I called this series, Baking with Boys. From the beginning of our relationship, I knew my boyfriend liked chocolate cake, but he always talked about the chocolate cream cheese cupcakes (black bottom cupcakes) his mother used to make.

The first birthday we shared together, I was super stressed about making the best black bottom cake I could, because he didn’t have the recipe. I guess I did okay since I am still around. Finally after several months he found the recipe from his mom. I was expecting something really fancy and complicated. Turns out they’re super easy to make. He has been requesting that I make them ever since. I guess he got sick of waiting. 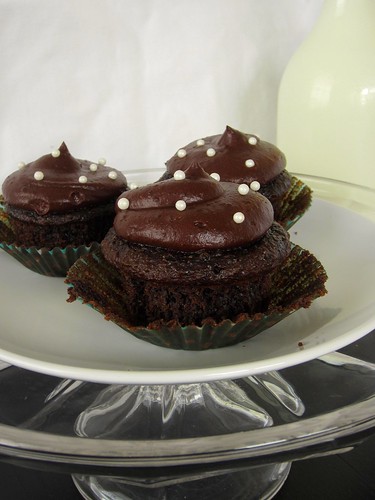 While I was busy shooting my Cadbury Cookie Brittle, he insisted on making black bottom cupcakes at 9 o’clock at night. He wanted to do it all himself, to which I of course said go right ahead, just clean up afterwards! I love watching him bake, because it makes me laugh every time.

He uses as few dishes as possible. This results in him melting butter in the glass measuring cup and using the same cup to measure ALL of his dry ingredients plus oil, milk and whatever else is required. I am going to tell the rest of this story in photos taken on my iphone. Read on, I promise it’s worth it.  Also, I should tell you that he edits my posts, and may or may not agree with my recount of the story.

He’s pretty serious about his measuring. As you should be. 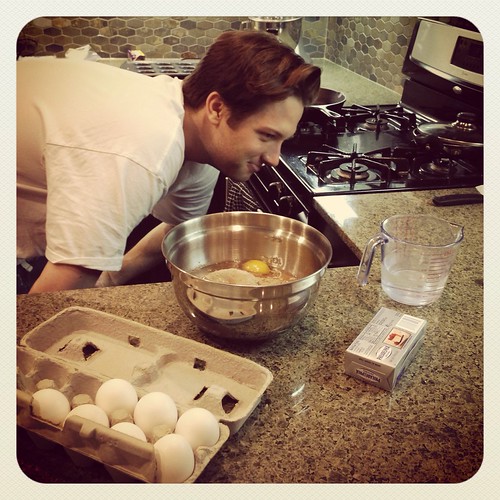 This is the face of concentration. He has two rules. His first rule is that he “doesn’t do eggs”, which means I have to be called in to crack the eggs. 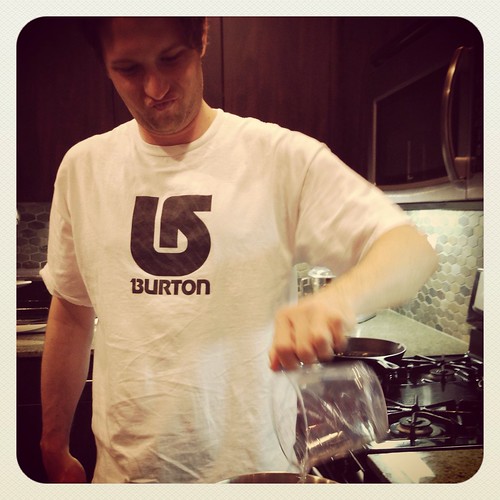 1 Box Chocolate cake mix plus ingredients listed on the box

I had to step in and teach him how to use my cookie scoop to measure batter (which helps keep the cupcakes the same size). It took him a little while to catch on. He is very concerned about dripping batter on the cupcake pan and I didn’t have half an hour to watch him fill 12 cupcake liners (Editor’s Note: Rude).

His second rule, is that no chocolate chips should be wasted. So if you have leftover cream cheese mix, be sure to pull out the chocolate chips and put them in a random cupcake. This is what your cupcake will look like before you put it in the oven. It’s pretty cool because the cream cheese ends up sinking to the bottom. I am not sure why they call these black bottom cupcake, because they were white (Editor’s Note: We don’t call them that, they’re just Cream Cheese Cupcakes. The “Chocolate” portion is implied and does not need to be stated since we see little value in cupcakes that are not chocolate). 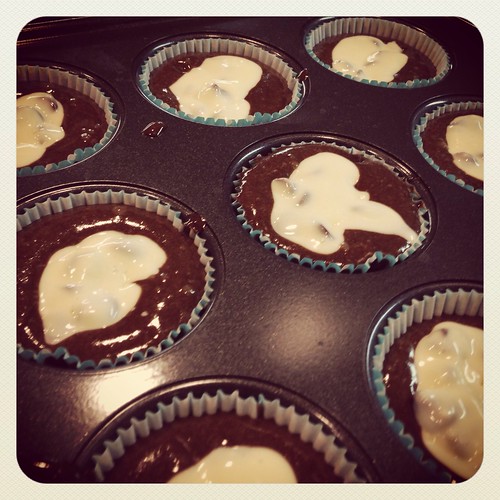 My boyfriend prefers a very chocolaty frosting, so he always adds more cocoa powder than what they call for. In this case, he added the rest of the container. “Well how much did you use, so I can tell me readers?” I asked. His response, “All of it, tell them not to be scared”. Boys. 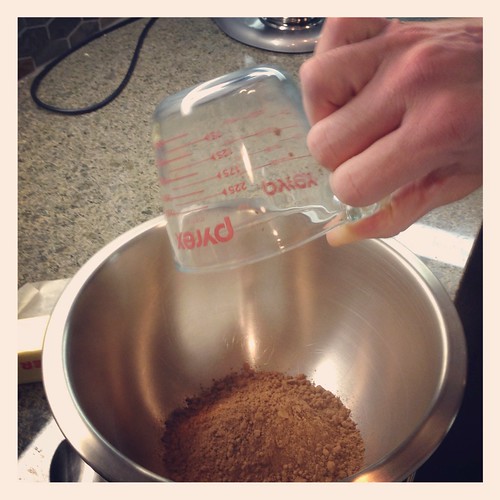 I believe that he was intending on mixing his frosting with a spoon, until he asked if he should be using “those beater things”. See? He is paying attention to me when I bake sometimes.

When it came time for him to add powdered sugar, he held up the bag, looked at what was left and said, “this looks like about 3 cups right?”. I replied with a simple, “no”.  He proceeded to measure out the powdered sugar while telling me that “never in my life have I been like, this frosting has too much sugar in it.” (Editor’s Note: I DID use all of it and then added more from a second container. It was the right decision.)

Lastly, he had to add the vanilla extract, for which he requested, “real” vanilla extract, whatever that’s supposed to mean (Editor’s note, not imitation). I also suggested that since he didn’t know how much cocoa he used, he might have to add additional milk.  He used ½ cup. Turns out he made the creamiest chocolate frosting I have ever had. It was delicious. 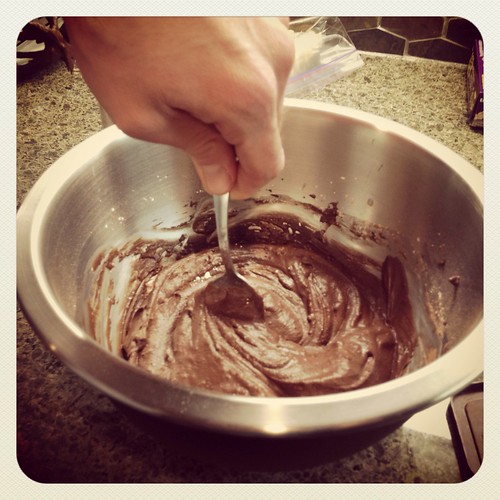 While the cupcake were cooling, and our frosting was done, he asked if he should use a piping bag to frost, only he didn’t use those words, nor can I the words to tell you exactly how he asked, but it was hilarious. I let him pick out a tip and helped him fill the piping bag. I know he has seen me frost hundreds of cupcakes, but I was going to step back and just watch him do it. Needless to say, I was very impressed. 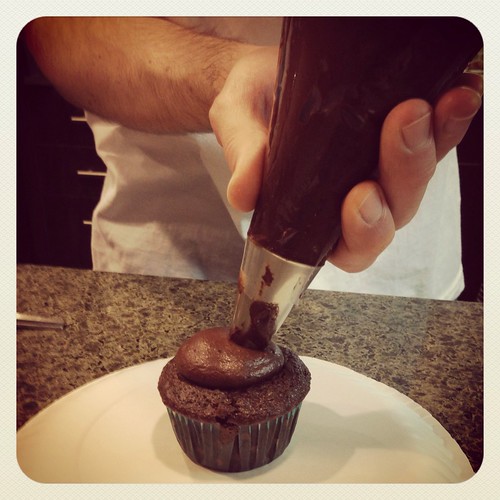 When it was time to step back and admire his work, he simply said, “see how I just nailed it on the first try?” Sigh, “yes babe, you sure did”. And then it was time to taste his creation. Although I did request he eat one of the less pretty ones, so I could shoot the cupcakes under a natural light, instead of at 10 o’clock at night. 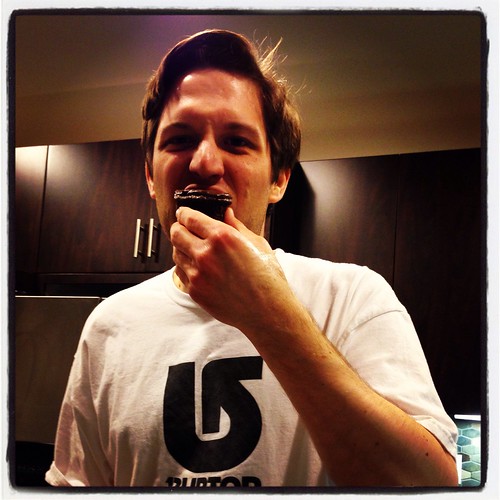 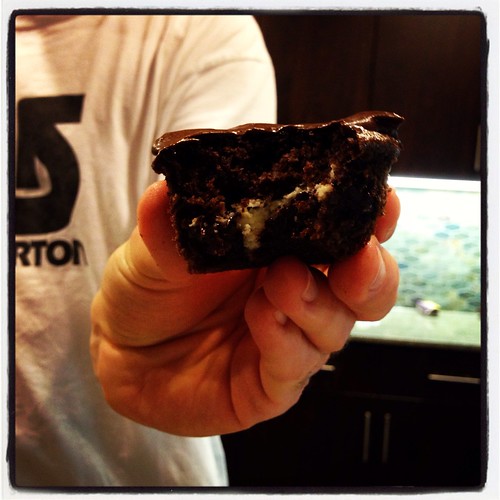 At some point during this process, I ran to grab my notebook to make sure I was accurately recording what was going on. It was pretty awesome to turn him loose and see what he could do. This man is a keeper for sure. (Editor’s Note: Well, yeah.) 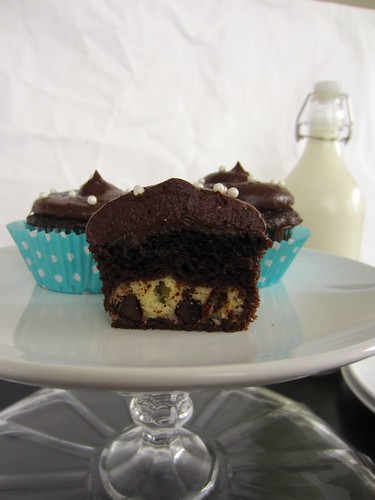 5 BAKE FROM SCRATCH SECRETS!
Subscribe to my newsletter and get my fav tips to take your cakes & cupcakes to the next level.
Skip to content
This site uses cookies to provide the best user experience. Learn More.