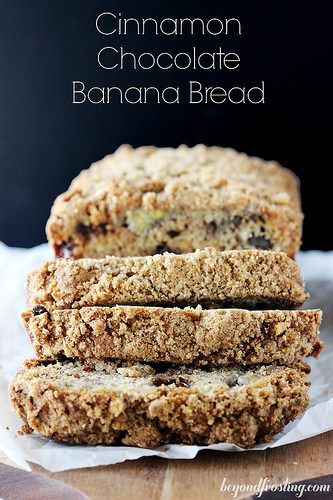 Hellooooo, November. I don’t know where October went, but I have a slight feeling you might be ready for a break from apple and pumpkin flavored desserts for a couple weeks. I mean, you know I will be making pumpkin pie for Thanksgiving dessert, but between now and then, I have a lot of great stuff to share with you! It starts with this Cinnamon Chocolate Banana Bread. Homemade breads are really much easier than you may think. This one doesn’t require a mixer, it comes together pretty quickly and you can customize it to your favorite flavors! I like my banana bread with chocolate chips and cinnamon. I packed an extra layer of cinnamon in this banana bread because I made the streusel with Cinnamon Toast Crunch Cereal. That’s right. It’s one of my boyfriend’s favorite cereals and a box doesn’t last long in our house. This recipe makes two medium-sized loafs or one large loaf and one small. The best thing you can do when baking breads is grease the loaf pan with Crisco and coat it in flour. I was actually able to shake my whole loaf out of the pan! My other tip is to try and fill your two pans as evenly as possible so that the baking time will be the same. I actually use a scale to measure out my batter and all of my ingredients. It helps ensure the most accurate measurements, which is super important when baking.The other special components in this bread are brown butter and buttermilk. Brown butter makes everything better; a lesson I only recently learned! If you do not have buttermilk, you can substitute regular milk.