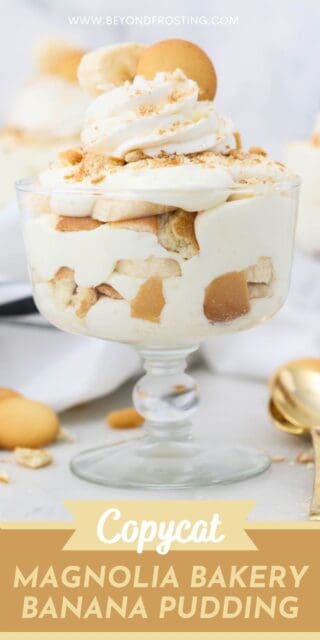 This easy banana pudding recipe is one of the best things I brought back from a recent trip to NYC. Even though I was visiting for my bachelorette party, I made time to visit the famous Magnolia Bakery. And boy am I glad I did!

I went in early August and I’ve been waiting to share this Magnolia Bakery Banana Pudding recipe ever since. It is so good you won’t be able to stop eating it. I ate the entire cup of banana pudding on my way back to the hotel, and though it meant I had to squeeze into the dress for my party it was so worth it. It’s so freaking good!

Trying Magnolia Bakery’s banana pudding has been on my dessert bucket list for quite some time. I’m so glad I finally did it. But then of course that meant I wanted to keep on eating it once I got home. That’s where this recipe comes in.

This is My Take on the Famous Magnolia Bakery Recipe

This is technically not the “true” copycat of the Magnolia’s Bakery recipe that they published in their cookbook. It’s an adaption – a mild one but still an adaption. The thing that makes their pudding so swoon-worthy is the sweetened condensed milk in the pudding. Oh heck yes!

What did I change?

What makes this banana pudding recipe truly delectable is how light and airy it is. It has a mousse-like in texture as opposed to pudding. It was so light and fluffy, like the fluffiest mousse ever. The pudding was layered with plenty of vanilla crackers, which were soft and cake-like.

When I got home, I Googled the banana pudding and found there were dozens of copycat recipes, so it was a bit of a no-brainer for me to try it.

You only need a few ingredients to make this easy banana pudding recipe. Here is a quick overview. Scroll to the recipe card at the bottom of this post for specific amounts:

Want to try making this old-fashioned banana pudding at home? Here’s how to do it:

Make the vanilla pudding: In a medium bowl combine the condensed milk and milk, whisking well. Add in the instant pudding mix and whisk again until combined. Cover and refrigerate until firm, which will take about 3-4 hours.

Assemble the pudding. I like to serve this as a parfait in small trifle glasses. It’s so easy! All you need to do is layer the mousse, Nilla wafter pieces, banana slices, and more mousse.

Chill & serve: Refrigerate for at least 2 hours before serving. If you’re feeling extra decadent, you can top the pudding with some homemade whipped cream. I also like to top the chilled pudding with extra cookies and banana slices.

Can I Make this Banana Pudding in a Pan?

Chill & serve. Chill your pudding in the fridge for at least 2 hours. Then scoop out the desired amount into bowls and top with more whipped cream, cookies, and banana slices.

Cover with saran wrap and store in the fridge for up to 2-3 days. The bananas will oxidize (brown) the longer the pudding is stored, but they are still fine to eat. If the browning bothers you, you can try brushing the bananas with a bit of lemon juice to help slow down the oxidation process. This will affect the flavor somewhat so use sparingly.

I pretty much had to put this dessert away with a lock and key, as I caught myself stealing a spoonful over and over again. I am certain this will happen to you if you try it. Certain.

This Magnolia Bakery Banana Pudding recipe is the real deal! It’s a made from scratch banana pudding you’ll absolutely love.

These can be made as individual trifles, one large trifle or layered in a 9-inch square or 9×13 inch pan. Depending on how you choose to serve, you may need additional bananas or Nilla wafers.