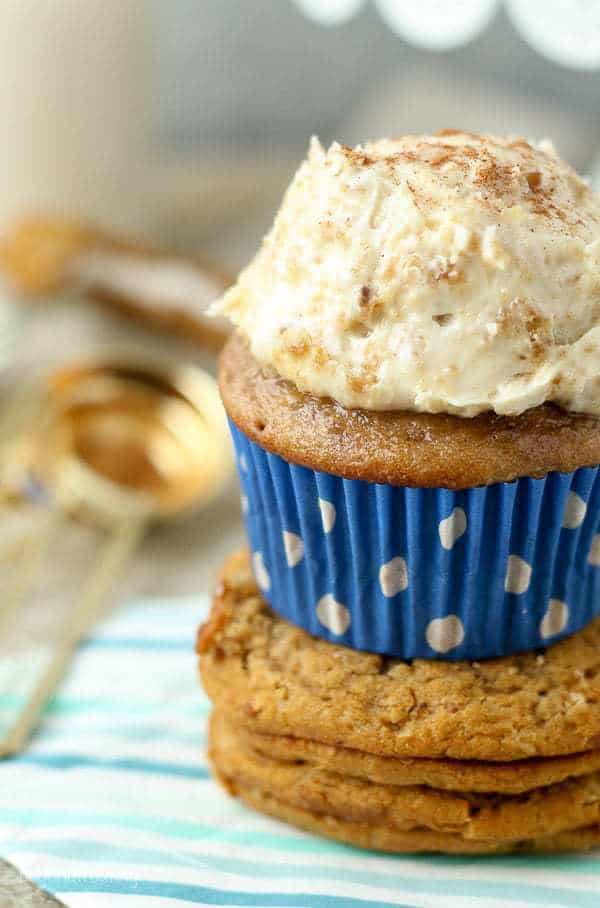 As we say goodbye to September, I do welcome October with open arms! This is kind of of a fun weekend for me because today is one of my best friends birthday and tomorrow is my mother’s birthday! My friend Alison lives in Massachusetts, so I don’t see her very often.  But I do recall a very memorable birthday of hers, and it was long before these Oatmeal Cream Pie Cupcakes.

You see, I used to tell people I was “allergic” to pretty much any type of Asian food, because I simply didn’t like it. Well Alison wanted to go to a teppan grill for one of her birthdays. She told me I could get chicken teriyaki and I would be fine. Which I was, until they started throwing things in the air and playing with the spatulas. 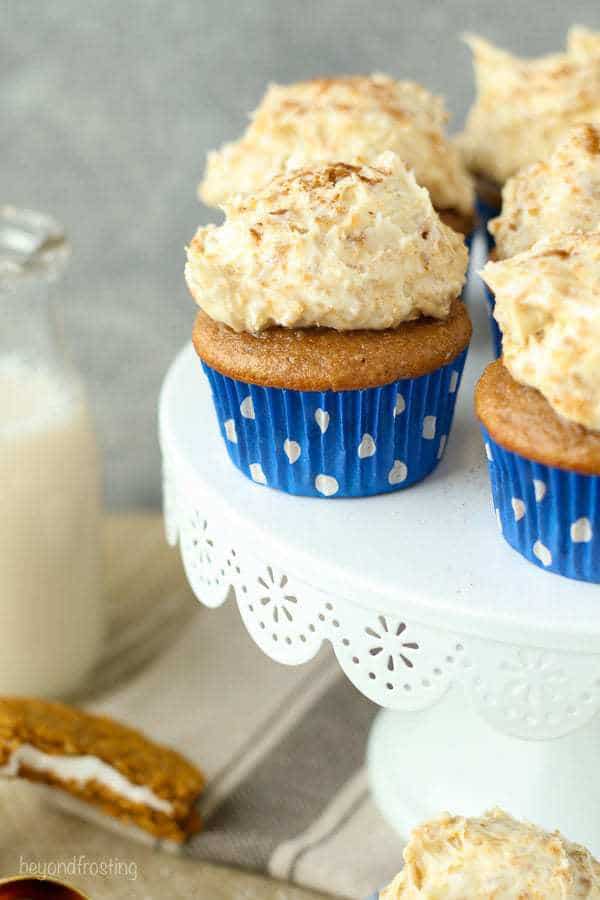 When the chef decided to throw me a piece of Zucchini to catch in my mouth, I politely denied him, and he wasn’t having it. Instead, he throws it my direction and it hits me square in the forehead. I was mortified.

Fast forward to my adult life, I have now traveled to Asia for work several times, and kind of love Chinese food (just not the crazy stuff). And to this day, every time I go to a teppan grill, I am pleasantly reminded of Alison’s birthday. I know, this has nothing to do with cupcakes, so let me get to the point. 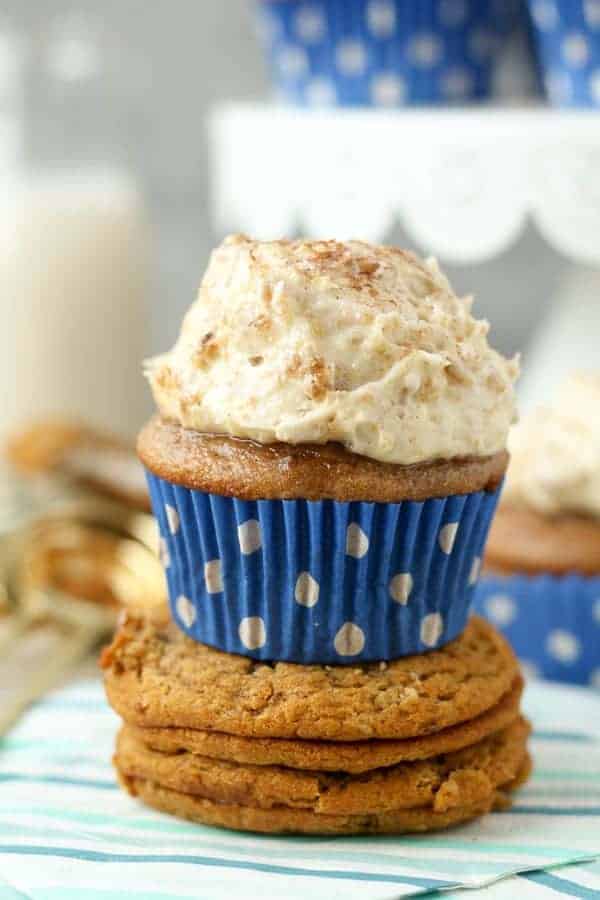 Prepare to put your sweatpants on because I am not sure if you will be able to stop at just one of these Oatmeal Cream Pie Cupcakes.  The combination of a sweetened brown sugar spice cupcake with an oatmeal cream pie frosting will just leave you begging for more.

This cupcake starts with a spice mix cake mix with some added brown sugar, cinnamon and nutmeg. I love altering cake mixes to come up with different recipes. There is so much you can do with a cake mix.

The frosting is a creamy marshmallow-cinnamon frosting with some Little Debbie Oatmeal Cream Pies mixed into the frosting. Seriously amazing stuff you guys.  Oatmeal Cream Pies always remind me of my summers at the lake during Girl Scout Camp. We always had bagged lunches and for whatever reason, this was such a treat to find in my lunch!

Maybe sometime I’ll even make my own homemade oatmeal cream pie bars. But for now, I am sticking with the real thing. 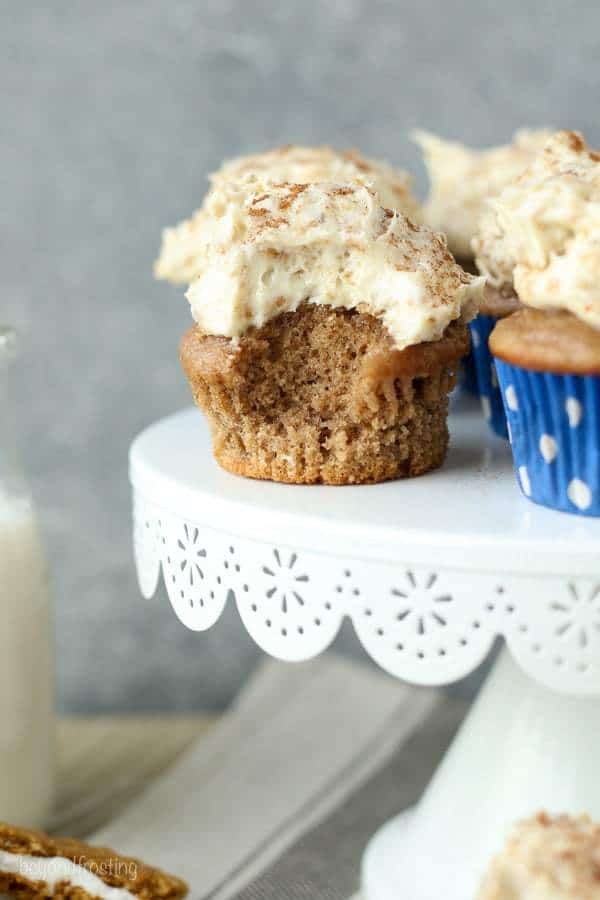 I have kind of been obsessing about an Oatmeal Cream Pie frosting, since I saw THIS CUPCAKE– WOW . I LOVE LOVE LOVE Oatmeal Cream Pies, but I simply feel so guilty eating them. So I hide my guilt by adding them into the marshmallow frosting. Problem solved.

Now I do love a healthy portion of frosting. So my frosting makes enough to generously frosting more than 24 cupcakes. You can see from my photos that I put a heaping scoop of frosting on each cupcake. I like to use a large cookie scoop since you can’t really pipe this. You could most definitely frosting an 8” or 9” cake as well. 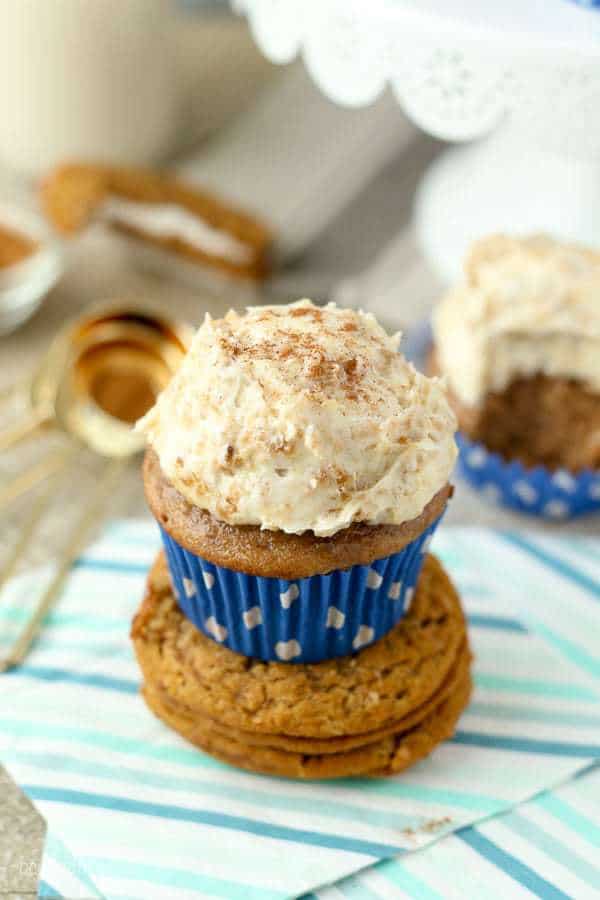