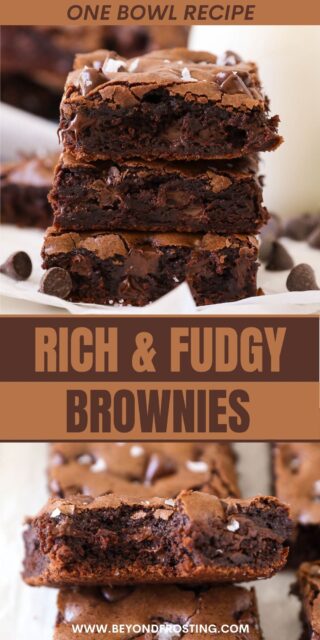 Quick and easy, these Cocoa Powder Brownies taste just like your favorite boxed brownie mix. They’re made with pantry staples and ready in 35 minutes!

Raise your hand if sometimes you reach for a box of brownies instead of making them from scratch. I know that I definitely have – sometimes it’s just so much easier! Now I just make these Cocoa Powder Brownies instead!

While most homemade brownie recipes do not usually have a leveling agent, I intentionally added one to this recipe. The baking soda prevents the brownies from being overly dense and fudgy, though they’re definitely not cakey either. It’s the perfect middle ground! (And some boxed brownie mixes, like our favorite Ghirardelli Double Chocolate, also contain baking soda.)

What’s the Difference Between These and Fudgy Brownies?

I’ve shared a handful of brownie recipes in the past, most of them variations on my fudgy brownies recipe. So what makes this recipe different?

Here are the main ingredients you’ll need for these homemade brownies. Scroll down to the recipe card to see the exact measurements and full ingredient list.

A Note On The Cocoa Powder

The key to making these brownies is to use natural cocoa powder, NOT dutch processed cocoa powder. (Learn more about the difference between the two here.) The reason for this is the baking soda in the recipe.

Baking soda requires an acidic ingredient to activate it in a recipe. Otherwise, you end up with a flat dessert and a metallic aftertaste. In the case of this brownie recipe, natural cocoa powder is the acidic ingredient.

If you use dutch processed cocoa, which is made from beans that have been treated with potassium carbonate, the baking soda will not activate and these brownies will not only not rise, they will have a not-so-pleasant aftertaste.

How to Make Cocoa Powder Brownies

This may be the easiest brownie recipe out there – it comes together in just a few quick steps!

Step 1: Combine the wet ingredients. Beat the granulated sugar with the oil, milk, and vanilla extract. Add the egg. Take care not to overbeat the eggs, beat just until combined.

Bake. Transfer the batter to the greased baking sheet lined with parchment paper. Add some extra chocolate chips on top. Bake for 18 to 22 minutes then cool before cutting.

Can I Make These in a Different Sized Pan?

I recommend an 8-inch square pan for the perfect thickness, but if you only have a 9-inch pan, that will work too. The brownies will just be much thinner and you’ll need to reduce the baking time by a few minutes.

This recipe can easily be doubled for a 9×13 inch pan.

Here are a few tips for making the best cocoa powder brownies – which may be different from what you would do for regular brownies.

I don’t believe there’s a wrong way to enjoy a brownie…but I will say that since these aren’t quite as dense and rich as fudgy brownies, they are perfect for making an ice cream sundae! Just add a scoop of vanilla ice cream, some chocolate syrup, and a maraschino cherry. Yum!

Or just enjoy with a glass of milk. (Bonus points if the brownie is warm.)

How to Store & Freeze

These homemade brownies will last for up to 3 days when stored on the counter in an airtight container. If you want them for a few extra days, store them in the fridge where they’ll last for up to 5 days.

To freeze the brownies, I recommend wrapping each one individually in plastic wrap. You can thaw in the fridge, on the counter, or pop them in the microwave for 15-30 seconds for warm brownies.

Quick and easy, these Cocoa Powder Brownies taste just like your favorite boxed brownie mix. They’re made with pantry staples and ready in 35 minutes!