Impress your friends with these luscious Lemon Cream Pie Cupcakes. A fresh vanilla cupcake with a delicate lemon mousse and topped with cream cheese whipped cream. 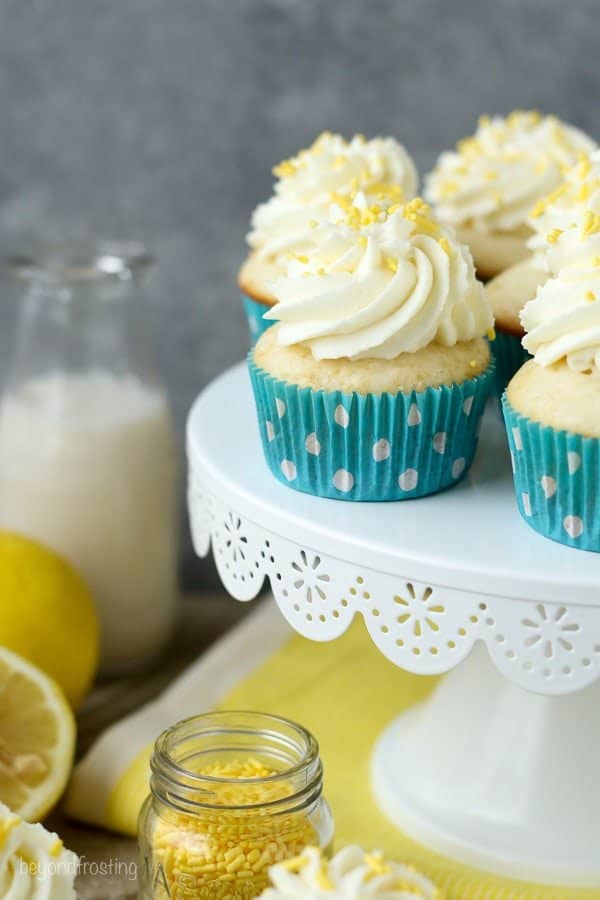 This post is sponsored by Rodelle. All opinions are my own. This was originally posted in 2015 and has since been updated in 2017.

There is nothing like sinking your teeth into the first bite of a cupcake and wiping that leftover frosting off your face. Sometimes you might think to yourself, “this cupcake is too pretty to eat”. I don’t have that problem. My first instinct is, I need to know what this tastes like, so I usually just dive right in. Ya feel me? 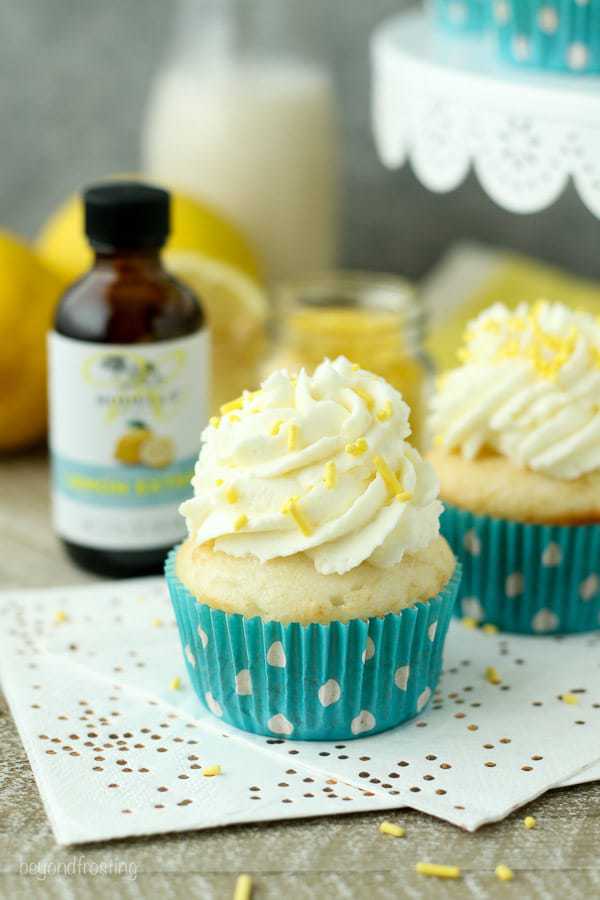 It doesn’t matter what time of year it is, these Lemon Cream Pie Cupcakes are the perfect excuse to bake. I’ve been holding onto this one for awhile and it’s finally time to share it! This is a light and fluffy vanilla cupcake with a lemon mousse filling and a cream cheese whipped cream. Can you say amazing? 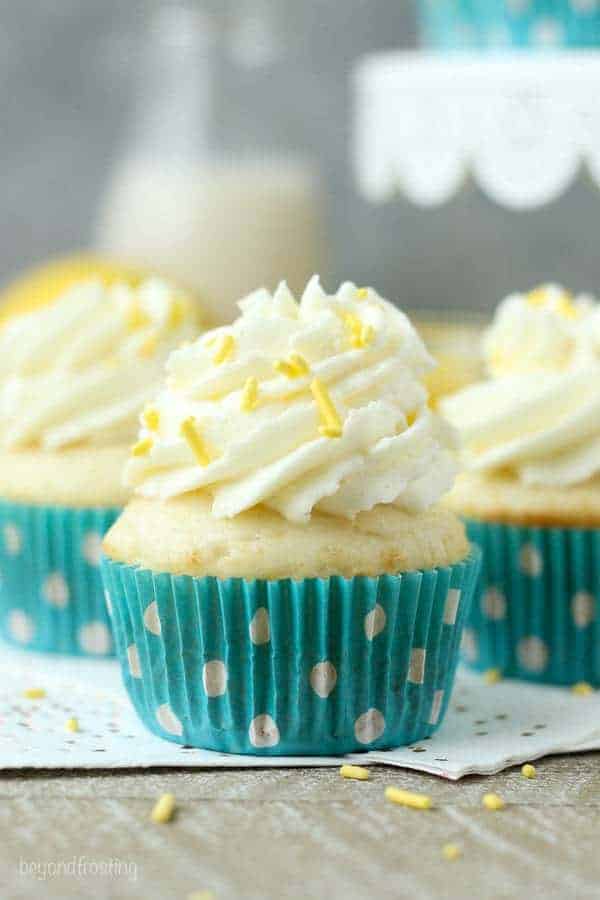 I decided that these cupcakes should be a vanilla based cupcake instead of a lemon cupcake. I didn’t want an overwhelming lemon flavor so I grabbed my Rodelle Pure Lemon Extract for the cupcake batter. This just gives it a subtle lemon flavor to compliment the filling without over powering it.

I fell in love with Rodelle products after I attended a baking retreat and had the opportunity to try their vanilla beans and extracts as well as baking cocoa. In my years of baking, I’ve come to realize that quality ingredients are essential for my kitchen. As I became more familiar with Rodelle beyond their vanilla products, I found myself reaching for the almond extract and now my bottle of lemon extract is almost gone to! 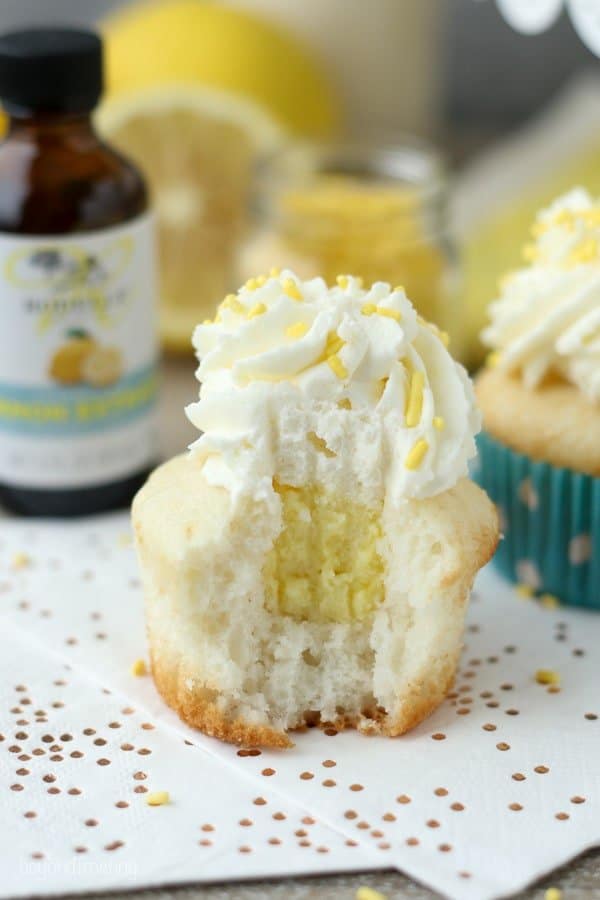 So back to these cupcakes. For simplicity, I used a classic vanilla cake mix, but the substitution of the buttermilk instead of water and the addition of the sour cream. This cupcake turns out to be quite moist and a lighter texture. Of course, you can use your favorite vanilla cupcake recipe but substitute the vanilla extract for lemon.

Now there are a couple steps involved between making the cupcake, the filling and frosting. One way you can cut out a step is to use a frozen whipped topping instead of fresh whipped cream in the mousse. I prefer the taste and texture of the fresh whipped cream, but I understand not every one wants to make it. So I like to provide the option.

Cupcakes are my favorite thing to make because the flavors can be so different every time. You can be as creative or as lazy as you want, and sometimes lazy cupcakes are the most delicious! Excuse me while I go make another batch of these Lemon Cream Pie Cupcakes. 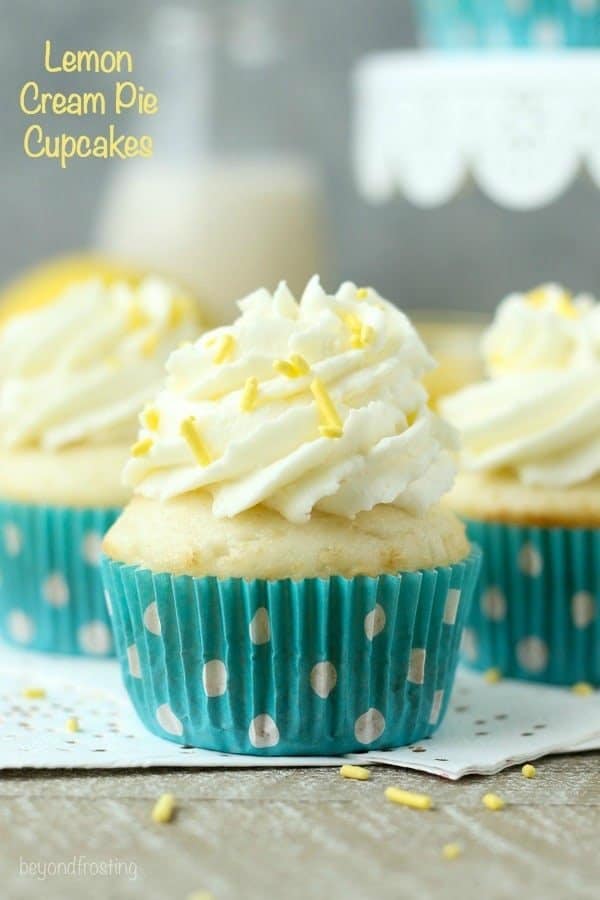 Impress you friends with these luscious Lemon Cream Pie Cupcakes. A fresh vanilla cupcake with a delicate lemon mousse and topped with cream cheese whipped cream.