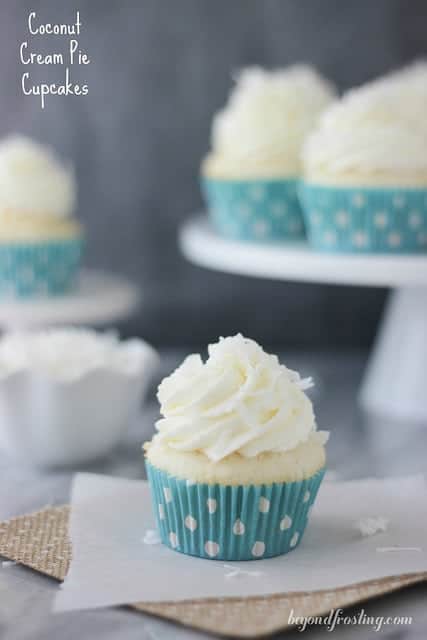 Yesterday was my dad’s birthday! I wished I could be there to celebrate with him, but as I am on the other side of the country, it is nearly impossible. Still to this day he likes to make himself an ice cream cake for his birthday. Growing up, we had ice cream cakes for most birthdays, which was awesome! However, what is a man to do with a 3-layer, 9” ice cream cake all to himself. Don’t think about it too hard, because the answer is to EAT IT!

After years of consuming his birthday cake for over a month, he kept talking about wanting to make a smaller cake! A couple years ago, I gifted him a set of 6” baking pans. Now he sends me a photo of his birthday cake every year, which I think is pretty special. I think he just needs to work on his food photography (insert emoji crying happy face!) Happy birthday day! 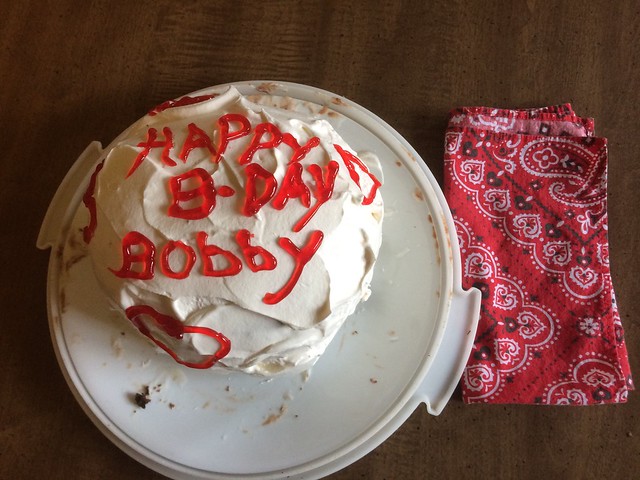 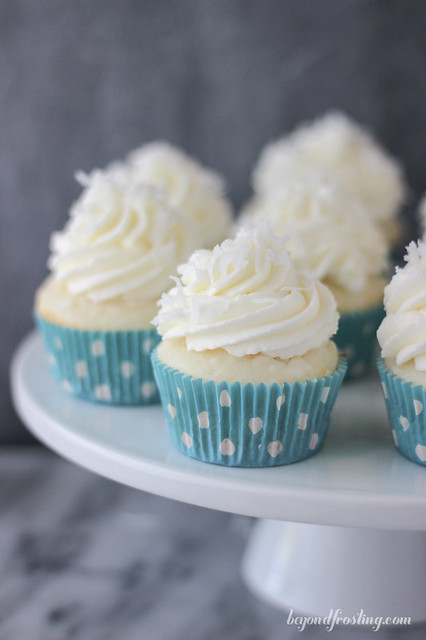 I am back today with these Coconut Cream Pie Cupcakes! I am so excited because I realized that I am seriously lacking cupcakes lately, and I am about to change that. Lately, out of nowhere, I have become obsessed with cream pies. Now I know I throw the term “obsessed” around here a lot, so I am trying to use it only when I mean that I am TRULY obsessed. It’s totally appropriate today and that is why I deemed these “best ever” coconut cream pie cupcakes. 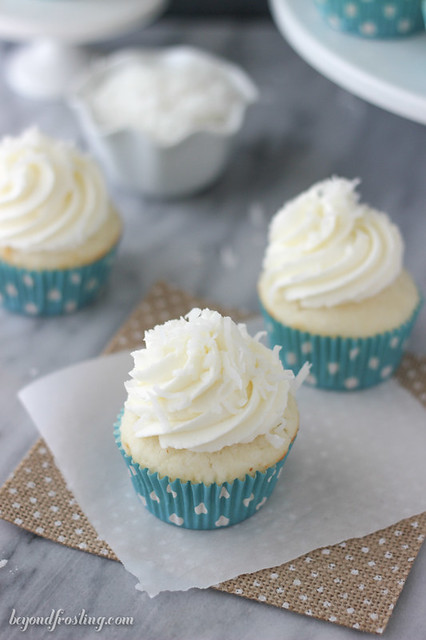 The cupcake starts with a cake mix. As I told you before, I do love baked-from-scratch desserts, but sometimes a cake mix just makes sense. I added shredded coconut to the batter of these cupcakes, so the texture is a bit different than a traditional cupcake, but it totally works here. I also added a teaspoon of baking powder to help these rise a little higher. 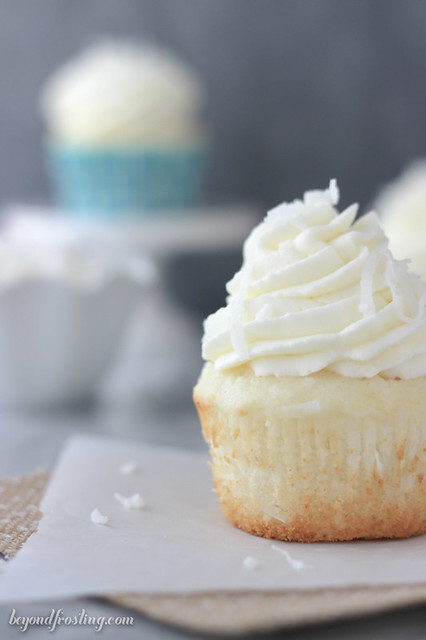 Instead of regular milk, I used coconut milk for this recipe. I am sure you could substitute regular milk, but the coconut flavor will not be as strong. I was a first-time coconut milk user before this recipe. You can find it in the section with Asian foods, and be sure it is well mixed before you add it into the batter. When I opened my can, it was separated. Just give it a good stir first. 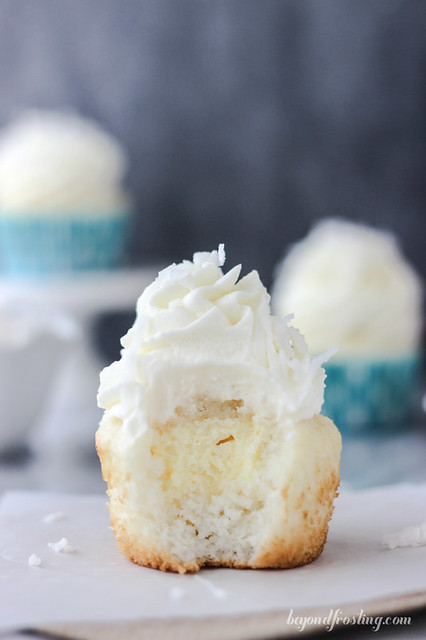 While I like so many different cupcakes, I tend to think that ones with the fillings inside are probably my favorite. How do you feel when you bite into a cupcake and get an unexpected surprise of awesomeness? Pretty good right? That is just one of many reasons why I absolutely LOVE these cupcakes. 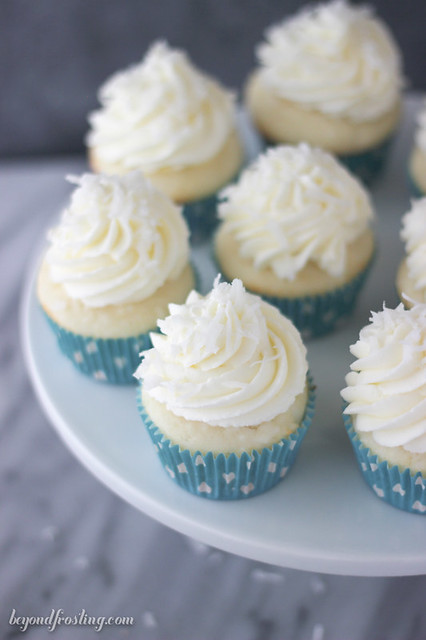 Let’s talk about the filling. I first made this filling when I made Coconut Cream Pie Cookies. The filling is U-N-R-E-A-L and so easy to make. All it takes is a box of instant vanilla pudding, coconut extract and some home made whipped cream. Now I know you are probably rolling your eyes about the home made whipped cream but honestly, it is really easy to make and it is completely different than Cool Whip. In fact, it’s also WAY better than Cool Whip. So the filling, yes, it’s amazing. 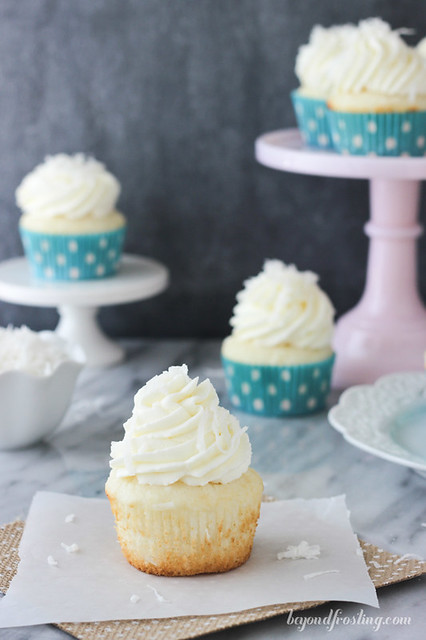 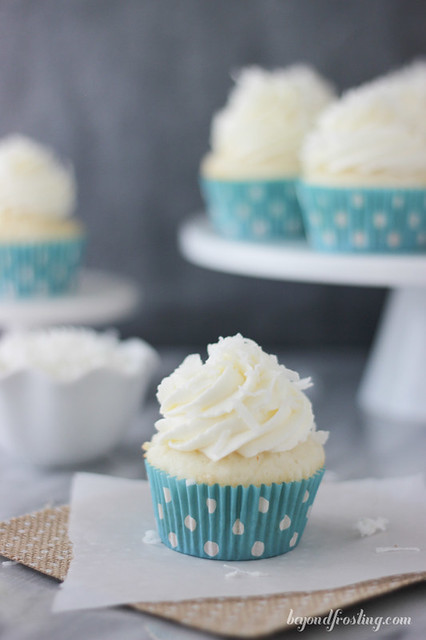 With the combination of the coconut cupcake, the coconut mousse filling and the cream cheese whipped cream topping, you sure can’t go wrong with these cupcakes.

Coconut Angel Food Cupcakes from I Am Baker