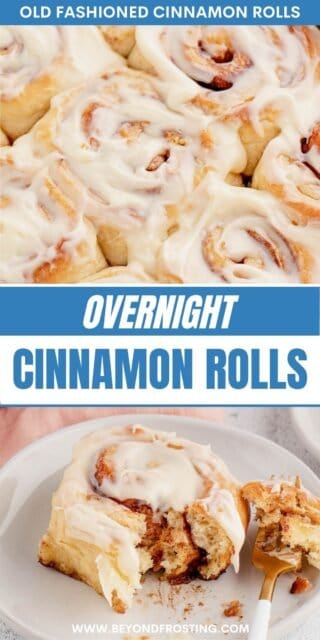 Luckily, despite the time it takes, it’s easy to prepare the rolls the night before, and they’re ready to pop into the oven when you wake up! These homemade cinnamon rolls come out buttery and tender, filled with sweet cinnamon sugar rolled up in a delightfully flaky dough. One bite and you’re in heaven.

I adapted this recipe from my great-grandmother’s sweet rolls. The original is a generational recipe that “Mama Girl” passed down to all of us, so it’s definitely stood the test of time! This is a Christmas morning tradition in our house. You’ll see why.

Why You’ll Love This Recipe

What makes these the best-ever cinnamon rolls? Here’s why this recipe is a keeper:

These overnight cinnamon rolls call for just a few pantry ingredients. Below are the primary ingredients you’ll need to make the rolls as well as the delectable cream cheese frosting. Don’t forget to check out the recipe card with the full amounts:

How to Make Overnight Cinnamon Rolls

Mama Girl’s overnight cinnamon rolls come together in three rises: two rises the day before, and a third rise prior to baking the next day. Below we’ll go over how to make these legendary cinnamon rolls completely from scratch.

Let’s start by preparing the cinnamon roll dough for its first and second rise. Here’s what to do:

Dissolve sugar in warm milk: Begin by heating the milk with butter and sugar in a saucepan. The sugar should dissolve and then leave the mixture to cool until it reached 110ºF or less. I usually pop my milk mixture into the fridge to speed things up a little. This process is called “scalding the milk,” and it’s an old-timey method to ensure fluffy, airy cinnamon rolls!

Activate the yeast: Meanwhile, activate the yeast with a bit of sugar in a glass of warm water (You’ll want the temperature to be 100-110ºF, any higher and it risks killing the yeast).

After about 8-10 minutes, the mixture should be foaming and bubbly, growing to about 1 cup of foam. If it hasn’t activated, this could be a sign that your yeast is expired. In this case, discard the mixture and start again with fresh yeast.

Once the milk mixture has cooled, whisk in the egg followed by the yeast mixture. Next, you’ll combine the flour with the milk mixture until you reach a thick, wet consistency. Cover the bowl with plastic wrap, then move it to a warm place to rise for one hour.

This is what your dough should look like after the 1st rise. It’s grown in size, but still quite a soft and more liquid like consistency.

Add the additional dry ingredients: After about an hour, the dough will be ready for the second rise. First, whisk together the flour, baking soda, baking powder, and salt. Add these dry ingredients to the wet dough and form a ball. You may need to add additional flour if your dough is still on the wetter side. The dough ball is ready to knead when it no longer sticks to the sides of the bowl.

Lightly knead: Knead the dough on a floured work surface to get it soft and pliable. Then, place the kneaded dough ball into a large bowl and cover it with a fresh layer of plastic wrap.

Rise: Leave the bowl in a warm spot until the dough is doubled in size (this usually takes about 3 hours).

After the second rise (about 3 hours later) the dough should have grown to fill the mixing bowl and the consistency will resemble a true yeast dough.

Shape the dough: Once again, knead the dough on a floured surface. Next, shape and roll the dough into a large, flat rectangle about a ¼ inch thick. Now, it’s ready for the cinnamon roll filling!

This recipe keeps it classic with a buttery cinnamon sugar filling. Here’s how easy it is to fill and roll your cinnamon roll dough:

Roll and cut the dough: Next, roll the rectangle up lengthwise into a tight log and pinch it closed with the bare, buttered edge from earlier. Finally, cut the log into 12 even-sized sections. These are your cinnamon rolls!

Refrigerate: Place the rolls into a lined or greased baking dish, cover them with plastic, and pop them into the fridge overnight.

Before you bake them, the cinnamon rolls will need to undergo a third and final rise the next morning:

Third rise: Take your cinnamon rolls out of the fridge and swap the plastic covering for a light dishcloth or towel. Place the rolls in a warm location to rise for an additional 1-2 hours. After this time, your cinnamon rolls should have risen to the point that they’re touching each other in the pan.

Bake: With the oven preheated to 375ºF, bake the cinnamon rolls until they’re lightly golden brown. Once they’re out of the oven, they’ll need to cool for a bit before you frost them.

Once the cinnamon rolls have cooled off a little, it’s time to frost them!

Make the frosting: To make a quick icing, beat together cream cheese, melted butter, milk, and vanilla, then finally add the powdered sugar. Beat until the frosting is smooth and combined.

Spread over the rolls: While the rolls are still warm, smother them with a generous layer of cream cheese frosting. Then, they’re ready to serve!

Here are some bonus tips to ensure that your overnight cinnamon rolls come out perfect:

What’s the difference between cinnamon rolls and cinnamon buns?

How long can I keep unbaked cinnamon rolls in the fridge?

These unbaked make-ahead cinnamon rolls can be kept in the fridge for up to 24 hours. After that, you may find that the filling leaks out.

I can’t think of a better combination than Mama Girl’s overnight cinnamon rolls and a cozy, warm cup of coffee in the morning.

These easy overnight cinnamon rolls always make an appearance over the holidays in our house. I love serving fluffy homemade cinnamon rolls for family brunch with bacon and eggs, and other favorites like Crispy Lemon Potatoes and Quiche Florentine.

Of course, no brunch (festive or otherwise) is complete without Prosecco Mimosas!

Store these homemade cinnamon rolls airtight at room temperature for up to 2 days. They’ll also last up to 4 days in the fridge.

To reheat, I pop my cinnamon rolls into the microwave for a few seconds until warmed through. If you do plan on having quite a few rolls left over, you should consider leaving the frosting off until you’re ready to serve them. This way the frosting won’t melt off when you go to warm them up!

Can I Freeze Cinnamon Rolls?

I recommend freezing these rolls while they’re still unbaked. Once the rolls are cut and in the pan, wrap them tightly in plastic wrap and freeze them instead of placing them in the fridge overnight. They can be stored frozen for up to 1 month.

Fluffy and sweet Overnight Cinnamon Rolls are prepared ahead of time for a less stressful morning! An easy homemade cinnamon rolls recipe with cinnamon sugar and creamy frosting.