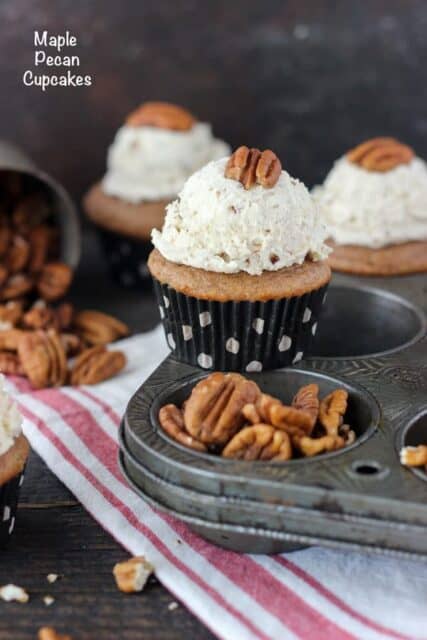 Celebrate fall in the best way possible – by whipping up a batch of these Maple Pecan Cupcakes! They’re topped with a creamy brown butter pecan frosting for the ultimate autumn treat.

The Best Homemade Cupcakes for Fall

This recipe is sponsored by Nuts.com, all opinions are my own.

As the nights get cooler, and it takes longer to warm up during the day, I am reminded with how much I love fall. I think about turning on my oven, mixing up some cake batter and waiting for my house to fill with smell of toasted nuts, cinnamon and brown butter. These flavors make for the perfect cupcake.

These Maple Pecan Cupcakes are a spiced maple cake with toasted pecans and a brown butter pecan frosting. I think it should be a requirement that all frosting has brown butter in it from now on.

This recipe starts with a cake mix, but it’s what inside that makes it special. I’ve added cinnamon & nutmeg, some light brown sugar, Greek yogurt, maple syrup and toasted pecans. I lightly toasted the pecans while the oven was preheating and then chopped them up and threw them in the batter. There’s no shame in using a cake mix, because you can definitely make it your own.

The frosting for this recipe start with a similar frosting I used on my Salted Caramel Butterscotch Cake. Then I saw this maple pecan frosting and I knew a combination of the two would be just perfect. In fact, the same coworker who went gaga for that cake took the last 4 cupcakes back to his desk to enjoy the following day. I can’t argue with that!

For the frosting, you’ve got a brown butter base-frosting recipe and it’s loaded with toasted pecans, a hint of bourbon and some maple syrup. The bourbon is optional, and I would suggest substituting with heavy whipping cream instead.

The secret to using the brown butter in the frosting is to brown it first (while your other butter is softening) and then allow it to cool. First you need to build the base of the frosting with the softened butter and powdered sugar and get it nice and thick before you add the liquid browned butter.

Since this is a chunky frosting, I opted to use a cookie scoop to put the frosting on top of the cupcake and garnished it with a pecan. I’m obsessed with the way the scoop of frosting looks on top.

I got a gorgeous bag of pecans from my friends over at nuts.com. I first heard about nuts.com when I was looking for bulk sprinkles. You guys have no idea how many sprinkles I go through in a year! It’s too expensive to buy the smaller jars in the baking aisle, so I sought out somewhere to buy bulk sprinkles.

When nuts.com asked to stock my pantry I was more than excited about it. I got to pick out a few of my favorite things and some fun surprises as well. I go through quite a bit of baking items in my house, especially when I was writing my cookbook.

You guys, those pretzels did not last long! Plus I got a large bag of sprinkles and my day was absolutely made.

Coming up in October is our annual cookout at the pumpkin patch. I, of course, always make desserts and usually bring some fall-themed cupcakes. These babies might just make it into the lineup this year!

Celebrate fall in the best way possible – by whipping up a batch of these Maple Pecan Cupcakes! They’re topped with a creamy brown butter pecan frosting for the ultimate autumn treat.

For the Maple Pecan Cupcakes

For the Brown Butter Pecan Frosting