These homemade moist pumpkin cupcakes are light and fluffy, and packed with real pumpkin flavor and spice. This easy pumpkin cupcake is an all brown sugar cake recipe with maple syrup, cinnamon and pumpkin spice flavors. These cupcakes are topped with a silky cinnamon maple cream cheese frosting. 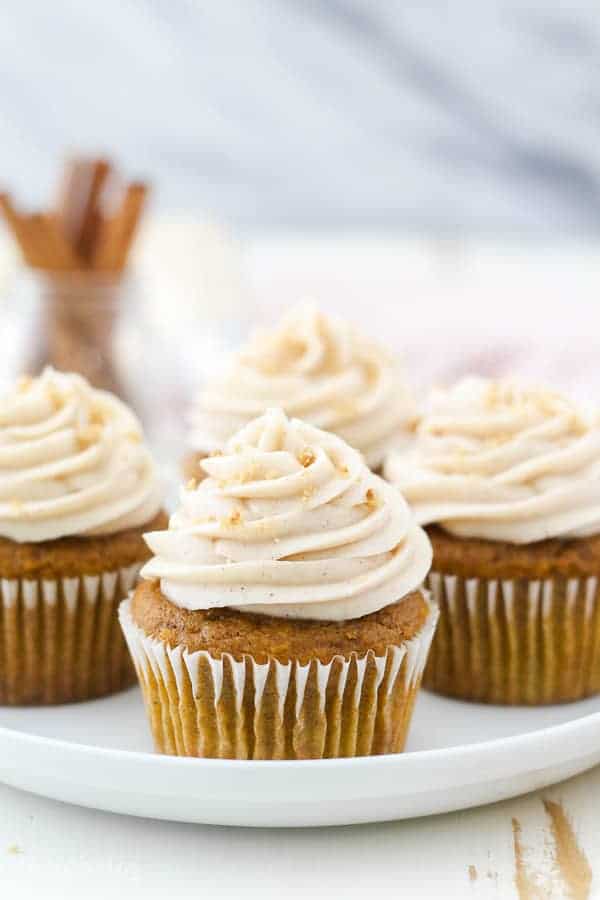 People often tell me that they don’t understand how I can resist the desserts that I make. I guess when you’re around at all the time it becomes less tempting, and thank goodness for that!

However, I’m human and I certainly have my weaknesses. One of these includes anything pumpkin- especially pumpkin cakes and bread!

Last week I started working on a recipe for a homemade pumpkin cupcake. I have a couple different versions that use cake mix but I really wanted one that was baked from scratch. 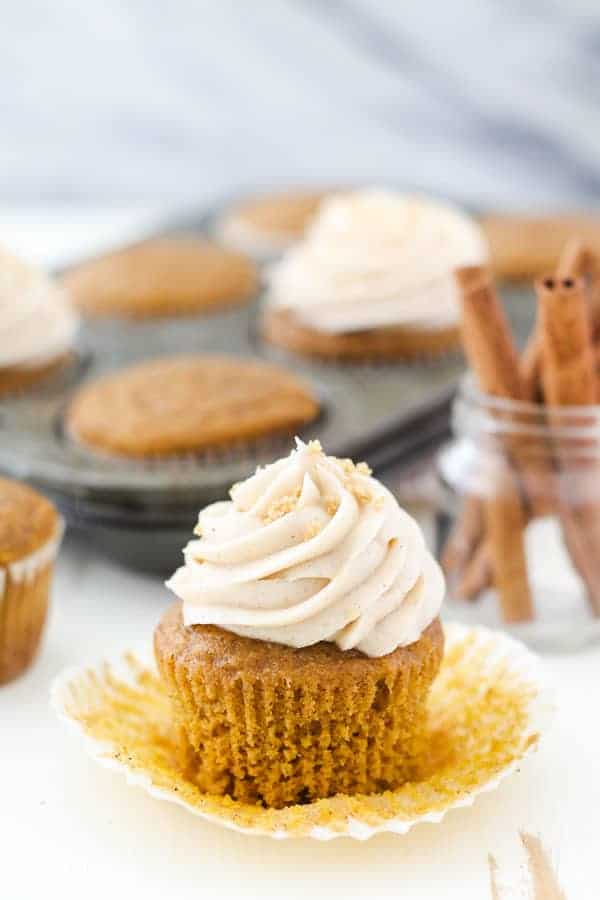 When the first batch came out of the oven I was so pumped, it was delicious it was moist and it had plenty of pumpkin flavor. But I also thought I could do better.

I continued baking cupcakes making small adjustments along the way until I found my favorite recipe. The following day I bought three versions of the cupcake recipe to work and asked my coworkers to do a taste test to determine their favorite.

It was a tough decision between recipe number one and recipe four but alternately recipe four was voted on unanimously. 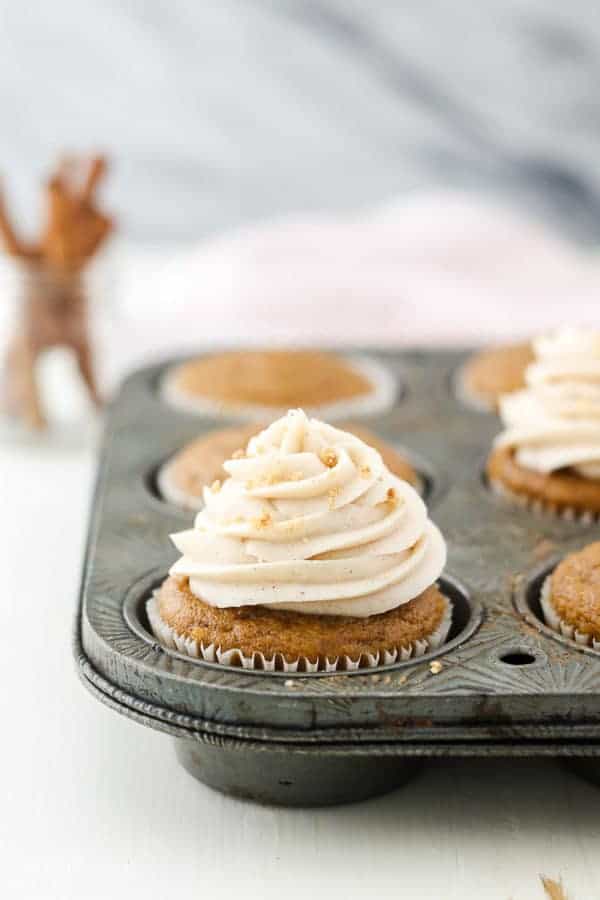 These homemade moist pumpkin cupcakes are light and fluffy, and packed with pumpkin flavor. These cupcakes are topped with a silky cinnamon maple cream cheese frosting. Does it get any better?

This recipe uses all brown sugar, which I found to really bring out the molasses under notes in these cupcakes. I also added a touch of maple syrup and equal parts pumpkin pie spice and cinnamon. I wanted these cupcakes to have a real spice flavor.

Sometimes I think it can be difficult to find a moist pumpkin cake that is both flavorful and also light and fluffy, but I am pleased to say that I achieved this task. The oil in this recipe helps maintains a really tender crumb. 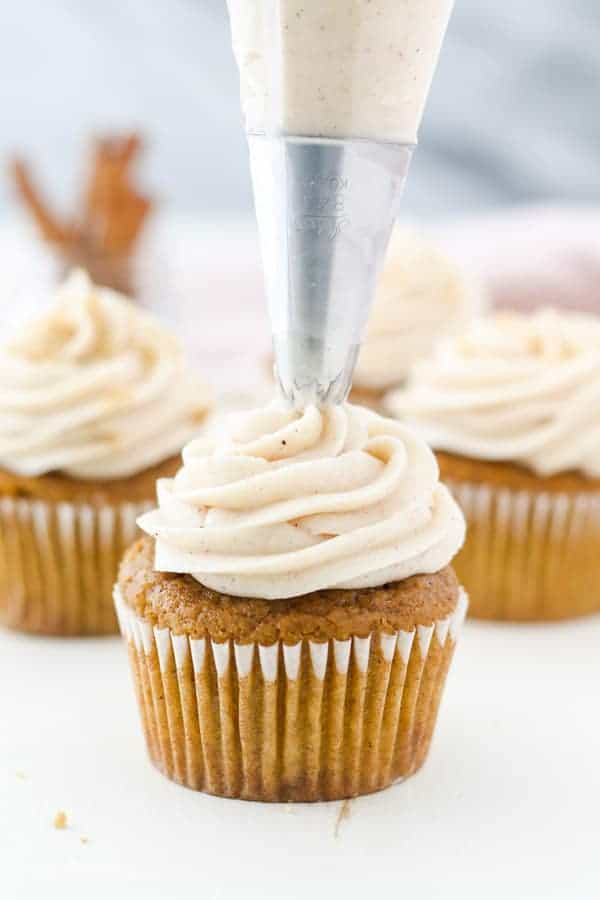 Since choosing a winner, I’ve also baked this as a 9 x 13” cake and as a three layer 8-inch cake just to be certain that it works across multiple recipes. This means more pumpkin cake recipes are coming!

I even made this recipe for a baby shower this past weekend. I dropped these off at my friends house, and within less than 60 seconds of leaving I received a text message: “Welp already crushed one. They are stupid amazingly good.  Thank you so much!!”

I can say without a doubt these pumpkin cupcakes are a winner. Plus, this recipe is so easy to make, you can use a hand mixer or even mix it by hand if you so choose. 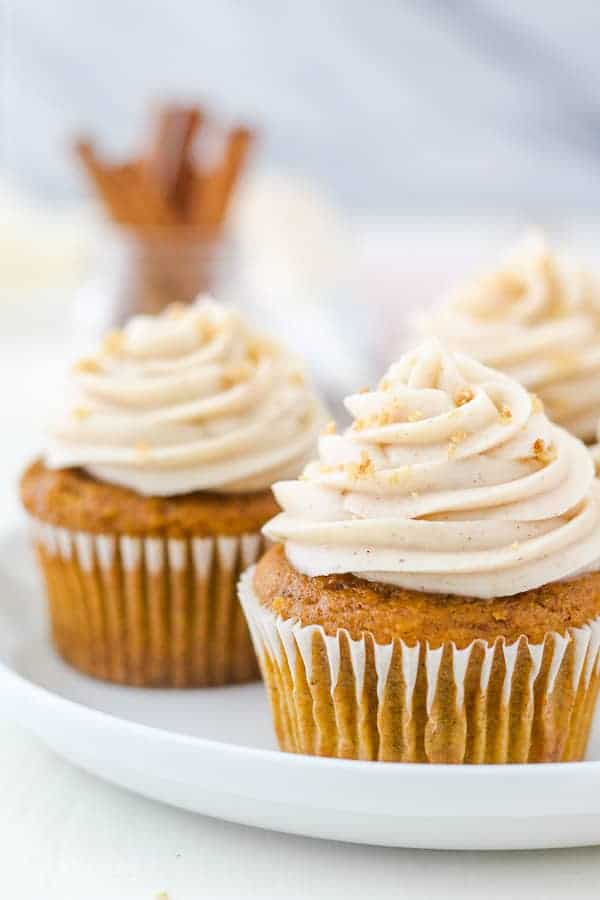 Once I had the cupcake recipe down, it was time to choose a frosting recipe.

I added a little bit of maple syrup and a pinch of cinnamon to the cream cheese frosting just to elevate the flavors and complement the cupcake recipe, which also has maple syrup. 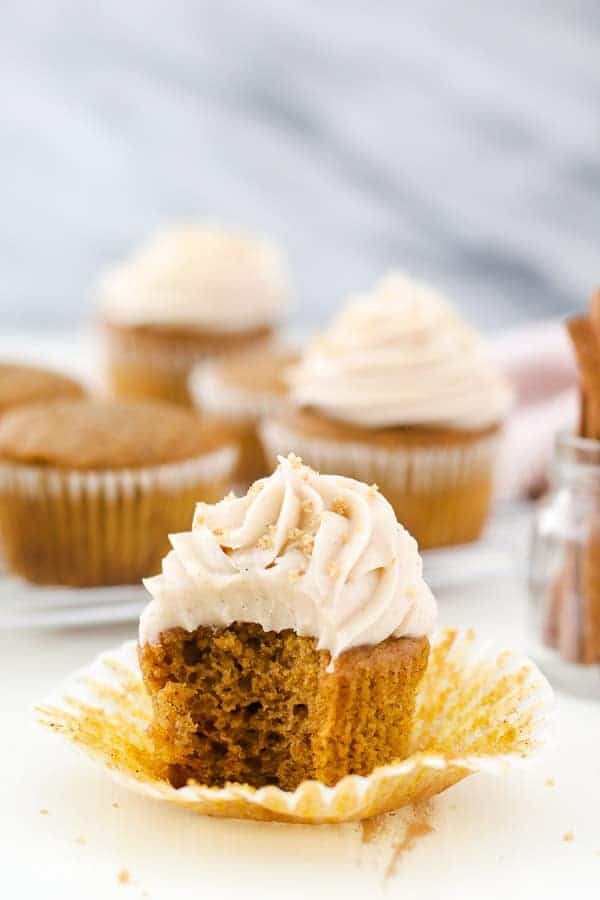 I’m a bit obsessed with my cream cheese frosting, it’s silky smooth, not overt sweet and just melts in your mouth.

For this recipe I start with cold butter and cold cream cheese. This helps produce a more stable cream cheese frosting for piping.

Sometimes I like to put it in the fridge for 20 minutes or so before piping to let it firm up a bit more.

You can also prepare the frosting in advance and then pipe it the next day, which I often do. Store it in an airtight container. Just take the frosting out of the refrigerator about an hour before you want to frost your cupcakes. 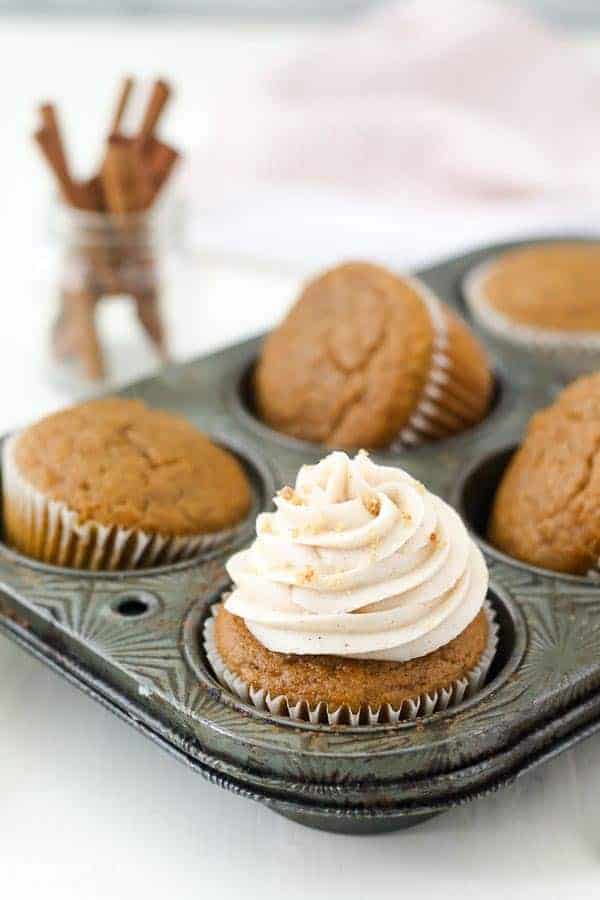 For 24 cupcakes, you’ll have more than enough frosting to go around and then some. I’m sure you’ll find an excuse to use up the rest! Cinnamon rolls anyone? Yeah, that’s that’s what I thought!

Can I make this as a layer cake?

Can I freeze these cupcakes?

I don’t recommend freezing the frosted cupcakes. You can however prepare the cupcakes in advance and freeze them. To freeze them, place the cooled cupcakes on a sheet pan and flash freeze, uncovered for 20 minutes or so. Transfer to an airtight container to store in the freezer.

Slowly thaw to prevent additional condensation by first thawing in the fridge for several hours then transfer to the counter top and thaw until they reach room temperature.

Frost the cupcakes once completely thawed.

These homemade moist pumpkin cupcakes are light and fluffy, and packed with real pumpkin flavor and spice. This easy pumpkin cupcake is an all brown sugar cake recipe with maple syrup, cinnamon and pumpkin spice flavors. These cupcakes are topped with a silky cinnamon maple cream cheese frosting.