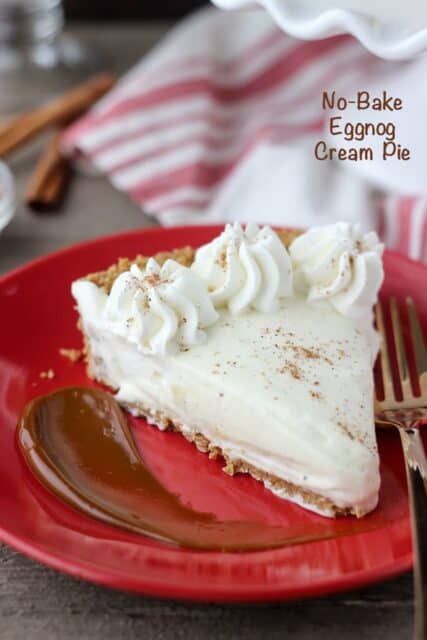 Leave room for dessert because this No-Bake Eggnog Cream Pie requires seconds. The light and airy eggnog mousse sits in a graham cracker crust. This is made with a homemade eggnog pudding mixed with whipped cream and spiked with a hint on whiskey. 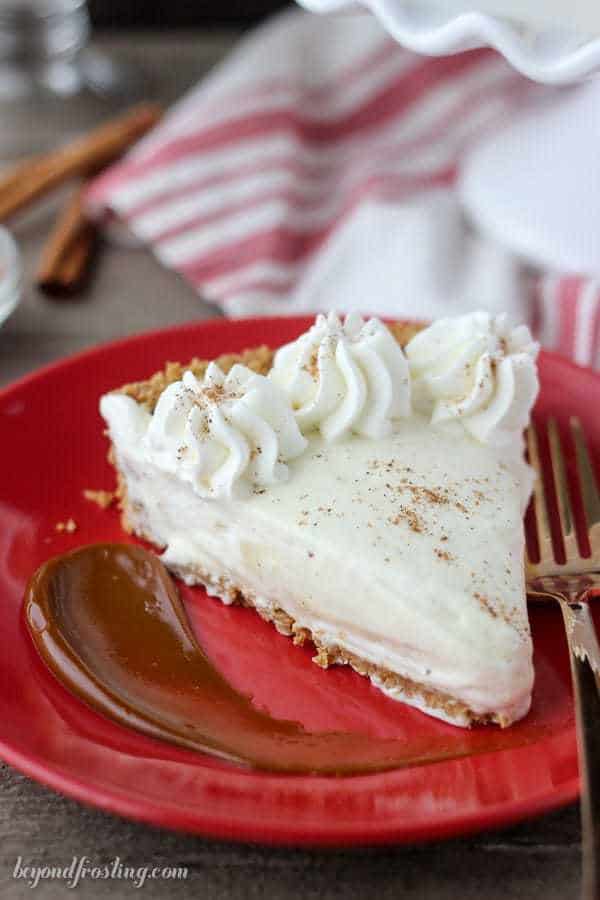 Alright friends, I can’t hold out any longer, I’m busting out the eggnog. With Thanksgiving only a day away, I’m definitely using every opportunity I get to introduce eggnog into my holiday diet. It’s all about making positive changes this holiday season. Ya feel me?

Something amazing happened the last time I had a carton of eggnog. I added it to my coffee thinking I could try the whole eggnog latte thing. Boy, was I missing out. Why did I wait so long to try this?! I’m totally hooked. I just need some skim milk eggnog or something to keep the calories down so I’ll have more room for dessert. 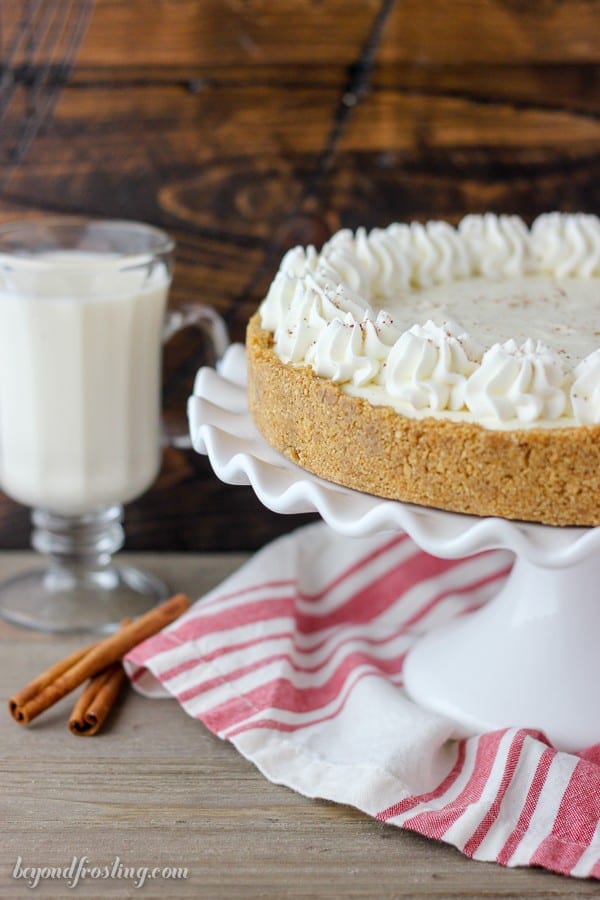 While we’re talking dessert, let’s chat about this No-Bake Eggnog Cream Pie. If you’re scrambling for last minute Thanksgiving desserts, be sure to check out all my No-Bake desserts. This pie requires two steps with some waiting time in between, so it’s not the best last-minute dessert.  It more of the make-it-ahead-and-forget-it type of dessert.

This is a homemade pudding recipe, inspired by a recipe from my cookbook. For my book I did eggnog pudding parfaits. This time I want to make a light and fluffy pie. I also decided to use vanilla beans to enhance the flavor of the eggnog and finished it off with a touch of bourbon. 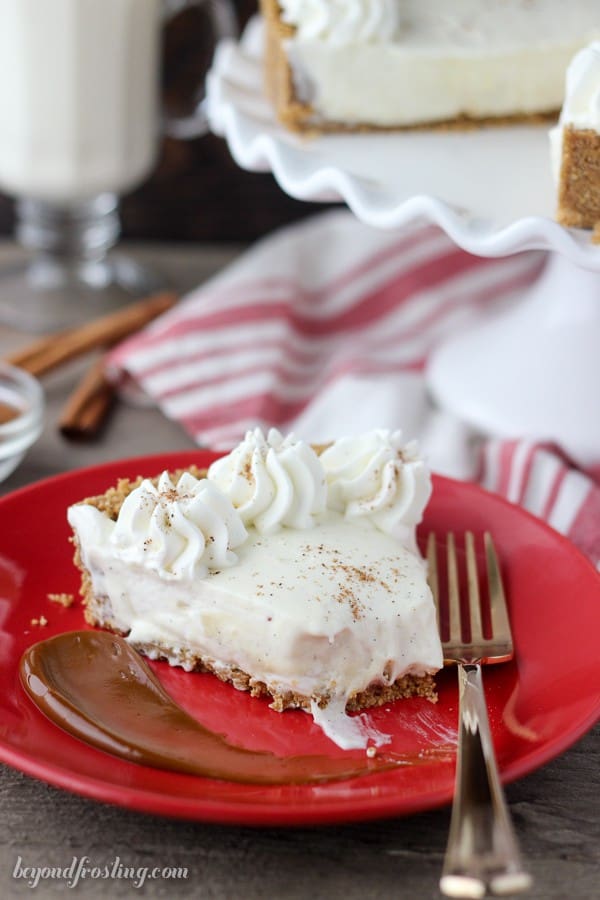 I only bust out the vanilla beans when there is truly a special dessert, because depending on where you buy them, they aren’t cheap. World Market has the best deal, they are only a few dollars for 2 beans. You could consider using vanilla bean paste instead of the actual beans. If you don’t have either of these, then an extra touch of vanilla extract will do just fine. 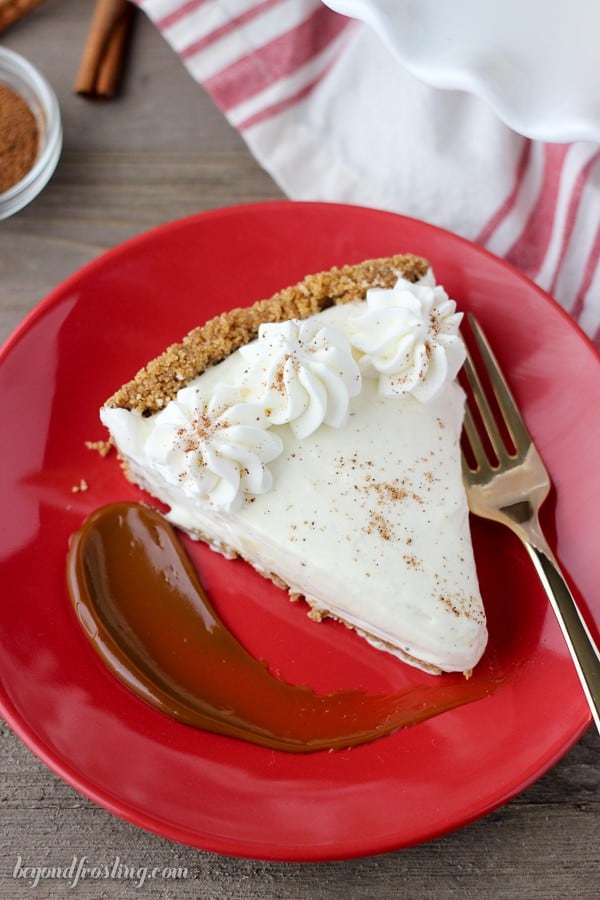 The pudding is quite easy, just prepare everything before you start. You will start with some cold water and gelatin. Just place the water in the pot and sprinkle the gelatin over top, then let it firm up. Then turn on your stove and melt it back to liquid before adding the rest of your ingredients. In order for the dry ingredients to properly dissolve, you’ll want to whisk constantly.

Once the pudding starts to bubble, immediately remove it from the stove and strain it through a fine sieve. This step is optional, but prevents any undissolved dry ingredients from sneaking in there. One important tip with homemade pudding is that you need to immediately cover the top of the surface of the pudding with plastic wrap to prevent a skin from forming on top of the pudding. 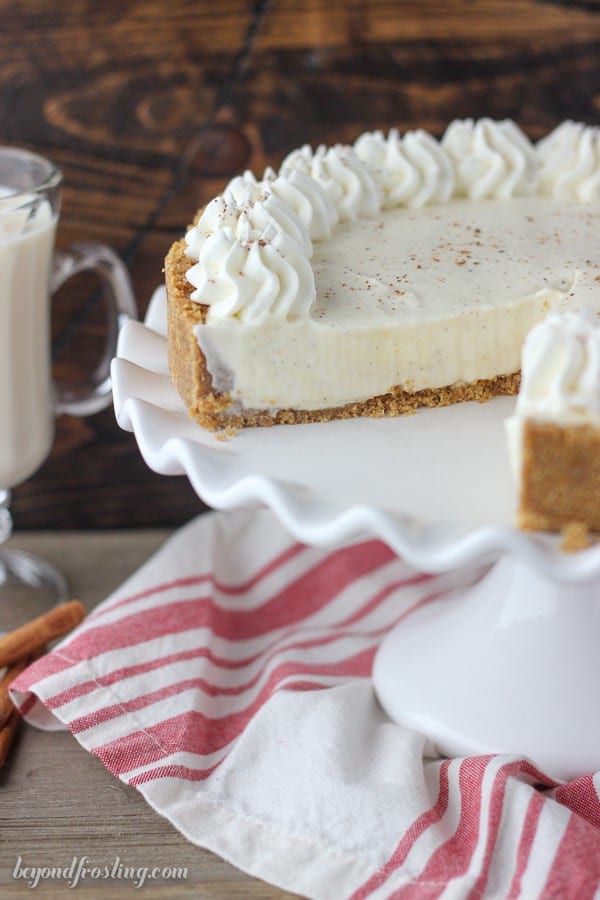 After a couple hours in the refrigerator, the pudding will be very thick, more custard-like. Give it a real good stir before adding your heavy whipping cream. This will make it easier to fold the two together. I’ve also made the whipped cream with gelatin for added stability. This results in the lightest and fluffiest filling.

I really hope you will consider trying a homemade pudding. I was intimidated at first, and sometimes I still have batches that separate occasionally.

This No-Bake pie would make a great addition to your holiday gatherings. Just be sure to check out my tips for making a no-bake crust and you’ll be all set. Grab your springform pan and let’s do this thing. 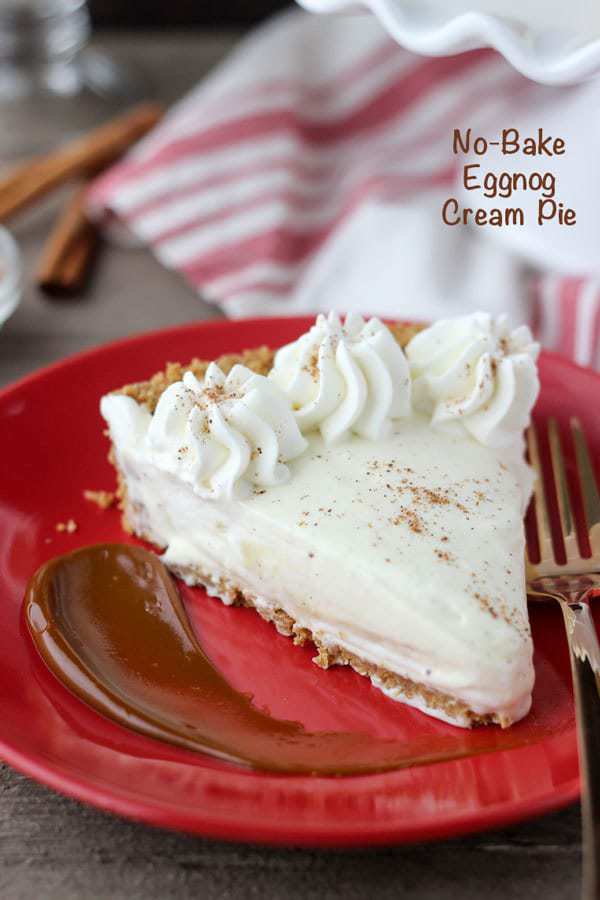 Don’t forget to watch my quick trips for making the perfect no-bake crust!

This No-Bake Eggnog Cream Pie is made with a graham cracker crust, and homemade eggnog pudding mixed with whipped cream to create a light and airy mousse like dessert. This pie is a great make-ahead of time dessert for the holidays.

Feel free to substitute gingersnap cookies for the crust. Substitute 1 teaspoons of vanilla extract for the vanilla bean. 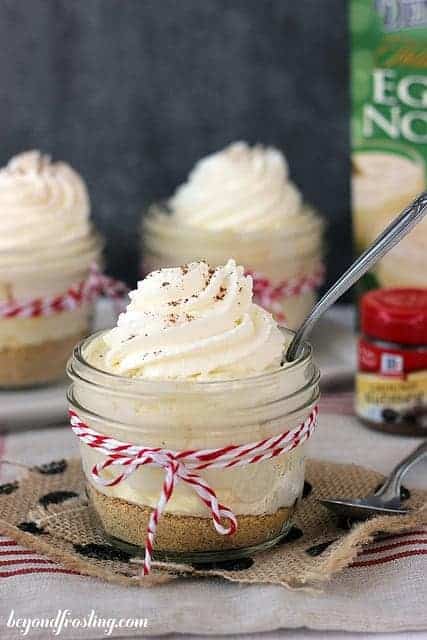 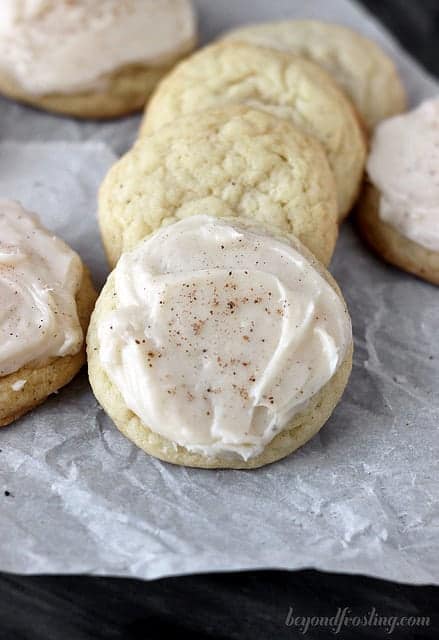 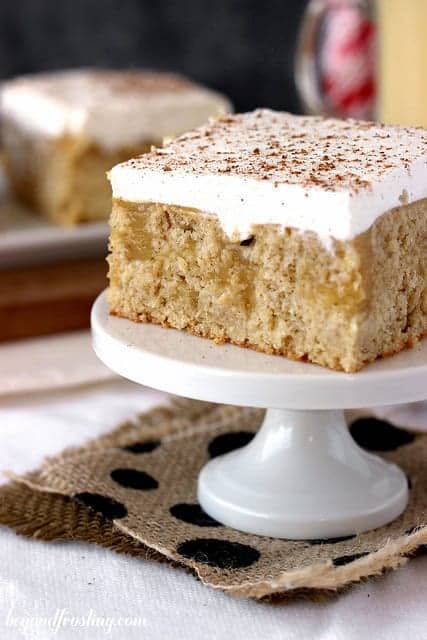