I have a very special story to share with you today. I really want to get back into my monthly mixer posts, so I figured this is a the perfect place to start.

About a month ago, my boyfriend turned into my fiancé (I still can’t believe it!) One of the first questions I always get is, “were you surprised?”

It feels weird to say “yes” because the fact is we’ve had the conversation a few times over the last year a half. But, I literally had NO idea that he was even thinking about a ring or shopping for a ring. I had no thoughts whatsoever on that snowy Saturday that he was going to propose. 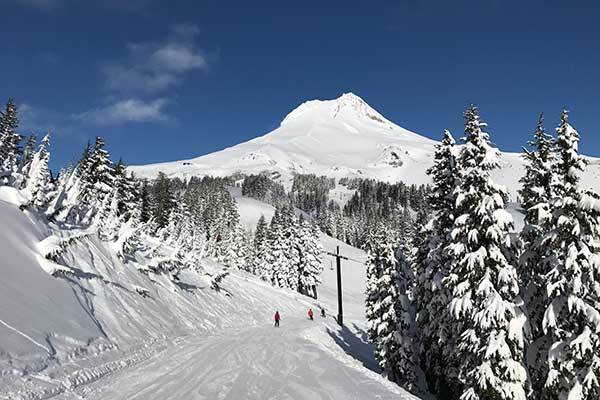 To give you a little bit of background, we’ve been together for five and half years and met at work. We worked for a very small company, only about 20-25 people at the time, and we continued to work together, very closely for the following four and half years. Our lives sort of turned upside down almost exactly 11 months ago when I accepted a job in Oregon and would relocate there. Here starts the next chapter of our relationship.

After spending literally everyday together for four and half years, we suddenly entered into this unknown world; distance. I sought advice from some friends who had gone through similar situation. The truth is, I wasn’t worried about us, I was worried how we would deal with the loneliness. I was worried how I could still be supportive through the difficult times. How long would it be before he could move here and find a job? It was a very long year of unknowns. There have been so many goodbyes and “see you soon” over the past year and I can count on one hand the number of times I didn’t cry. 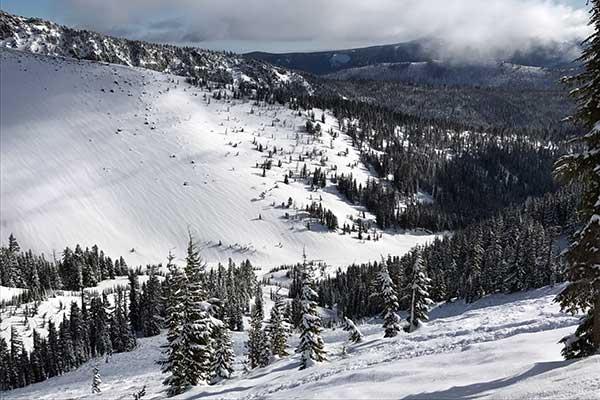 We saw each other almost every 3 weeks, and I feel very fortunate that we were able to make that work. I am happy to say that we are closing that chapter of our lives in the very near future. Yesterday was his last day at work in Southern California. The movers will be coming in 2 weeks and he will shortly follow. No more FaceTime dinners!! 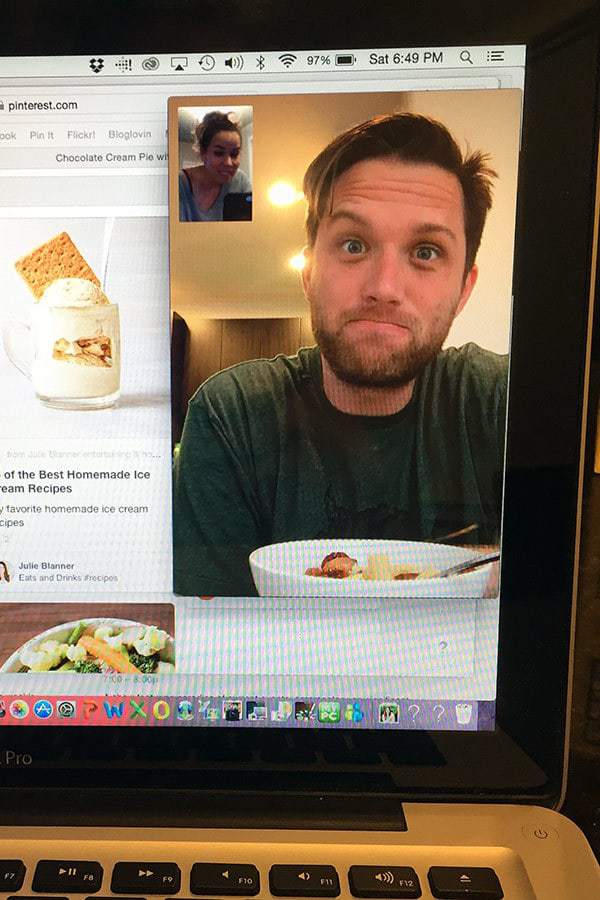 I’d be lying if I said that the first couple of months I sometimes wondered, would this be the weekend. But I finally came to reality that it wasn’t our time. In addition to the living apart, the previous year saw a lot of changes in our lives. I wrote a cookbook, which dominated my life. Right around the time I was moving, our company relocated the office to Marina Del Ray. Suddenly his 15 minute commute turned into 3 hours round trip, everyday for the past year. Talk about a huge adjustment.

I put the idea of getting engaged out of my head. He wouldn’t propose until he was living here and settled into a job, I thought. So that’s the long answer to the question, “were you surprised?” Yes. Yes I was.

On his previous visit, it was somewhat stressful, trying to figure out what we were going to do over the next couple of months with a pending move date to figure out. So on this particular weekend (February 25th) I decided to book us a hotel near the mountain so we could get out and just have fun, relax and snowboard all weekend. We needed it. We needed to get away from the stress and pressures we put on ourselves. 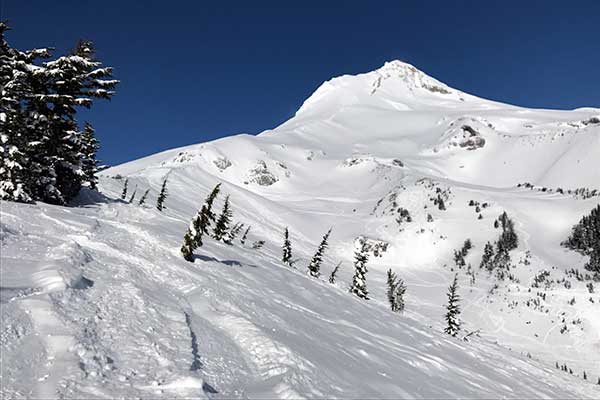 Saturday morning on the way up the mountain he was a little quiet, but nothing out of the ordinary for 6:30am. We got to the mountain and it was partly cloudy but the sky was gorgeous. It had been snowing the couple days prior so the trees were blanketed in fluffy white pillows. We had been expecting a stormy day, so it was a pleasant surprise.

We finally made our way up to the top of Mount Hood Meadows (off the Shooting Star lift for those of you who might be familiar) and decided to take a run through Twilight bowl to see how the snow was. I entered through the gate and was scoping out the spot to drop, but he said, “let’s go down a bit farther”.

He had told me on the lift that he wanted to fix his boot, which made sense because it was his first time riding in his new boots. So he unstrapped one foot, surrounded by fluffy powder. I got out my phone and was taking pictures of the gorgeous mountains. 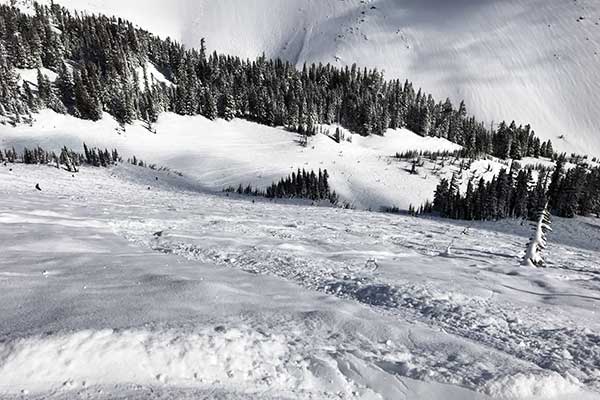 “Hey, should we ride the singles line at the bottom?” he asked.
“No, why? I don’t think we need to,” I said, with my head buried in my phone.
“Because we can’t do that anymore.”

I looked up and realized he was holding the ring. Well actually he was holding a baggie with the ring in it, because he was so afraid of dropping in the snow.

I immediately started crying, and said, “are you for real? Is this happening right now?”

And as I continued to cry with a giant cheesy grin on my face, I think I said, “Oh wait, let me get a photo!” And I took a picture of him. HAHA! 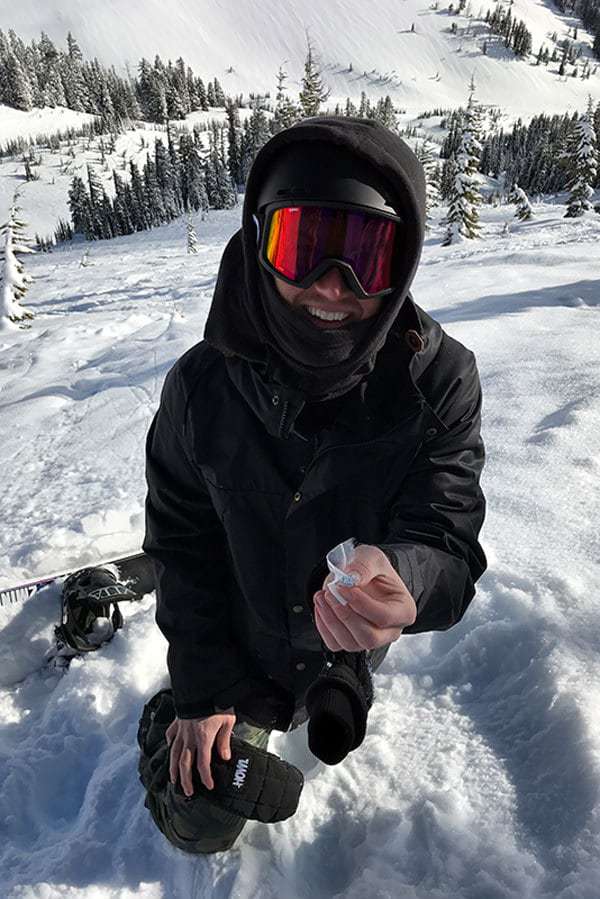 So finally he asked if I would marry him. I think you know my answer.

I unstrapped my board and we sat together and I stared at the ring in awe. It’s truly the most beautiful ring, and I could not have picked a better one myself. I would also like to give him credit for searching my Pinterest board (wink wink). 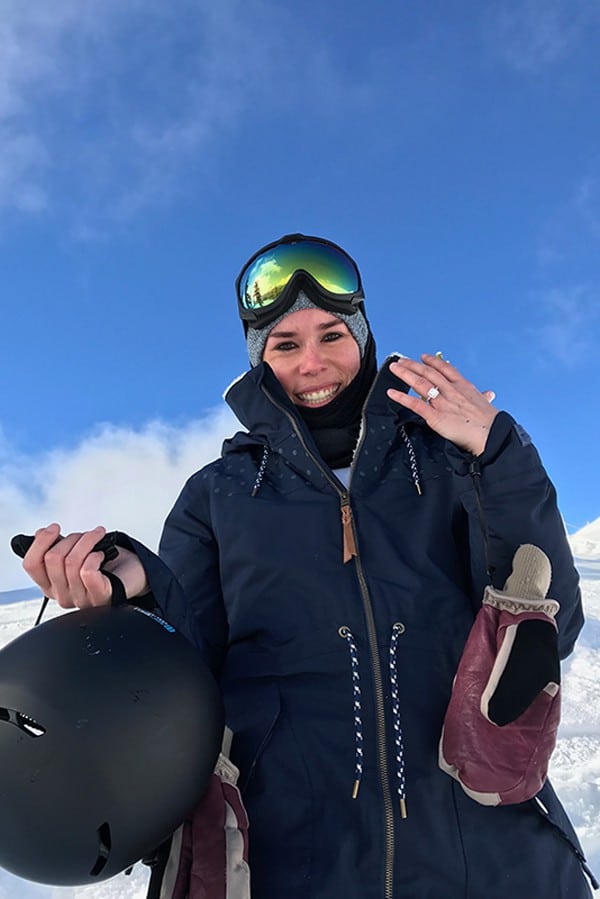 Before we left he said, “do you want to call your parents?”
“Well do they already know?” I asked.
“Yea, I called them both for permission,” he said
“Then no, I want to keep riding powder. We will call them later”
“Are you sure?”
“Yea, I’m sure!” 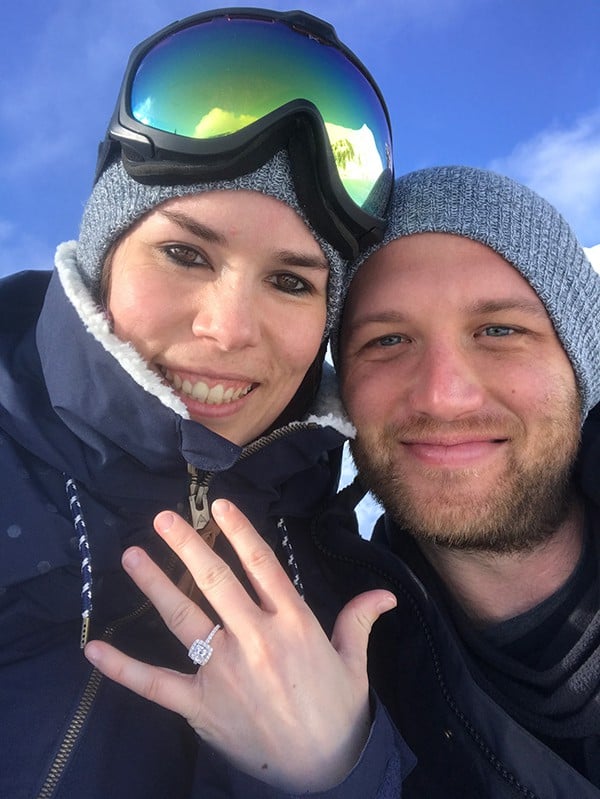 Now let me just tell you that there is no cell phone reception unless you are at main lodge, and my parents appreciate a good powder day, so I knew they would understand. I had actually texted them a photo of the mountain on the drive up because it was standing bold and bright against the blue sky. Little did I know that they were waiting for the news. 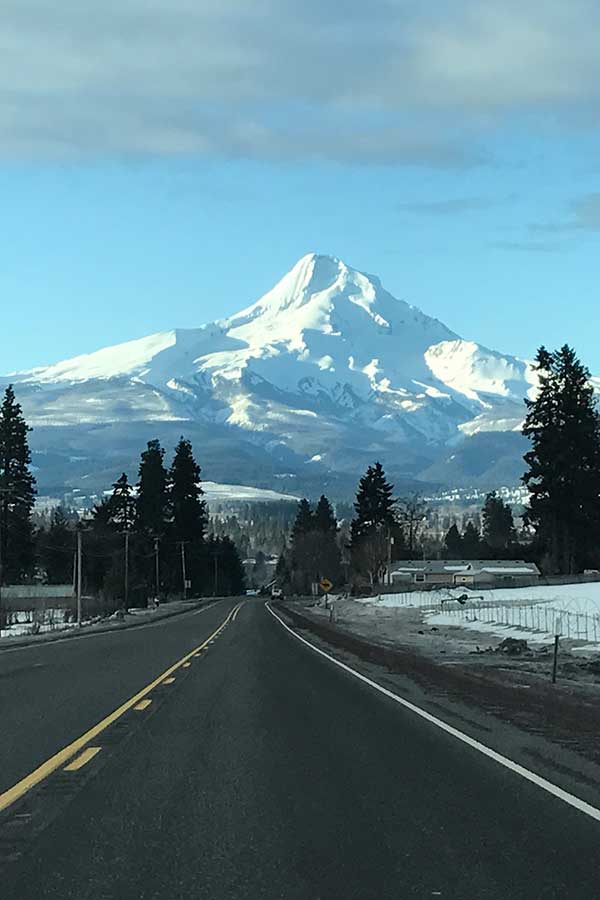 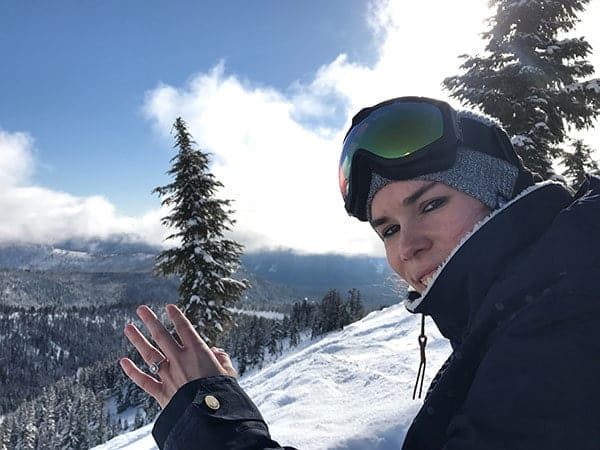 When we got on the lift, I started asking the typical questions of who knows and when did you buy it and all that jazz. He had called both of my parents, and I really enjoyed him telling me the stories of each phone call and how he got the ring. Props to my future sister-in-laws for their input and support!

So we kept riding until lunchtime, ripping turns through the woods with a giant cheesy smile on my face, and still a little happy tears in my eyes. We headed to main lodge, ordered a pizza and champagne and started to make the round of phone calls and text messages. 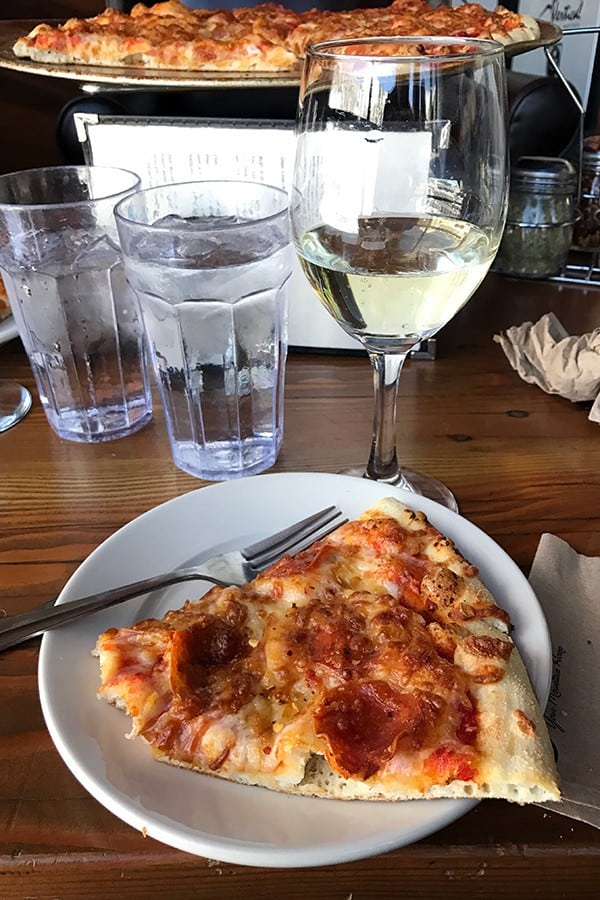 I could not have asked for a better proposal. I’ve actually always wanted a mountain proposal (yes, I am THAT cheesy!). The day was gorgeous but it was just the two of us in the wide open canyon full of fresh snow. The very first time we ever rode together, we had been dating for a couple of months, but we both secretly wondered if the other one was actually any good at snowboarding. Thank goodness that worked out! That’s the look of someone who is relieved to have it over with. 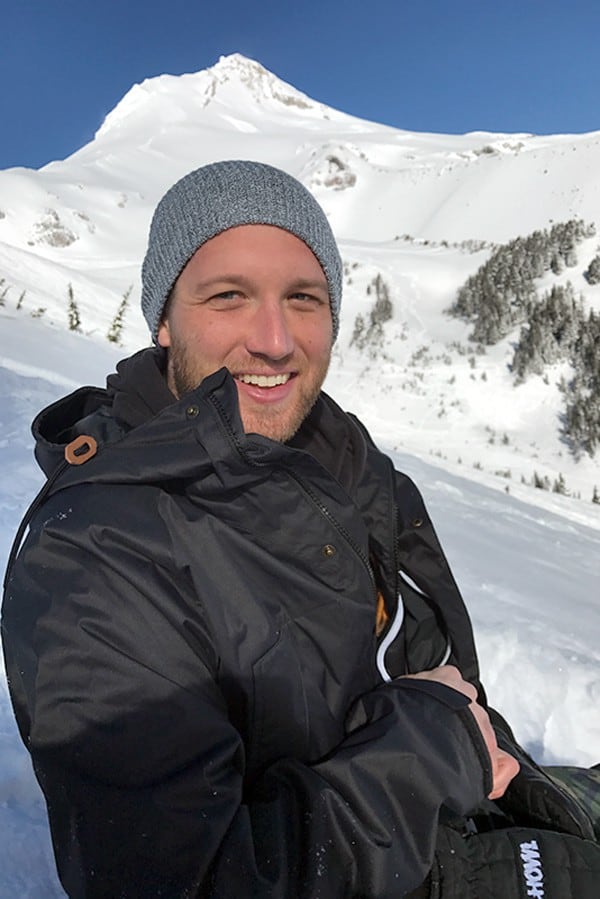 We spent the night in Hood River because I had conveniently planned for our weekend getaway, without even knowing what he had up his sleeve! We celebrated at dinner with some friends from the area and got a great day of riding in on Sunday too. Sunday was perfect and snowy with plenty of turns to be had. 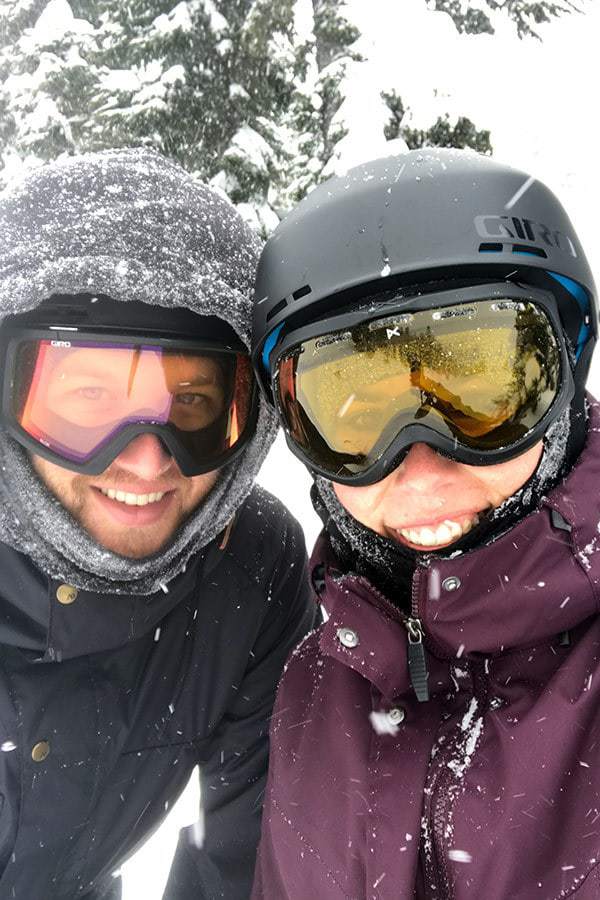 Also like 90% of the photos of us are with our helmets and goggles on.

Tuesday morning it was time to say goodbye again. Even though I was still on cloud nine from the weekend, I was sad to see him go. However I knew that we wouldn’t have to do this for too much longer. However, we still weren’t sure when things would work out.

Two weeks later we decided it was time. He put in his notice at work and we sorted out the details of when we would move. I am SO excited you guys. We are more than ready for this to be over. 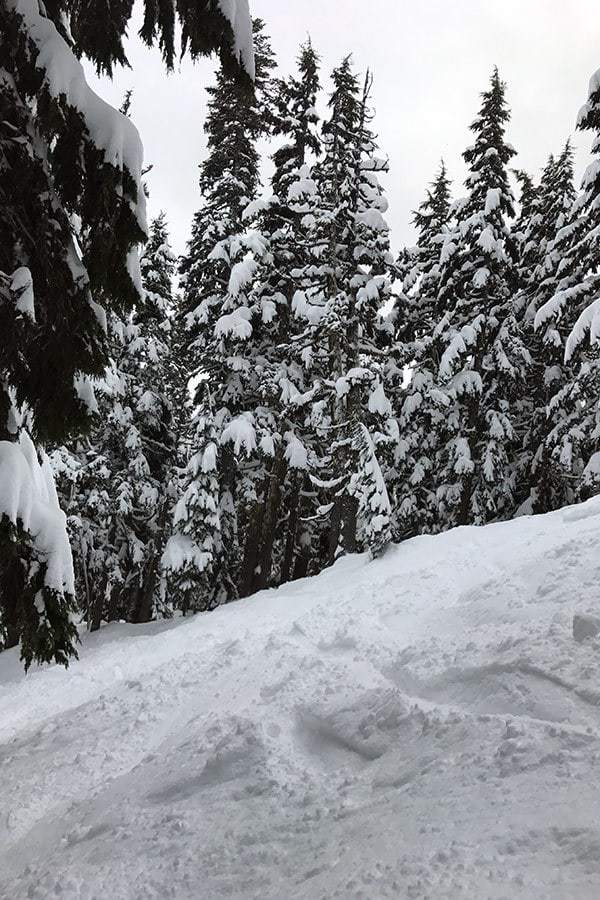 A few people have asked about wedding plans, but we are just focused on the move right now, so more details to come I am sure. I will tell you that we think we want a winter wedding if the timing works out and it will be in 2018. That’s all I can give you! Thank you for allowing me to share my story, so now I will always have it here to remember every little detail. 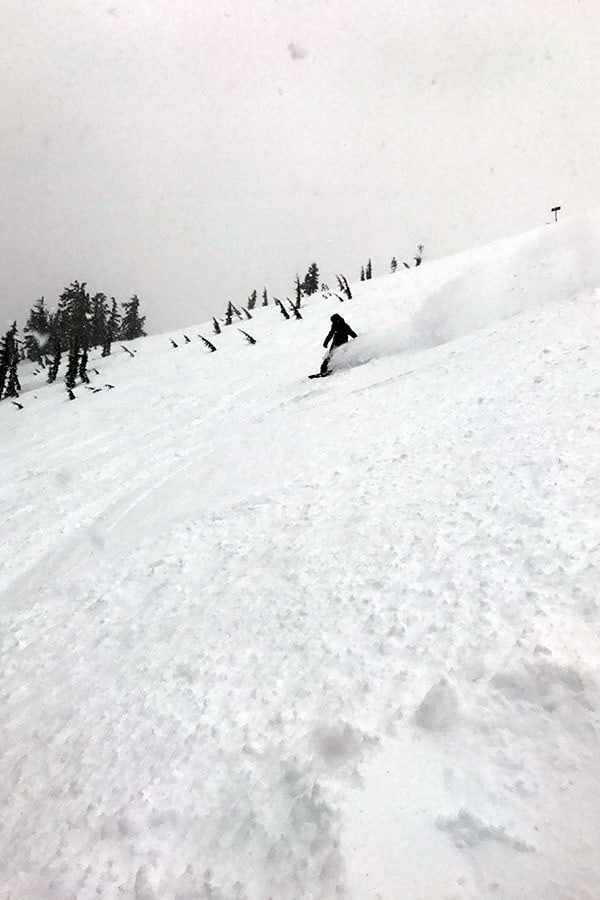