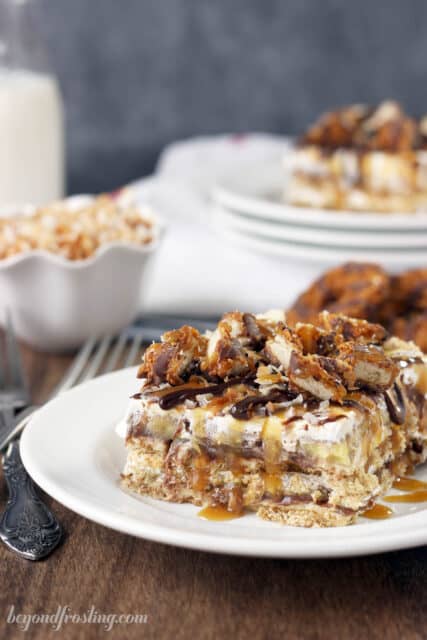 Some things are just meant to be, especially when it comes to dessert. Things like this Samoa Icebox Cake are definitely meant to be. Layers of graham cracker, caramel cream cheese, coconut pudding and chocolate fudge are just a few reasons why this icebox cake will knock your socks off.

I originally set out to make a samoa lasagna, but decided on an icebox cake instead. They are quite similar, but there are less layers in the icebox cake and a little less of the filling. This Samoa Icebox Cake is next level delicious.

When is comes to icebox cakes, you can pretty much customize it any way you want. You could use shortbread cookies instead of graham crackers, or maybe even Brownie Brittle for some added chocolate.

The ingredients in this icebox cake are very similar to those used in my Sinful Samoa Cake that I shared on Monday. Be sure not to miss that!

It’s take a bit of finesse to build the layers. Start by lining the bottom of your pan with parchment paper or tin foil. This just helps to keep everything in tacked when serving, since the bottom layer of crackers won’t stick to the pan.

Then you layer on some fudge sauce. I typically use a jar of Hershey’s Hot Fudge sauce that you would find next to the ice cream. It is very soft, and thus, very easy to spread. You don’t even really need to heat it up. Use an offset spatula to spread it over the graham crackers. You will need to get your fingers in there and hold down some of the crackers initially, but this is the “glue” that holds them together, so once that layer is on there, it will be easy to build the rest.

Then spread on the caramel cream cheese. Since you will have tow layers, you will want to divide the cream cheese in half. On top of the cream cheese, I put half the batch of coconut pudding. Sometimes I buy coconut pudding at Walmart, but if I can’t find it, then I just make my own. You can simply use a package of vanilla pudding and add some coconut extract. It is delightful. On top of that I sprinkle some toasted coconut and repeat from the beginning.

Of course you will want to top off your final layer with Cool Whip and lots of caramel and chocolate drizzle. I happened to have a few leftover Samoa cookies that I cut up and put on top. I know it’s difficult to have “leftover” samosa, but this is my trick to avoid eating them all.

The best thing about icebox cakes is that they can be made ahead of time. The graham crackers will soften but it’s actually preferable! That way the texture of the cake is consistent and all the layers hold together.

This recipe is mostly a no-bake recipe, except if you want the toasted coconut. This step is really easy. Turn on your oven to 400° F and spread the coconut on a baking sheet. I find it best to line the sheet with parchment paper or a silicone baking mat. You just have to bake it until the coconut turns a light brown and then remove from the oven and let it cool. I wish stores would start selling toasted coconut, that would be amazing!

This samoa cake will be an awesome recipe to have on hand for those summer months when the temperatures rise and you are looking for a treat to cool you down.

Please watch coconut carefully- baking (toasting) times will always vary depending on the quality and moisture in the coconut.