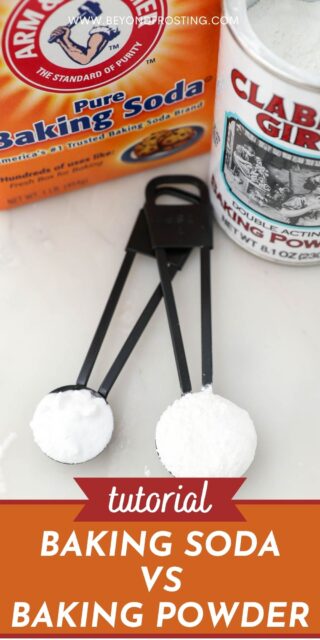 You probably know that baking soda and baking powder both contribute to the rise of baked goods, but it’s important to understand how they’re different from one another. This comprehensive guide will teach you everything you need to know about Baking Soda vs Baking Powder!

Every baked good that’s meant to rise in the oven requires a leavening agent to produce that fluffy texture you know and love. The most confusing thing about leavening agents can be summed up in one age-old question – what is the difference between baking soda and baking powder?

Well, that’s exactly the mystery we’re going to solve today. Buckle in and get ready for a good old-fashioned chemistry lesson.

How Do Leavening Agents Work?

Leavening agents like baking soda and baking powder work by releasing carbon dioxide – the same gas that humans exhale when they breathe. This carbon dioxide bubbles up inside of cookies, cakes and brownies, creating lift and rise during the baking process. Not only does the chemical reaction make for fluffy baked goods, but it also creates tenderness in the process.

If you’ve ever had a baked good come out flat, there was likely an issue regarding the leavening agent. Perhaps you used baking powder instead of baking soda, or perhaps the recipe called for the wrong amount of either one. It is even possible your leavening agent has expired. Let’s discuss both of these kitchen staples in detail so that you never run into such an issue again.

What is Baking Soda?

Scientifically known as sodium bicarbonate, baking soda is a basic compound that requires an acidic element to release carbon dioxide and create rise. Any acidic ingredient will trigger this reaction, from applesauce to buttermilk to brown sugar. The right ratio of baking soda to acid will not alter the flavor of your baked good – only the texture.

With the wrong ratio (or with no acid present), your baked good would develop an undesirable metallic aftertaste. To prevent this, you must have enough acidity in your batter or dough to fully activate the baking soda.

When to Use it

Since baking soda requires an acid to make it work, you should never use it in a recipe with no acidic ingredients. If you did, it would only add that metallic aftertaste mentioned above. Here are some additional ingredients that will react with baking soda:

What is Baking Powder?

The first rise occurs when the baking powder is exposed to moisture (i.e. when it’s combined with wet ingredients). After that initial rise, baking soda gets a second wind during the baking process.

When to Use it

Even though there’s baking soda in baking powder, the two leavening agents are typically used in opposite scenarios. If you’re baking something that doesn’t call for an acidic ingredient, baking powder is the way to go. You won’t be left with any aftertaste since it contains its own acid to begin with.

However, you can still use baking powder in recipes that call for an additional acid. For example, if you’re making red velvet cupcakes, you want that touch of tang from the buttermilk and/or vinegar. So you wouldn’t want to cancel out all of the acidity with the corresponding ratio of baking soda. In that case, baking powder is a good choice even though the batter will contain a separate acid.

What About Aluminum-Free Baking Powder?

Why Do Some Recipes Call For Both?

There are plenty of recipes that use both baking soda and baking powder. Let’s refer back to the previous example of my red velvet cupcake.

If you clicked on the recipe, you may have noticed that it calls for both leavening agents. Further examination of the ingredients will reveal that there are 3 different acids used in the cake batter – vinegar, natural cocoa powder and buttermilk. Baking soda helps to balance out all of that acid without getting rid of the intended tanginess.

Since baking powder includes its own acid, it’s often added to recipes that call for baking soda to provide some extra tang. Some baked goods could simply use the extra lifting power. It really depends on what you’re making and what the intended result is.

Can I Substitute One For the Other?

All of my recipes have undergone extensive testing, so there’s no need to try substituting baking soda for baking powder or vice versa. Messing around with leavening agents requires a lot of trial and error that not everyone is looking to take on in their daily life. It’s best to keep your kitchen stocked with both baking soda and baking powder so that you’re prepared for any recipe that piques your interest.

Do Leavening Agents Have a Shelf Life?

Just like any other ingredient, leavening agents indeed have a shelf life. I like to replace my baking soda and baking powder every 3 months or so.

Not sure how long you’ve had your leavening agents for? You can easily determine their effectiveness with these simple tests:

More Tips & Tricks to Guide You in the Kitchen

There you have it! I hope you liked learning about baking soda vs baking powder. Be sure to click the links below if you’re interested in more helpful cooking and baking advice.