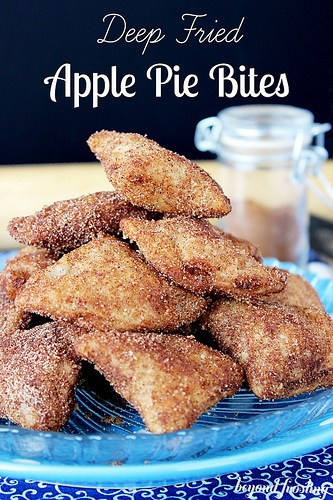 These Easy Cinnamon Apple Pie Fritters have a crispy cinnamon sugar coating on the outside and are stuffed with a gooey apple pie filling.

As September gets closer, I get more and more excited for fall. Beyond apples, changing leaves and cooler weather, it is also really the start of snowboard season. In September there are video premieres, new products start shipping and  pre-season contests are in full swing.

What does that have to do with desserts? Absolutely nothing, except that I have multiple reasons to look forward to September that aren’t just dessert related. Fall is my favorite season, although fall on the west coast is so different from the east coast. But one thing is the same; fall means apple season.

I recently heard about a contest hosted by one of my favorite bloggers, Ashton from Something Swanky. She teamed up with Lucky Leaf for recipe contest featuring their pie filling. I love pie, and I love small sized desserts, so I decided to create bite-sized Deep Fried Apple Pies. These mini “dumplings” are a pie crust, filled with apple pie filling, deep fried and rolled in cinnamon sugar. Oh my gosh are these delicious.

They are packed with some of my favorite flavors including maple and cinnamon. I always add a little maple syrup to my recipes. I used a deep fryer to make these, but you can easily cook these on the stove. This recipe is so easy because you can use prepared pie crust and Lucky Leaf’s apple pie filling.

These Deep Fried Apple Pie bites are best served warm with vanilla ice cream and or whipped cream.  Eat them with a spoon or with your fingers. I recommend eating them soon after frying. If you don’t need as many bites, you can use only one of pie crusts instead of two for this recipe. These are so crazy addicting.

These bites have a crispy cinnamon sugar coating on the outside with gooey apple pie filling in the center.