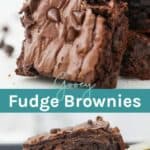 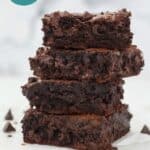 These gooey Homemade Brownies are better than any boxed brownies you’ll ever make. The middle is dense, rich and fudgy with a flakey layer on top. If you’ve never made brownies from scratch, this easy brownies recipe is the perfect place to start! 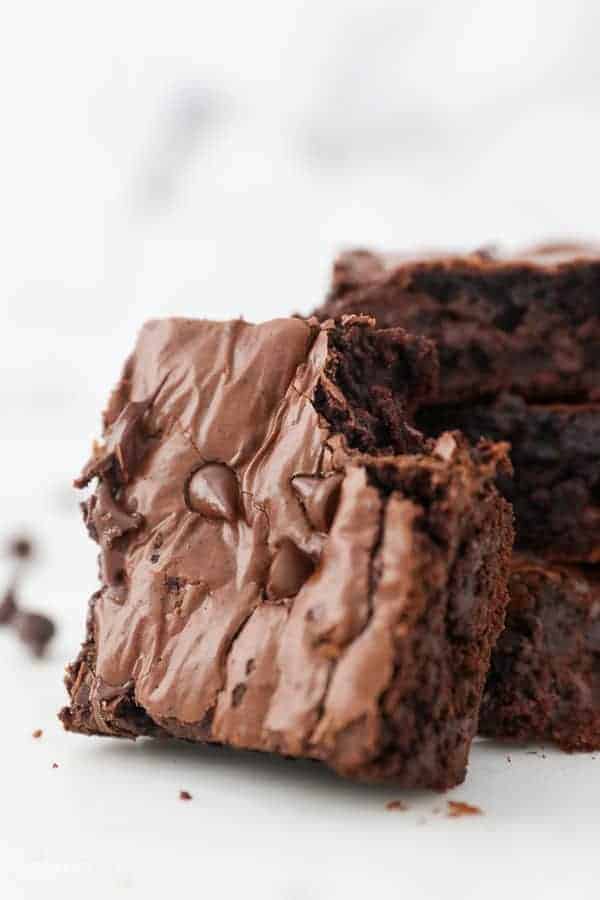 You guuuuuuys- oh my gosh!!! The time has come.

I’ve been teasing you on Instagram for maybe a month or more with all the recipe testing I’ve been doing to make the perfect, fudgy, from-scratch brownie recipe. I’ve poured my heart and soul into perfecting this recipe.

Needless to say, I have a lot to share.

Around batch 15, I lost count of how many variations or tests we’ve done to get here. If you’re interested in the process, you can read about the recipe testing below. 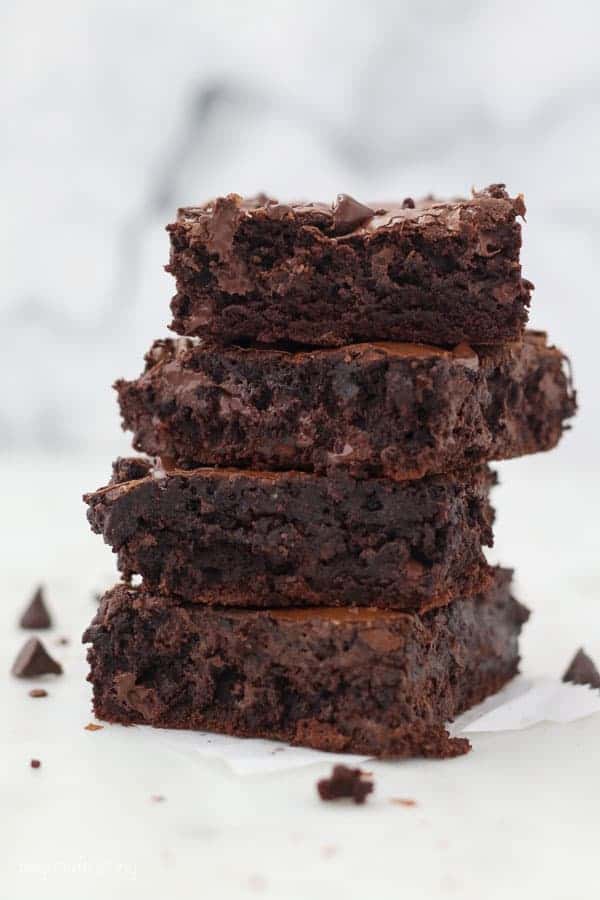 I’ve broken down the 3 crucial components to this recipe, it’s TRIPLE the chocolate: melted chocolate in the batter, plenty of cocoa powder and chocolate chips to finish it off.

My sister-in-law described them as having a super-smooth texture and very rich. She told me “they’re perfect for a brownie sundae”. I couldn’t agree more, but literally dozens and dozens of brownies were also enjoyed without ice cream. 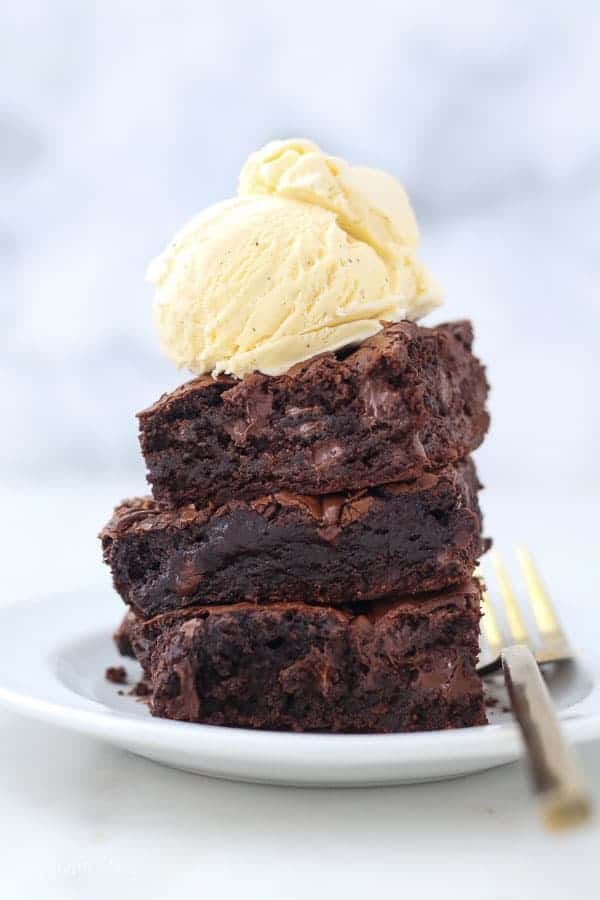 There’re a couple super important steps to making this recipe. Each of them are simple and straightforward, but it’s important that you follow the directions and don’t take shortcuts.

Okay I can’t wait any longer, let’s get into in.

The recipe testing actually started months ago. I knew I wanted to develop a brownie recipe for my blog, but first we had to define our perfect brownie.

Are you team fudgy or cakey? Edges or middle? Chocolate chips or no chocolate chips. One person even told their perfect brownie had to be less than 1-inch in height. No, I’m not joking.

We first made several popular recipes you’ll find on Google, along with boxed brownie mix. Then I set out to start testing our recipe.

I started with 4 variations of this recipe, with 2 of them being the clear winners. Then I had to compare them to our favorite boxed brownie mix (ahem, Ghirardelli). I enlisted the help of my husband and sister-in-law. 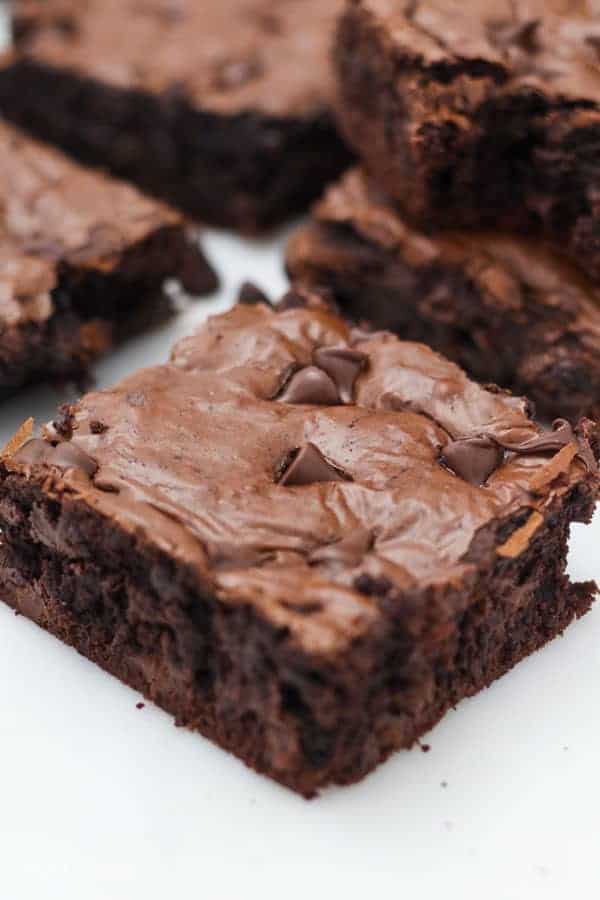 This presented a problem because although we loved our homemade version, there was something nostalgic and distinct about the boxed mix that we just weren’t willing to give up. The other factor we were looking at is achieving the look of the boxed brownie mix with the flakey layer on top.

Once we narrowed it down to the final version, I had to test all the different variations of cocoa powder, chocolate, substations for butter, different pan sizes, etc.

All of this to say that I wanted to be sure that you’ll be successful.

What I Love Most About These Homemade Brownies

after lots of research and recipe testing, this surface texture is the result of beating the eggs for an extended period of time. Be sure not to skip this step. It incorporates air into the batter and it’s actually a meringue layer that forms on top.

There is a specific (and easy) way to prepare this recipe to achieve this effect. First the butter and sugar are well-creamed together then the eggs are added and beaten for an extended period of time. 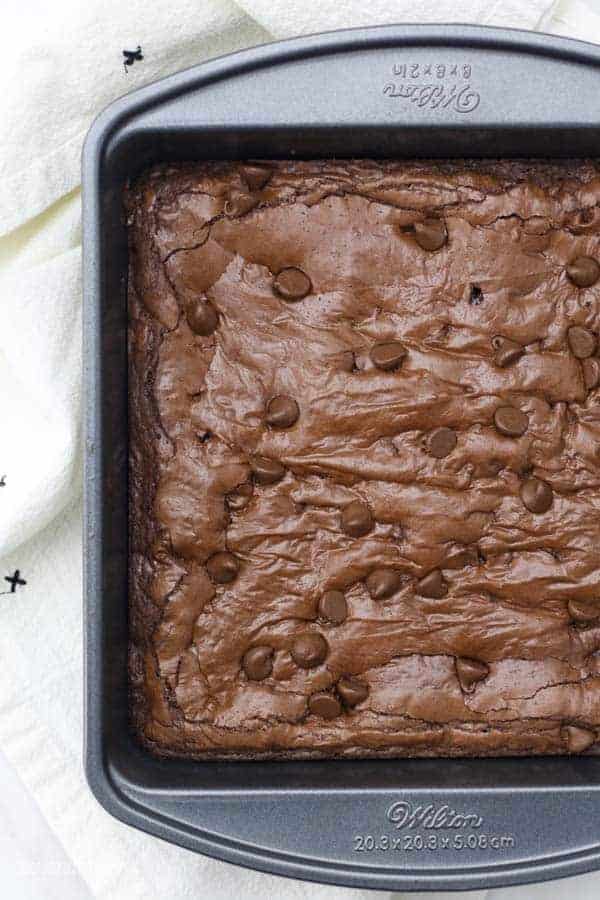 Brownies are usually either fudgy and dense or light and cakey. I believe I’ve achieved the perfect balance of both worlds. A touch of baking powder to provide a little bit of lift needed to get the texture you’re used to seeing in a boxed brownie mix.

It’s true, most brownie recipes actually don’t include a leavening agent. However, I found this was a real game-changer in achieving the type of texture you’ll find in a boxed brownie mix while maintaining the fudgy centers.

Triple Chocolate (Aka the Gooey, Fudgy and Dense Centers)

Don’t overbake the brownies! Your toothpick will still be gooey but not too “wet”. There’s also THREE different ways we’re incorporating chocolate into this recipe. A combination of melted chocolate and cocoa powder produce a rich and dense texture, and added chocolate chip give you the gooey finish. 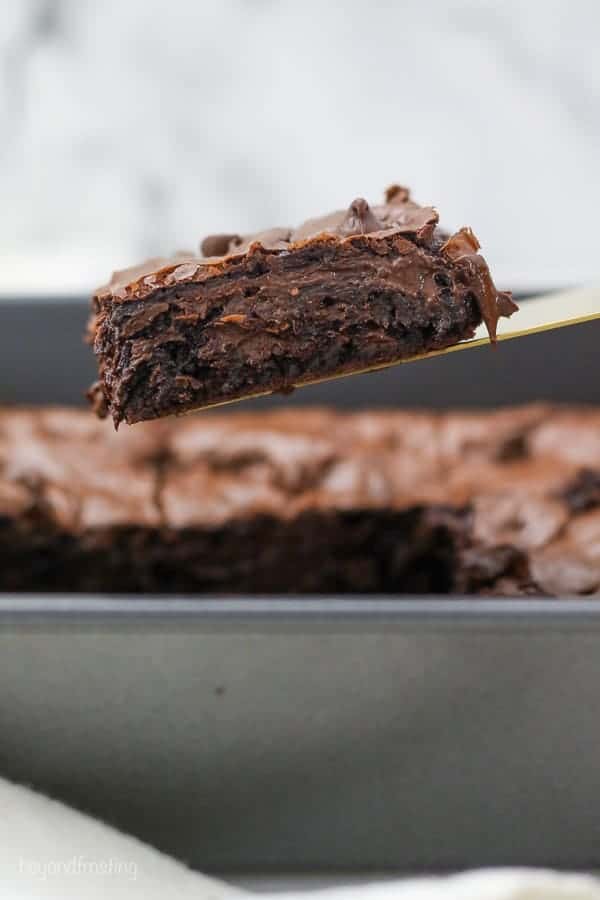 3 Key Ingredients for the Best Brownies from Scratch

One: Cocoa Powder, the “secret” to the best & richest flavors

As I previously mentioned, lots and lots of recipe testing was done to get the best results, including testing three different cocoa powders.

I’m proud to say I’ve created a cocoa powder snob in my husband.

This recipe was tested with three different cocoa powders:

Hands down, the winner every time was Rodelle cocoa powder. I don’t always bake with a Dutch process cocoa powder, but it has the smoothest, richest flavor of the three. It also happens to have some of the highest levels of cocoa butter on the market. 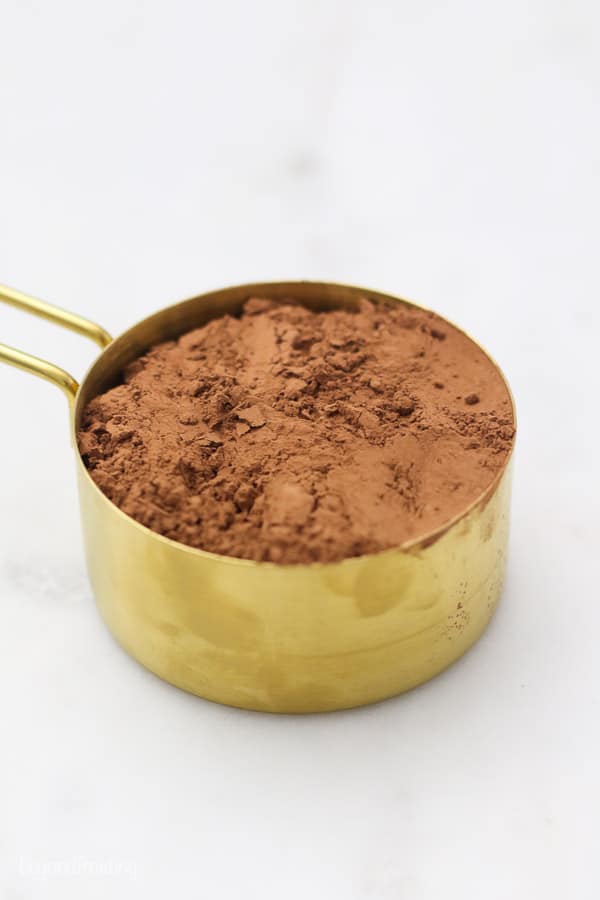 However, this recipe will work with any cocoa powder.

It’s really the combination of the cocoa powder and chocolate that gives this recipe its edge. They go hand-in-hand in how the final results are achieved.

Two: Melted Chocolate, the secret to the fudgy & dense texture

This recipe calls for 4 ounces of melted chocolate that gets mixed right into the brownie batter. If I’ve learned anything through the years of baking, it’s that the chocolate matters!

Personally, I love dark chocolate, it has the deepest and richest flavor. When a recipe calls for melted chocolate, it’s really important that you buy high quality ingredients. Your standard Hersey’s bar doesn’t cut it for me, sorry. 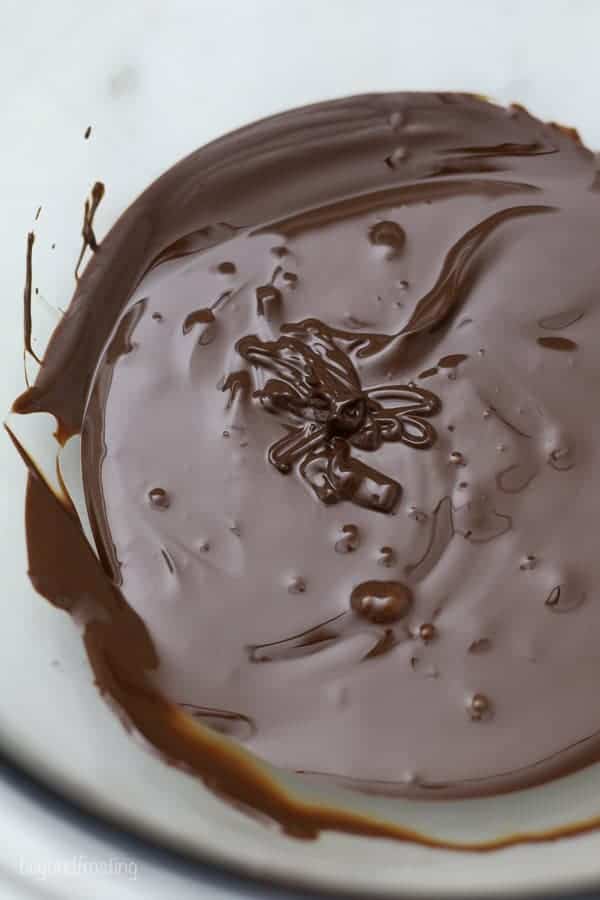 These brownies are just better when you finish them off with chocolate chips or chopped chocolate that’s been folded in the batter at the end. Out of the oven they’re melty, gooey, lick-your-fingers good. Once they have time to set and cool, they offer texture and exploding pockets of chocolate.

Now that I’ve given you the 3 secret weapons to make the best brownies ever, let me give you a quick breakdown of how the combination of these three components can affect the taste. 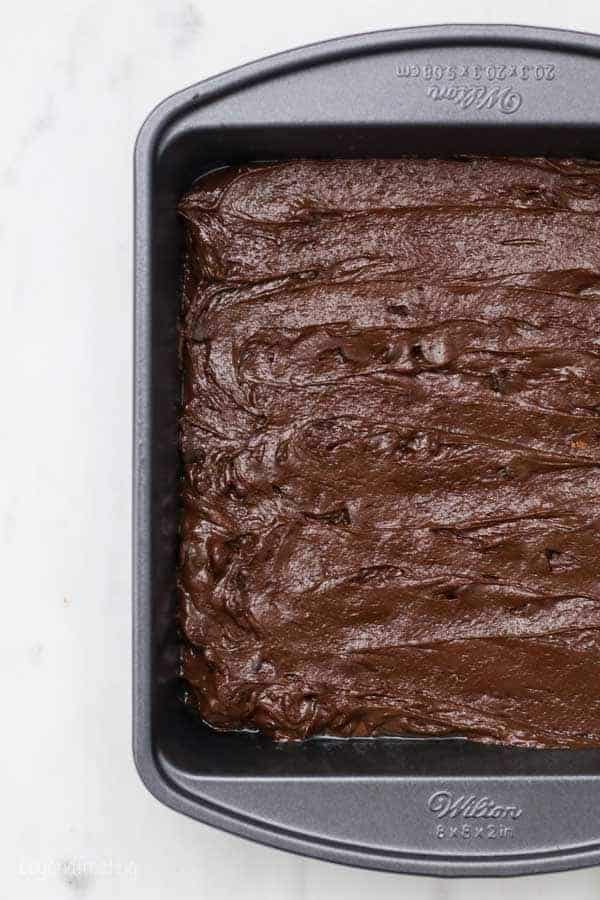 Tips for the Best Brownies 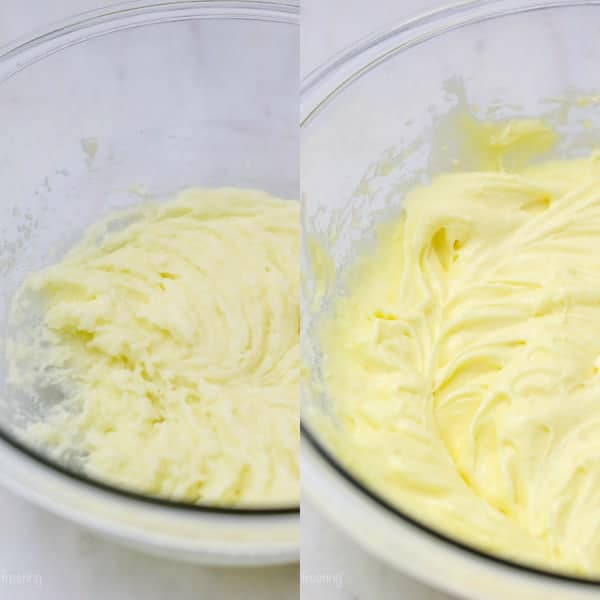 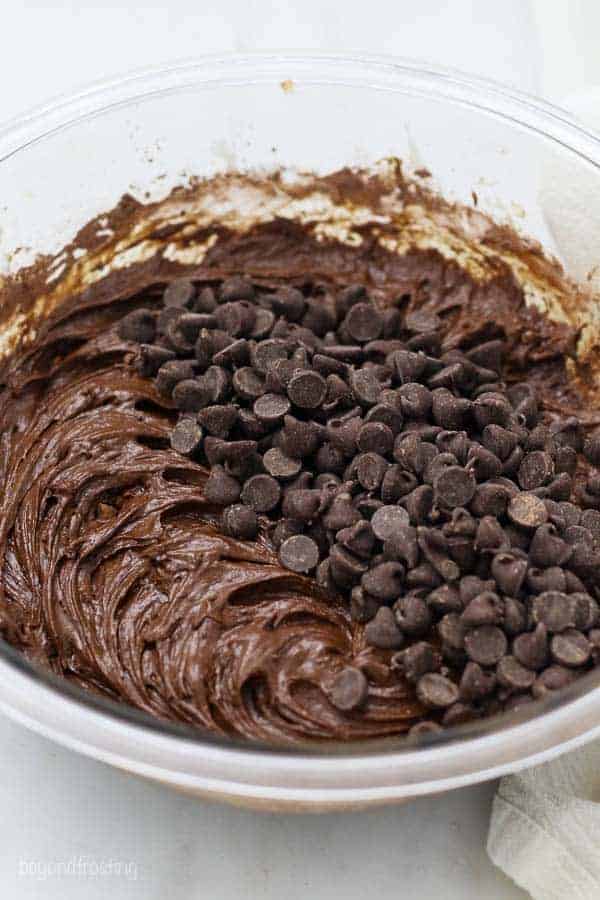 There’re lots of ways you can make these brownies to personalize and suit your own unique taste:

Please be sure to see the notes in the recipe for the different types of baking pans and different size pans you can use to make this recipe. 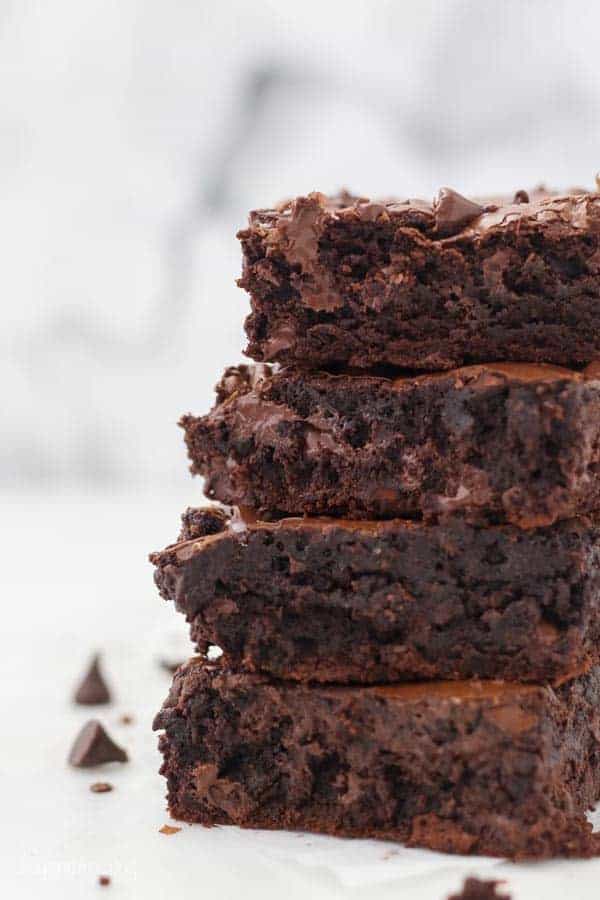 I sincerely hope that you’ll make these, as I know you’ll fall in love with them the same way I have. Now that I’ve perfected what I like to call the BEST brownies using my from scratch recipe, I don’t think I’ll ever make a boxed brownie again. 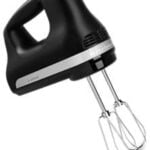 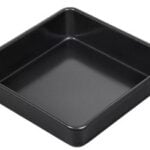 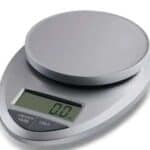