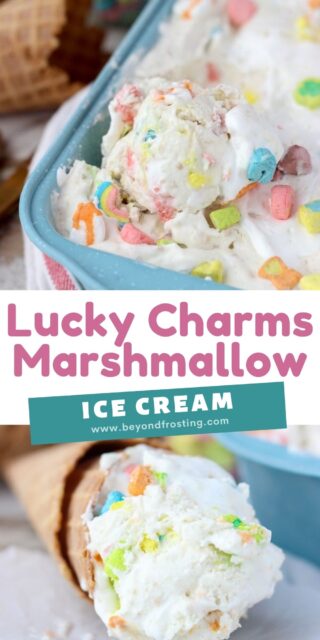 This Lucky Charms Marshmallow Ice Cream recipe is a cereal milk flavored homemade vanilla ice cream that is layered with marshmallow fluff and Lucky Charms marshmallows. It’s a gooey, sweet and an all together magical dessert!

If you love making homemade ice cream as much as I do, be sure to also try this No-Churn Fudgy Brownie Batter Ice Cream and my No-Churn Cake Batter Cookie Dough Ice Cream. 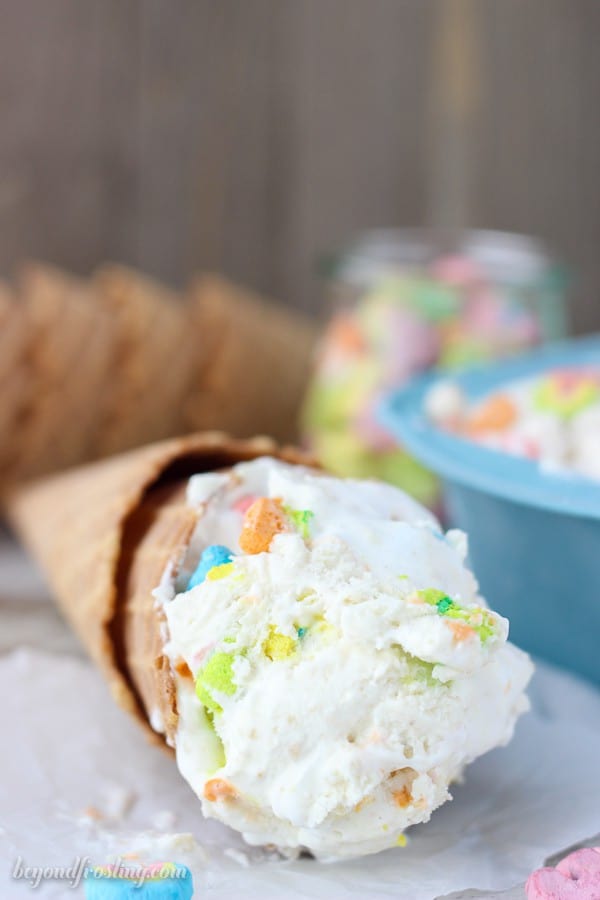 If you follow me on Instagram, you might have seen that I spent my time separating my box of Lucky Charms into marshmallows and cereal. What I noticed is that the ratio of cereal to marshmallow needs some serious attention. Although I don’t mind the cereal without the marshmallow, when I pour a cup of Lucky Charms I expect to get some nice colorful charms in my cereal. When I actually separated them out, I was shocked at how few marshmallows there were! Thankfully there was plenty for this ice cream. 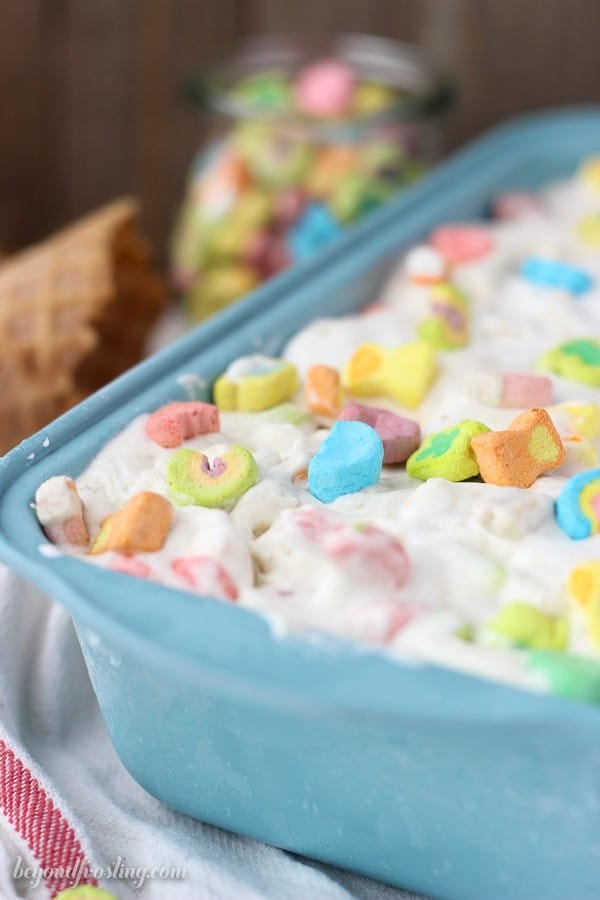 Can I tell you that I prefer to eat my cereal from a coffee mug instead of a bowl? I don’t like to have to dig around my bowl to find my cereal and I prefer a small amount of milk to my cereal, so a coffee mug is perfect!

Where Can I Buy Lucky Charms Marshmallows?

Oh! I almost forgot to tell you that you can also buy dehydrated marshmallows and skip the cereal all together. You can get a 1lb bag from nuts.com or if you’re super aggressive they have them in bulk. Don’t worry you only need one box of cereal for this recipe. 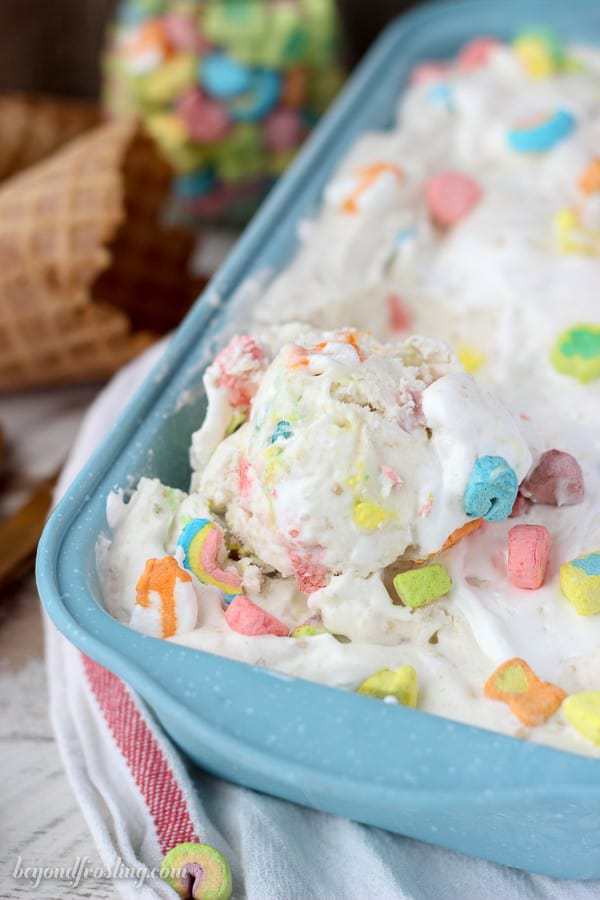 This Cereal Milk Ice Cream Is Bursting With Marshmallow Flavor

I recently learned that one of Salt and Straw’s monthly flavors is called Pot of Gold and Rainbows, which is their version of a cereal milk ice cream loaded with Lucky Charms marshmallows. So I did what any normal human being does and got my hands on a pint of ice cream for product testing purposes.

My version of this ice cream is slightly different in that it’s also loaded with a lot of marshmallow fluff.

You know it’s a special occasion when I bust out my actual ice cream maker. The base of the ice cream is a basic cereal milk flavored vanilla ice cream (part heavy cream and part whole milk). It’s layered with the marshmallow fluff and Lucky Charms marshmallows. 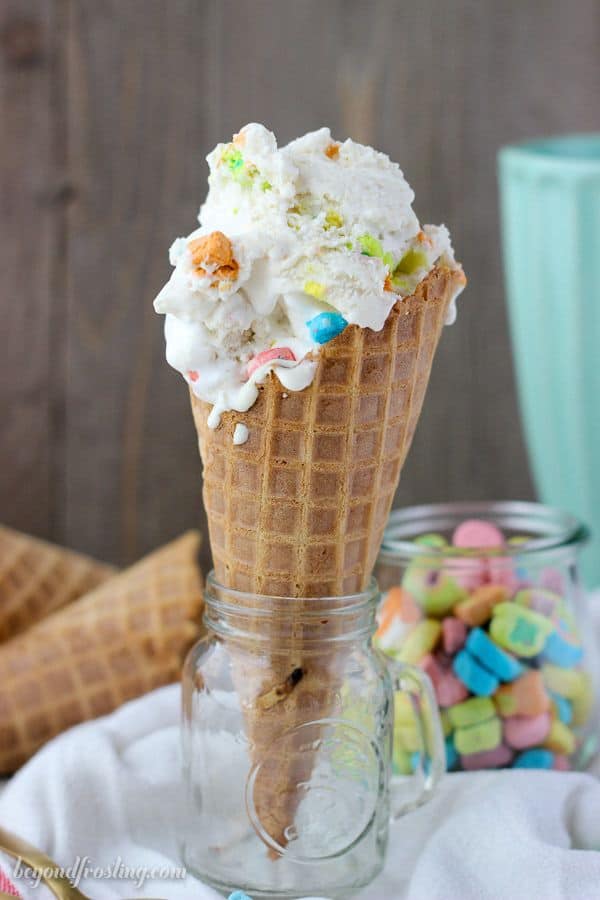 The marshmallow fluff doesn’t freeze all the way which is actually kind of nice because it helps keep the ice cream soft! This is the same ice cream base I used in my Peanut Butter Cup S’mores Ice Cream. It’s a recipe that has been adapted from Simply Scratch.

To prepare the ice cream base, I heated the milk on the stove-top together with some sugar until it’s dissolved. Then the milk needs to be cooled and refrigerated until it’s completely cold again. 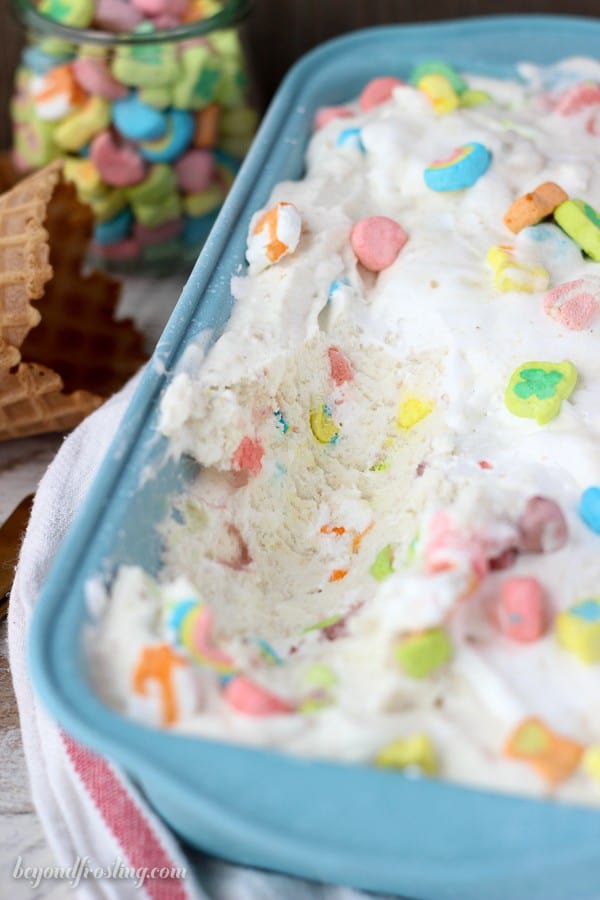 While it’s cooling down in the fridge, I added some cereal that I pulsed in my food processor. The cereal doesn’t dissolve, but it adds a nice flavor to base for the ice cream. I did use my strainer when I pour the ice cream based into the mixer to filter out the large cereal that did not get absorbed.

I am beyond excited to share this recipe which I made just a few days ago because it is SO so good, and it happens to be St Patrick’s Day on Friday. I’ve already got my pot of gold at the end of the rainbow (looking at you babe!), but this ice cream can also be my pot of gold. I am totally okay with that. 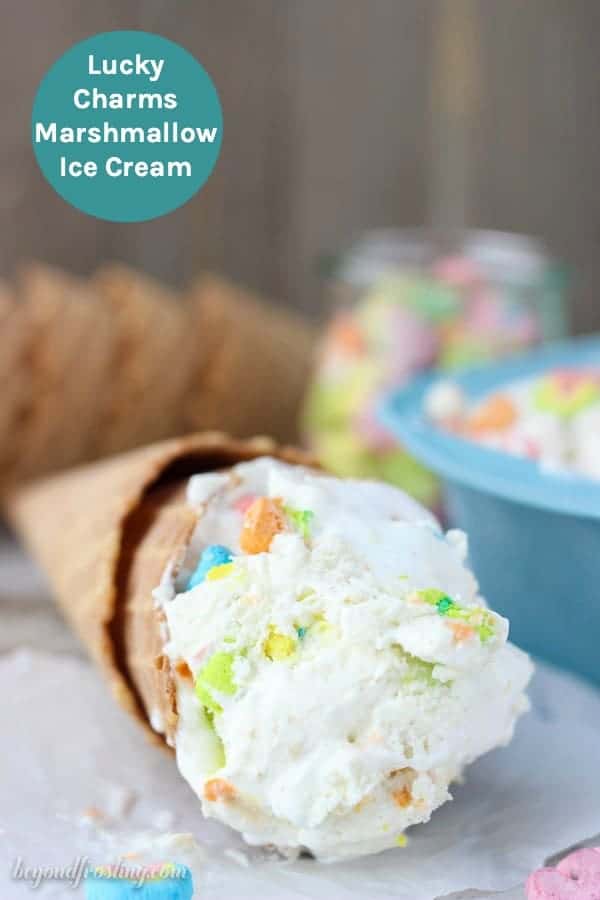 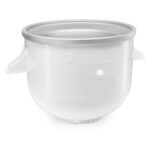 – For this recipe I purchased a 13oz jar of marshmallow creme and used about 3/4 of the jar for this recipe. You can add as much or as little as you would like
– Be sure to allow for enough preparation time to freeze your ice cream maker and another 4-6 hours for your ice cream to completely freeze.
– If you prefer not to use whole milk and heavy cream, I suggest using all heavy cream.