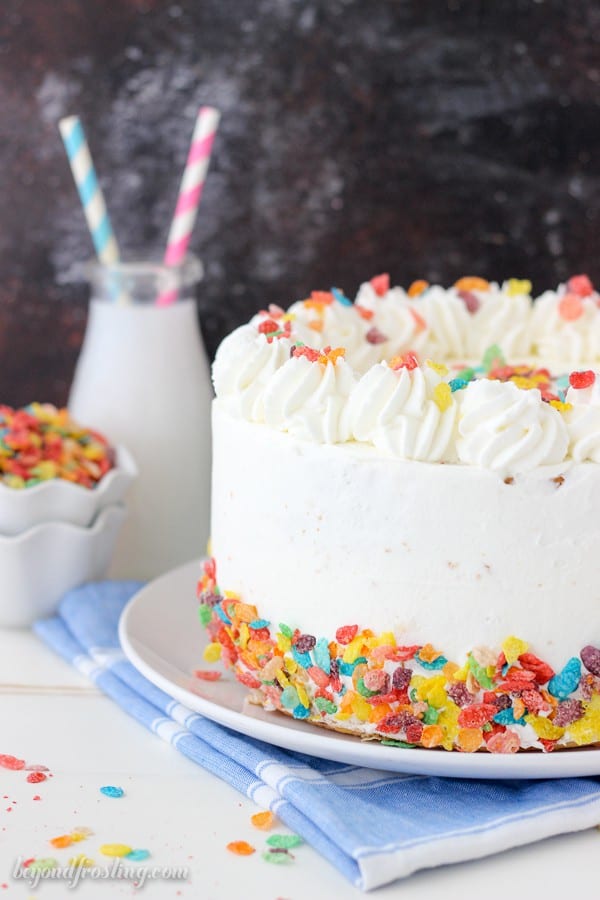 Can you all believe that I am going to be on national TV tonight? Can someone pinch me yet? I hope you all aren’t sick of hearing about my cookbook, because there’s going to be a bit of that going on for the next month and we countdown the final 30 days until the official release! Don’t forget to tune in tonight, June 22nd at 8pm EST/ 5pm PST. I’ll be appearing on QVC LIVE on the segment called “In the Kitchen with David”. I think my airing will be sometime within the first hour of his two hour segment. Yesterday I shared the first photo of my cookbook (and a shameless selfie) on Instagram. Tonight you guys are going to see 12 recipes from the book! I hardly slept last night, I am way too excited and nervous! I probably won’t eat all day. Ah, who am I kidding? 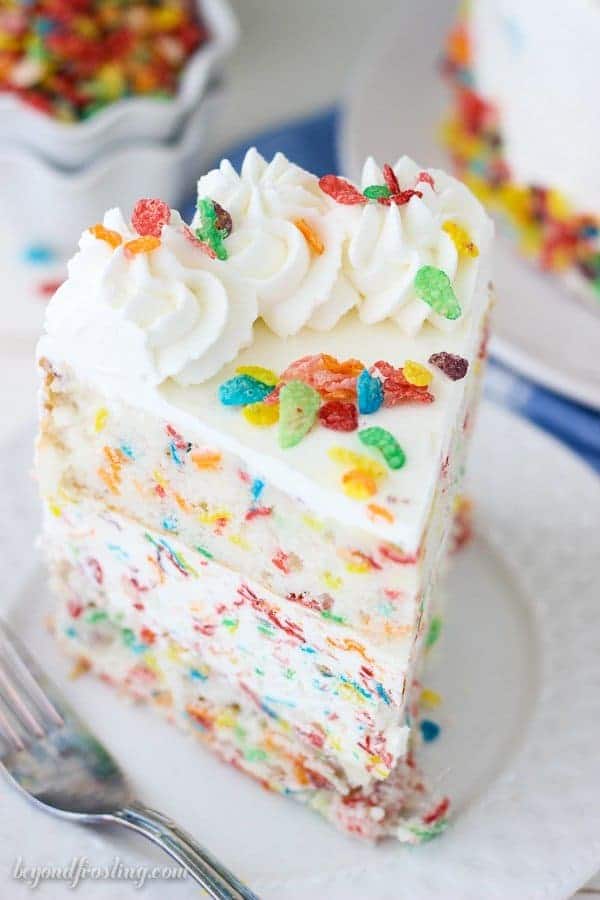 Growing up, we always made ice cream cakes for birthdays. In fact, my dad still makes himself an ice cream cake every year for his birthday. Finally I got him some 6-inch pans so he didn’t have to make a whole 4-layer 9-inch cake for himself. Not that he minded I’m sure, but it takes a single person a little bit of time to get through that much cake! 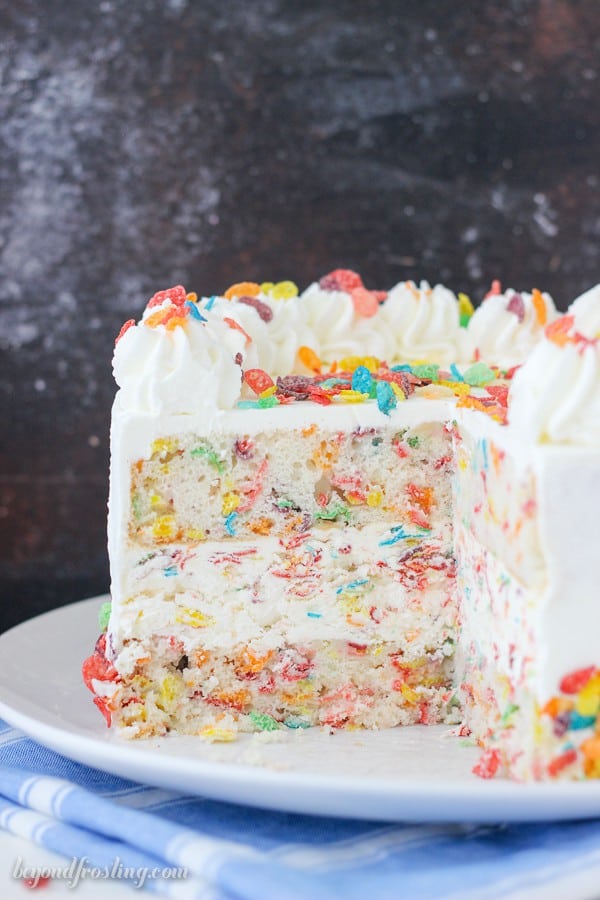 For an ice cream cake, you need three separate things. You need the cake (duh), an ice cream filling and a whipped cream topping. My favorite part of ice cream cakes is that you can get SO creative!! There’s so many ice cream flavors available, but these days, I’m making my own ice cream.

This cake first starts with a box of vanilla cake mix, which I messed around with a bit. I decided to use buttermilk for a more rich cake flavor, and I used some vanilla Greek yogurt to add a bit of moisture to the cake. I just love the way the cereal softens in the cake after it’s baked and gives you those subtle fruity bites . I used two 8-inch cake pans instead of 9-inch pans because I wanted the thicker cake. Be sure to “tort” the cake, and by that, I mean cut off the dome on top so that you have a nice flat surface on both sides of the cake. Sometimes I also like to use bake even stripes which help to eliminate the dome quite a bit. 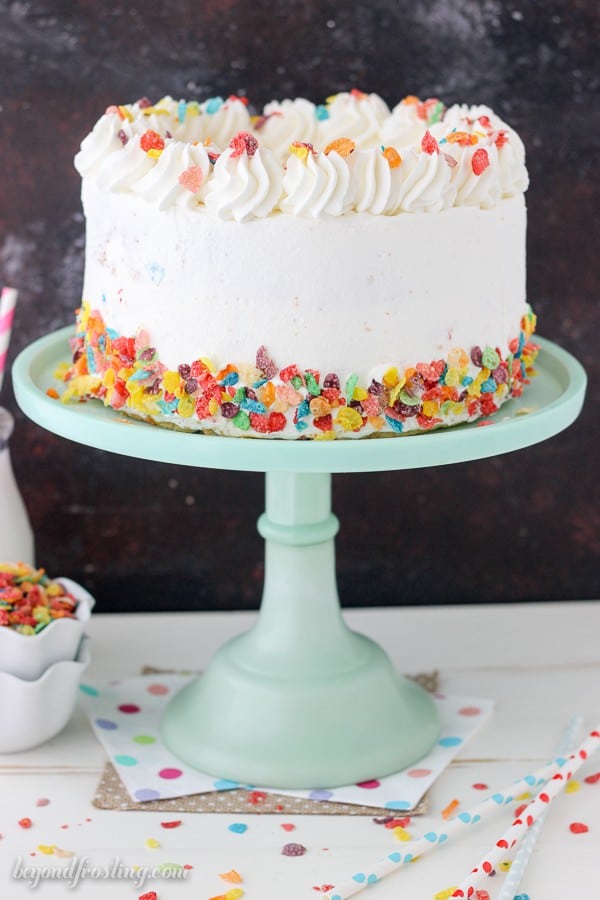 The ice cream is a simple no-churn base, meaning you don’t need an ice cream maker. The filling is made with cream cheese and whipped cream. Plus, you guessed it, Fruity Pebbles. I think I went a little heavy with the cereal in the ice cream, so I reduced it a bit for the final recipe. In the ice cream recipe, I’ve called out for both Cool Whip and homemade whipped cream. You can use both, or one or the other. I give measurements for both in the instructions. 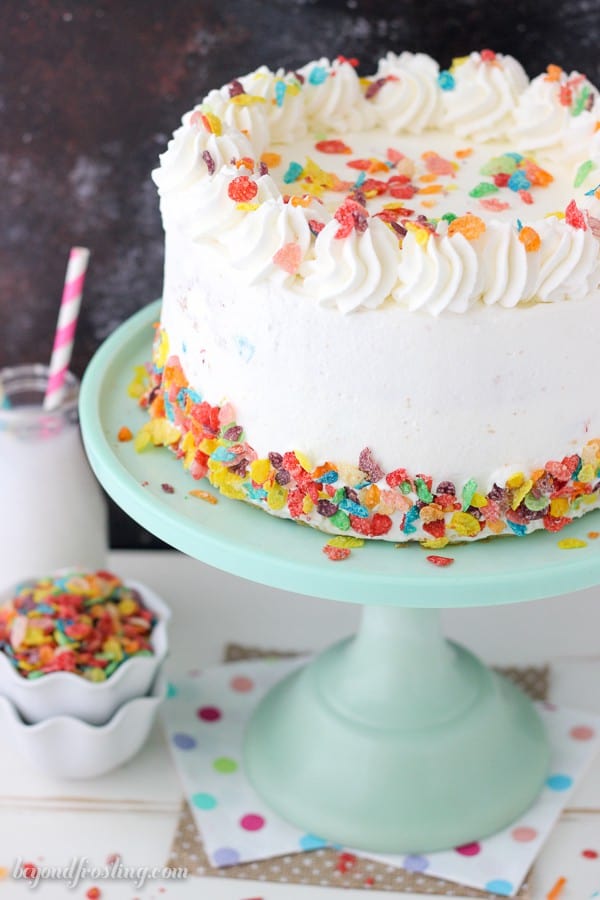 With a layer cake like this, it’s very helpful if you can build it in a pan that is the same size as the cake. This can either be your actual cake pan or a springform pan. It’s helpful to line the pan with saran wrap so you can easily lift it out after the cake is frozen. Building your cake in the pan will allow you to spread the ice cream layer nice and evenly. 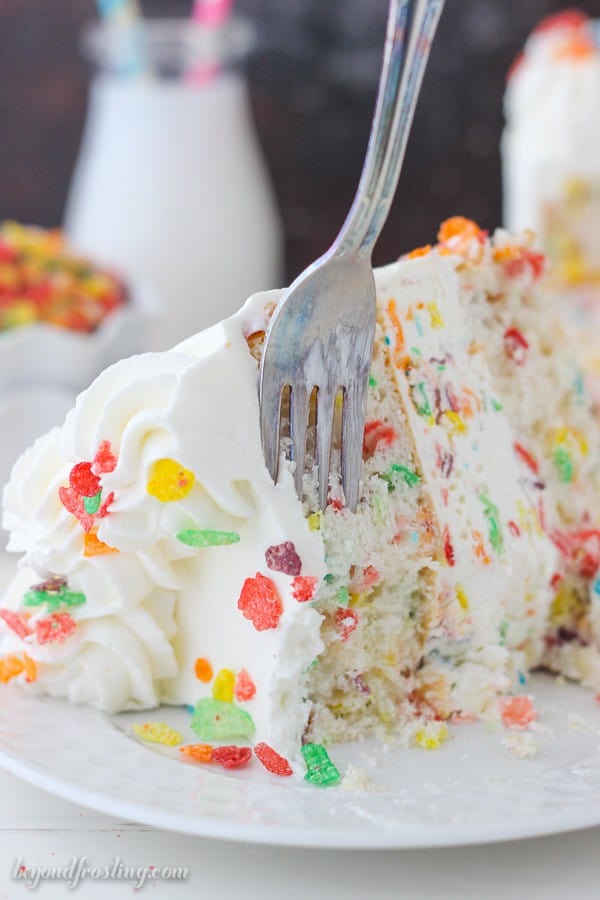 I decided not to cut the cake into smaller layers because I love the nice, thick layers of cake. However, this cake can be difficult to cut through because it’s so frozen in the middle. Besides running your knife under hot water (and drying it!) before cutting, you can let it sit out on the counter for about 20 minutes before cutting into it. OR you can change this up to do a 4-layer cake. You can cut each cake layer in half, and then divide the ice cream into thirds. There’s a chance you’re going to need more whipped cream just to cover the added surface area. You can’t loose either way. 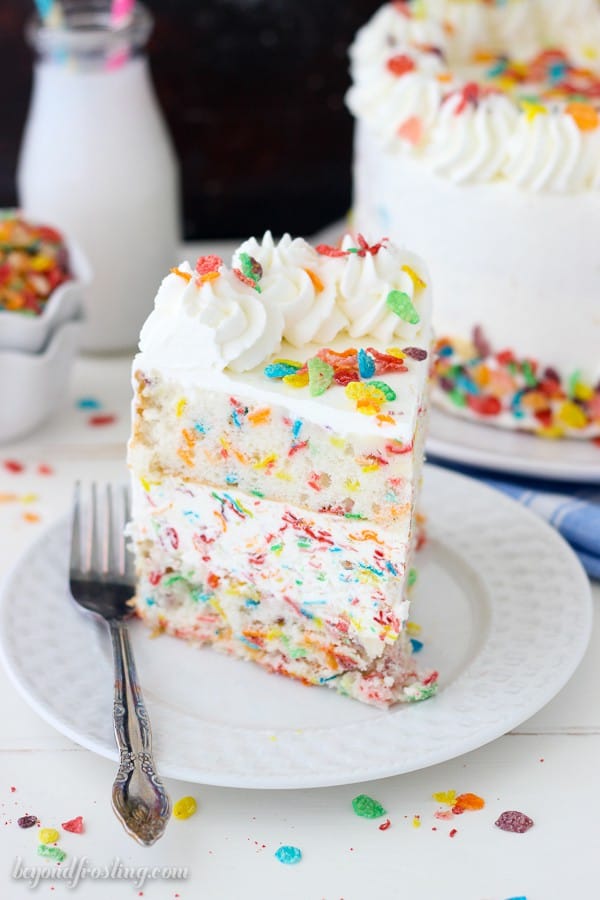 Once your cake is frozen, add the whipped cream frosting. Try your best to spread it as evenly as possible, but since it is much less stiff than actual frosting, it’s harder to get a nice smooth edge. It helps if you use a large offset spatula or bench knife to smooth out the edges. To make the decorative boarder, I used a large open star tip, the Ateco 846. It one of my go-to pastry tips! Lastly, while the whipped cream is soft, press some Fruity Pebbles into the sides of the cake. After you add the whipped cream frosting, you will want to return the cake to the freezer again for another couple of hours.

Even though the West Coast is hitting record high temperatures right now, I know this ice cream will cool you down. You just might have to skip baking the cake the first time around and go straight for the ice cream! 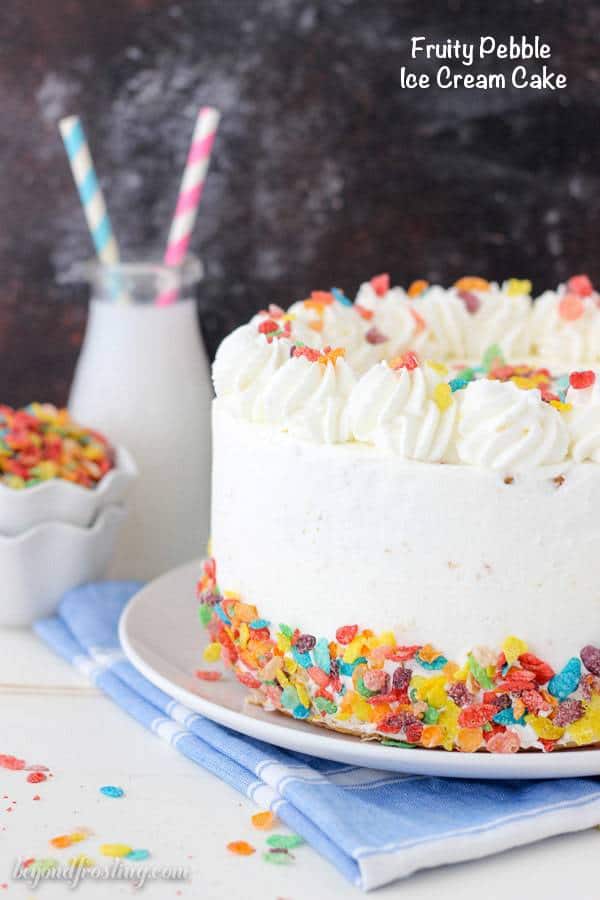 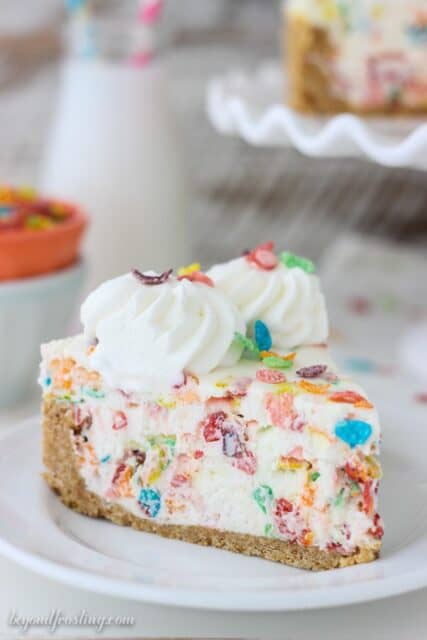 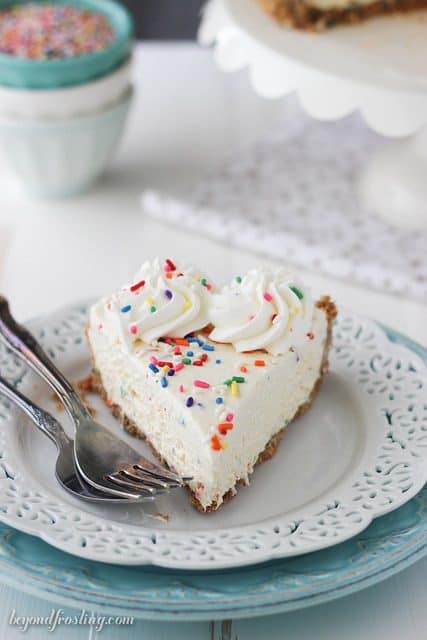 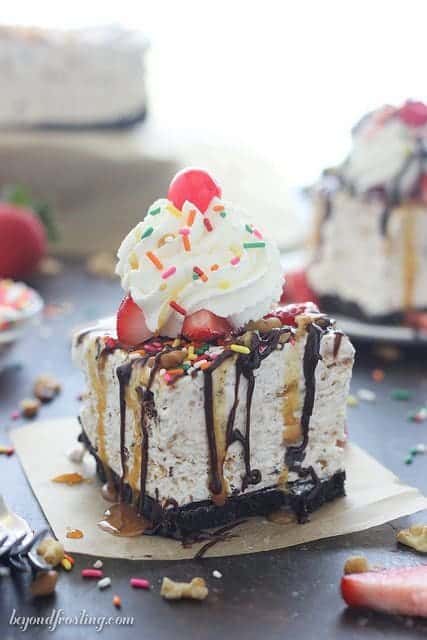 Fun recipes from my friends: