This Mocha Almond Fudge cake has layers of moist almond and coffee-flavored cake with espresso buttercream swirled with chocolate fudge sauce. To finish it off, a silky chocolate buttercream with a chocolate ganache glaze and sliced almonds. 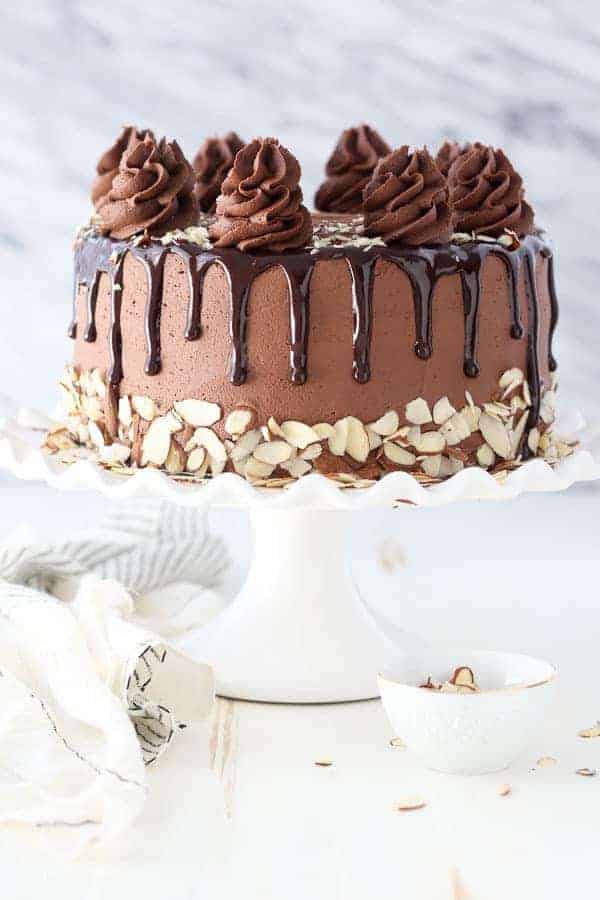 This post is sponsored by Rodelle. All opinions are my own.

I take great joy in finishing a cake like this and seeing the looks on my friends’ faces when I set it down in front of them.

I’m not a professional cake baker, yet I can still make a darn good cake, and one that can still be referred to as “too pretty to eat”. Although I don’t think I’ve ever let that stop me from digging in.

That is exactly the case with this Mocha Almond Fudge Cake. 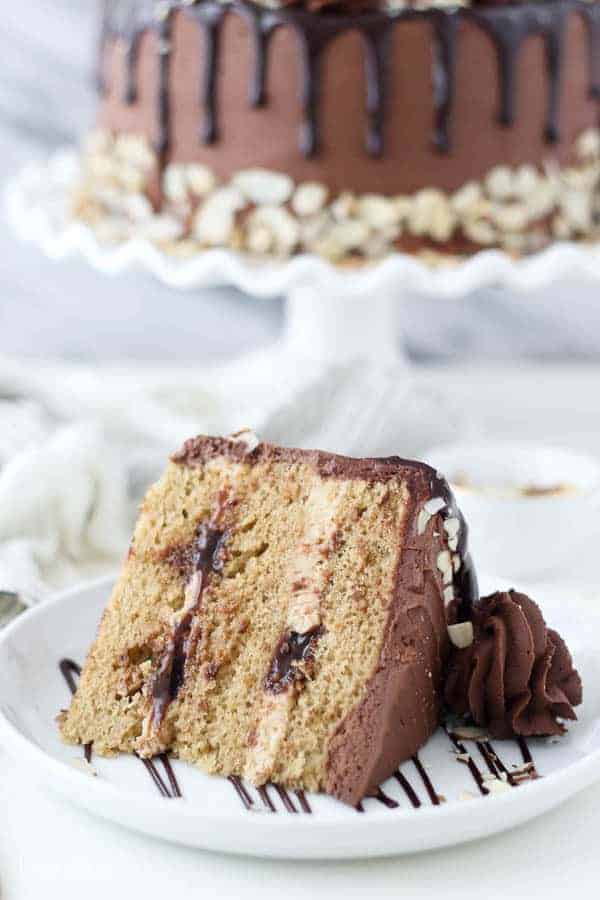 This cake has layers of moist almond and coffee-flavored cake with espresso buttercream swirled with chocolate fudge sauce. To finish it off, a silky chocolate buttercream with a chocolate ganache glaze and sliced almonds.

It’s quite a mouthful, so make sure you grab a large fork.

One of my favorite variations on my moist vanilla cake was my Mocha Cake with Kahlua Buttercream and ever since I made that cake, I’ve been wanting to turn it into a layer cake.

I’ve made some alterations to the cake itself by reducing the espresso powder for a subtler coffee flavor because we’re adding some almond extract. 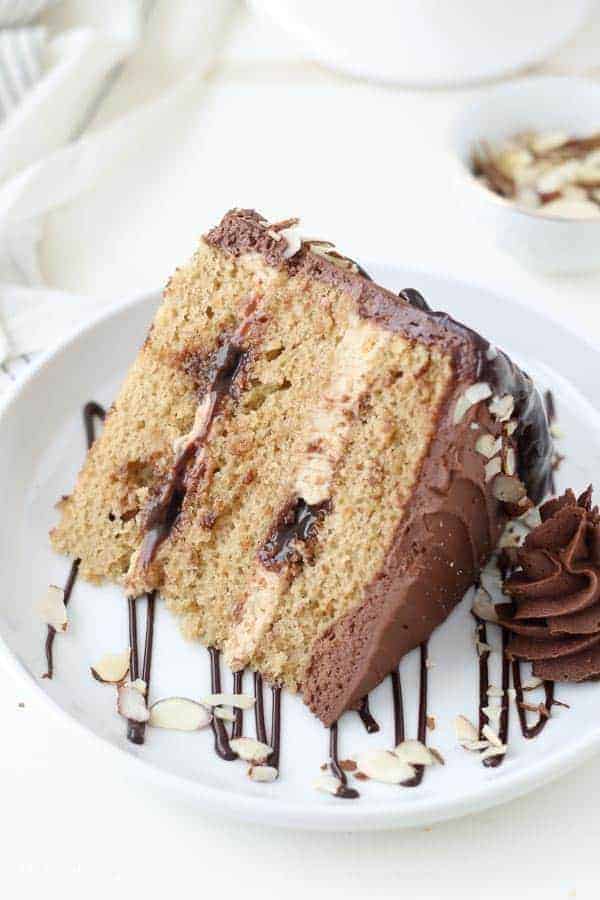 If you Google mocha almond fudge, you’ll find that most recipes are coffee-flavored with swirls of fudge and sliced almonds, but that wasn’t enough almond flavor for me.

At first, I was unsure if the almond extract would work well with the coffee-flavored cake, but boy was I wrong.

Neither flavor overpowers the other, but instead complement each other and it smells just amazing, especially when it’s baking. Think of that nutty aroma you get from a freshly brewed cup of coffee.

For the almond extract, it’s important to use a high-quality pure extract. Thankfully my friends at Rodelle are there by my side. 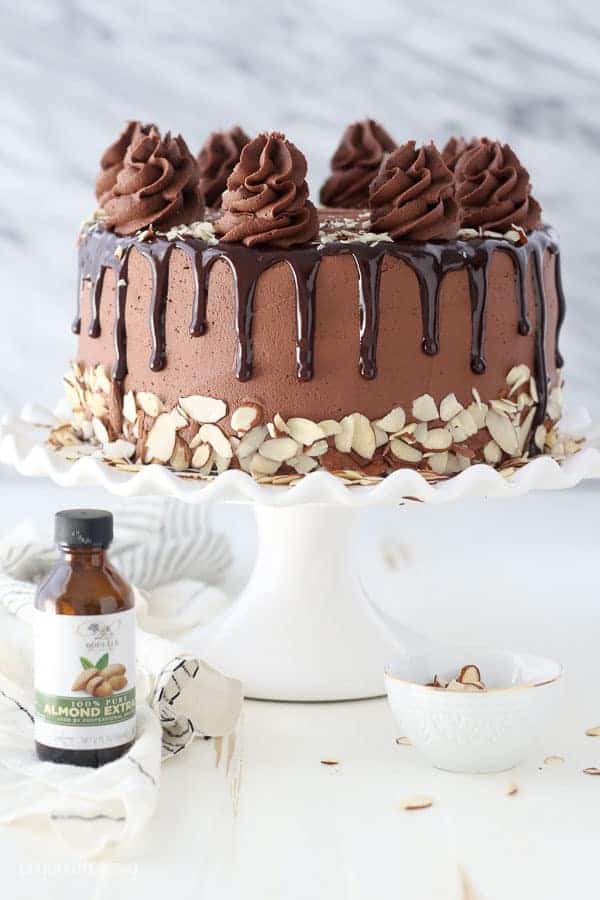 Their pure almond extract  uses the purest ingredients and is actually free from tree-nuts. This means if you have a tree nut allergy, you can still make this cake! When you’re decorating it, just leave off the sliced almonds and you’re good to go.

I don’t like to mess around when it comes to flavors in my baking, and ever since I was introduced to Rodelle vanilla extract, I’ve never looked back.

You might have seen my Instagram last week, when I was visiting my fellow blogger and baking friend, Lindsay, I opened her cabinets and she had several large bottles of Rodelle Vanilla Extract.

I promptly asked her where she got them, and she said her local Costco carries them. I asked her if we could go so I could pick up a few bottles.

Together we checked out with 7 bottles of vanilla extract and I packed 4 of them away in my suitcase to bring back to Portland.

I’m obsessed. But I also love the partnership that Rodelle has formed with their vanilla farms, and their dedication to improving the lives of their those farmers and the community. I’ve always had an appreciation for the hard work that goes into farming our food. 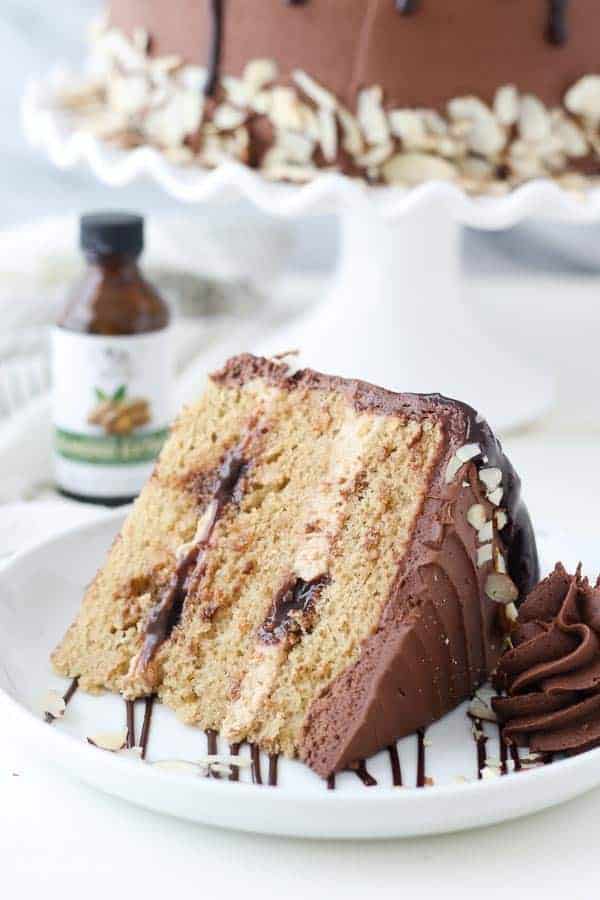 So, let’s get back to this cake.

There are several steps involved to make an assemble, but once you break it down, it’s much less intimidating. Once the cake is cooled, we can get started on the filling and the frosting.

For the filling, I made an espresso buttercream. Then I swirled the buttercream together with hot fudge sauce.

Between each cake layer, I added three or four concentric circles of the espresso buttercream, leaving a gap in between them. Then I filled in those gaps with hot fudge sauce.

It’s a beautiful thing to cut into this cake and see the pocket of hot fudge on the inside, am I right? 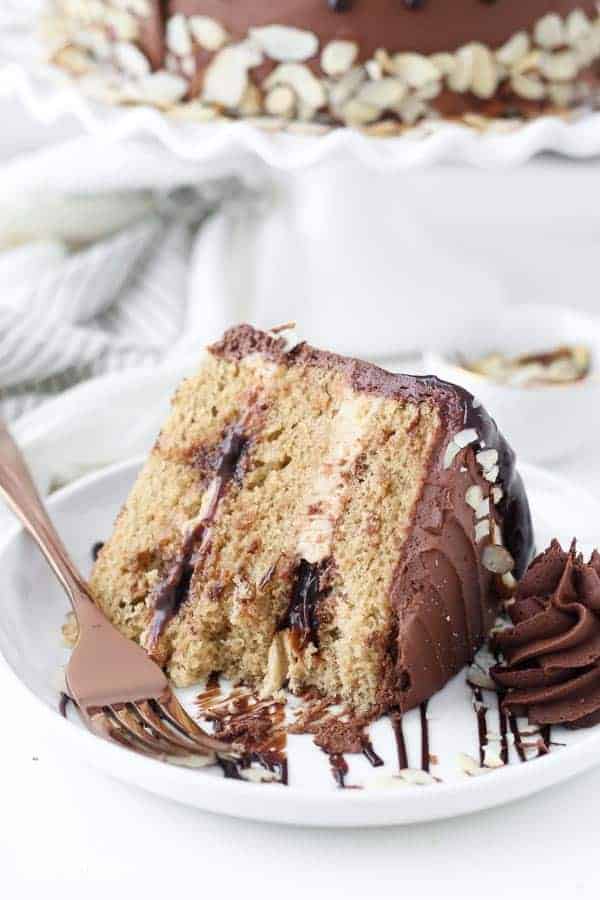 For the hot fudge sauce, I used a store-bought version, which you can usually find near the ice cream and toppings. It’s very easy to work with.

Once you’re done with the filling, it’s time to frost this cake. I chose a chocolate frosting because the hot fudge sauce just wasn’t quite enough chocolate required for this recipe. You’ll notice my recipe starts with cold butter. This is not a mistake.

I am a firm believer that starting with cold butter and whipping it until it’s light and fluffy produces the best frosting, especially for piping. It’s full of air pockets and is incredibly smooth.

Since the butter is cold, you’ll spend several minutes whipping it before adding any of the dry ingredients and you’ll need to scrape down the bowl a few times. 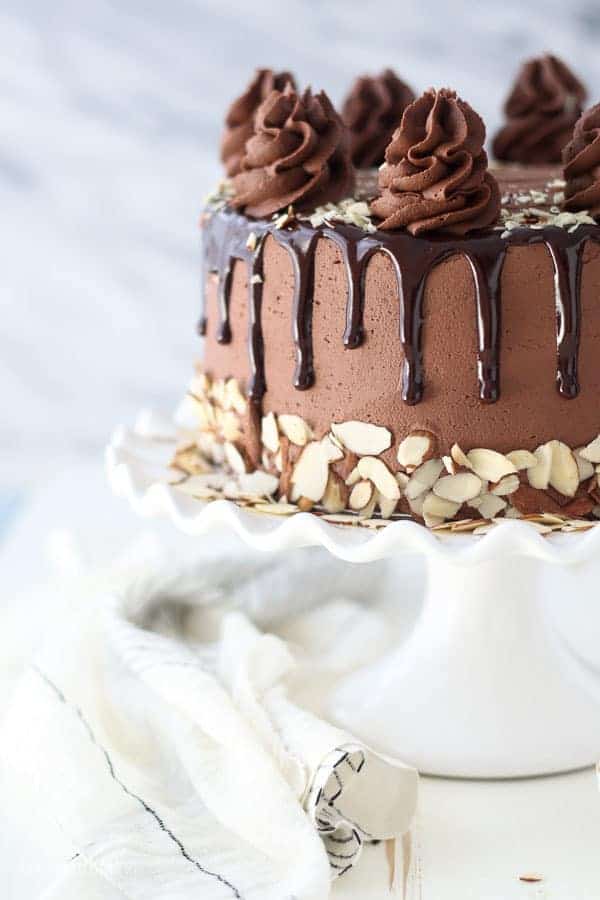 Don’t skimp on the cocoa powder here, that’s where this frosting gets all of its flavor from. As I mentioned previously, I am using Rodelle’s gourmet baking cocoa, which is a Dutch process cocoa powder.

When it’s time to frost your cake, you’ll want to add a crumb coat layer of chocolate frosting. This ensures you have a smooth surface to work with.

To add the final layer of frosting, I used a large piping bag fitted with a cake icing tip (789) which pipes large ribbons of frosting that are even and much easier to smooth out. If you don’t have one of these, then I suggest using a large open round tip.

You’ll definitely have some leftover chocolate frosting. This is intentional, because you can use the leftover to decorate the top.

I also think there is nothing worse than running out of frosting before you finish your cake. So, I err on the side of having too much rather than too little. 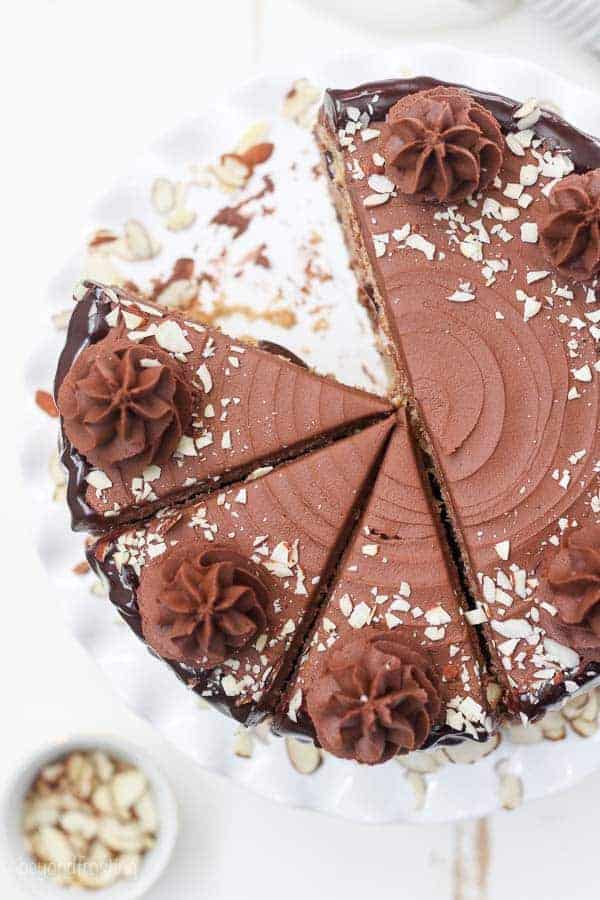 Once your cake is fully frosted, it’s time to garnish. I pressed sliced almonds along the bottom edge of the cake so there was a little bit of crunch.

Then, I added a chocolate ganache drizzle. This is totally optional, but I think it gives this cake the ultimate wow factor.

Finally, pick your favorite piping tip to decorate the top. I like to use a large open star tip such as the Ateco 846 or 849. Then crush some of the sliced almonds in your hands and sprinkle them around the top.

When you’re finally ready to dig in, make sure you grab a glass of milk to wash this one down, then invite me over for a slice.

This post is sponsored by Rodelle. All opinions are my own.

This Mocha Almond Fudge cake has layers of moist almond and coffee-flavored cake with espresso buttercream swirled with chocolate fudge sauce. To finish it off, a silky chocolate buttercream with a chocolate ganache glaze and sliced almonds.

For the ganache (optional): 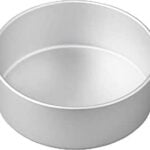 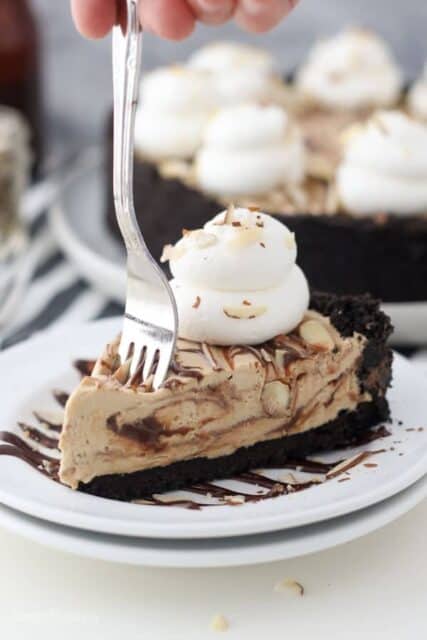 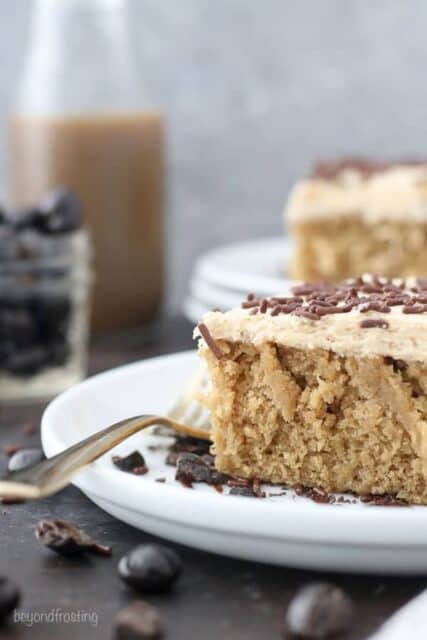