This mouthwatering Triple Chocolate Brownie Mousse Cake is so sinful. There’s a fudgy brownie on the bottom, a layer of easy chocolate mousse, and finally a layer of irresistible brownie batter mousse. Tell me you don’t want to dive right in. 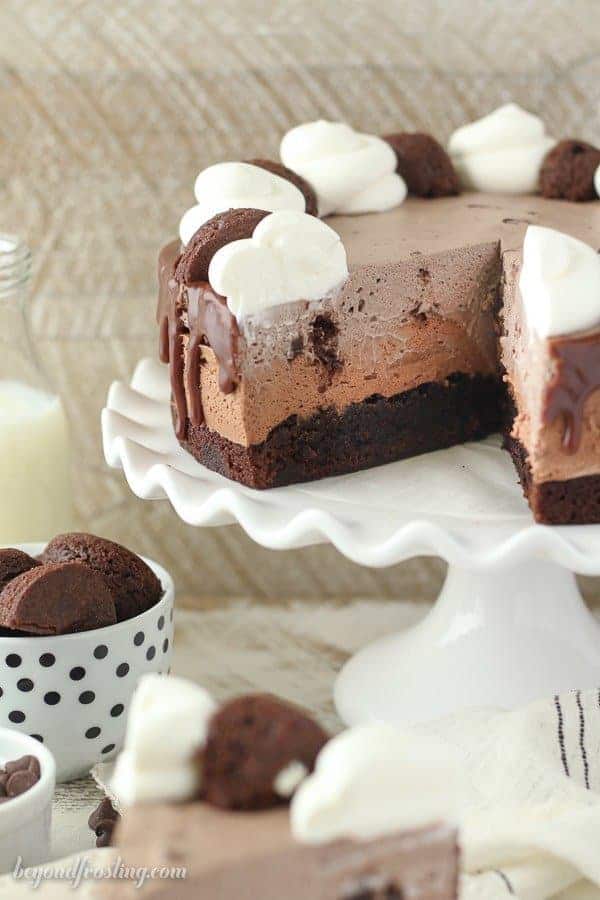 We’re starting off the week with the most ahhhhhmazing Triple Chocolate Brownie Mousse Cake. This dessert is for serious dessert lovers only, because it’s not the quickest cake to make but it is very well worth the wait.

It’s a fudgy brownie layer on the bottom with a layer of no-bake chocolate mousse topped with a drool-worthy brownie mousse layer. Finish off this dessert with chocolate ganache, whipped cream, and chopped brownies. 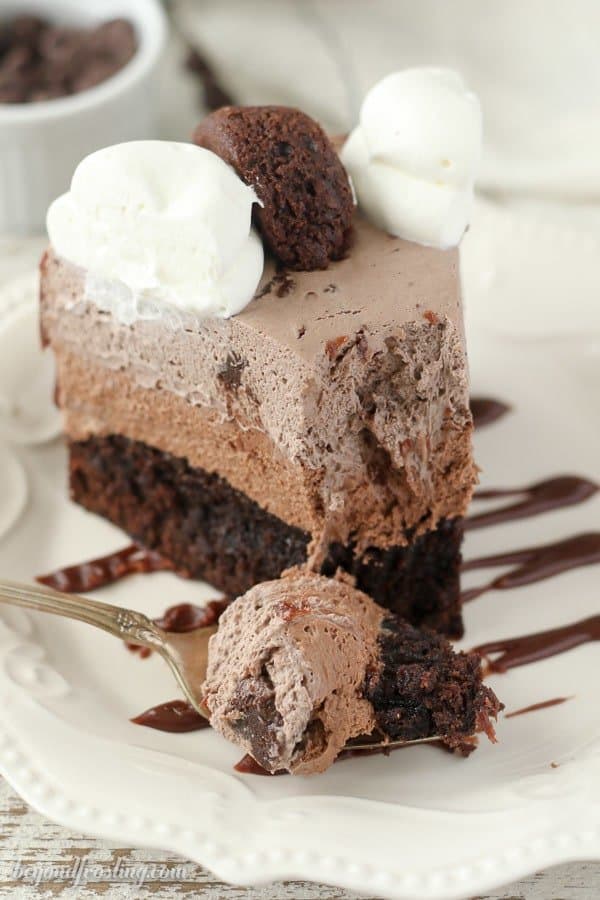 It looks like a lot of steps with a lot of ingredients but it’s actually a few repetitive steps for each layer.

Let’s break it down. 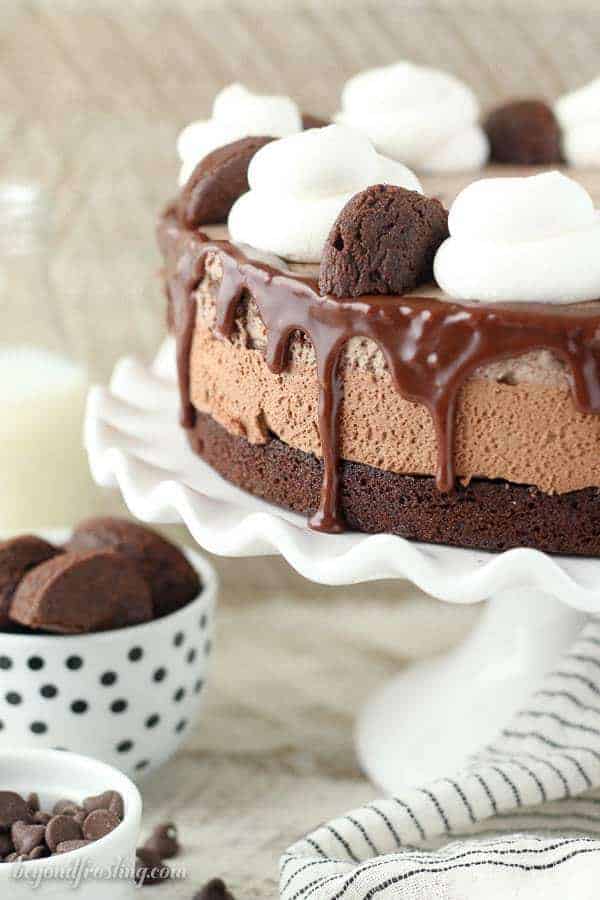 You’ll use the same pan to bake the brownie and assemble the dessert.

The next layer is a delicate chocolate mousse, light and airy and not overly rich. It’s made with cream cheese, whipped cream, melted chocolate, and cocoa powder. It’s also made using gelatin which gives it the perfect light and airy texture.

You’ll find this recipe is similar to one I’ve used for my Brownie Bottom Chocolate Mousse Pie and I’ve since altered the recipe for a Funfetti and a Mint brownie version as well. THAT is how much I love this mousse. 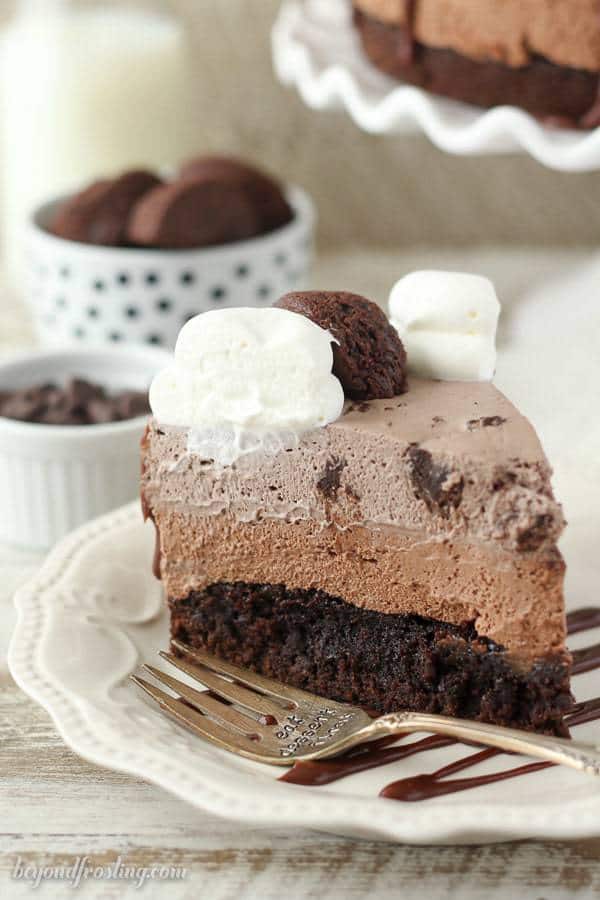 The final layer is the brownie batter mousse. You guys, this stuff is straight-up addicting on a whole other level. It’s made like whipped cream, but instead of powdered sugar, I substituted brownie mix and added chopped brownies.

The texture is quite light, similar to whipped cream, but I’ve added gelatin, which makes it a little airier like a mousse.

It’s not overly chocolatey because the brownie mix is not as potent as cocoa powder. The chopped brownies are the perfect addition because they add to the overall texture, and give you that punch of chocolate. I could eat this stuff all day long.

I can’t get enough of this stuff! I first made it when I made my Brookie Icebox Cake and I knew there would be more versions in my future. 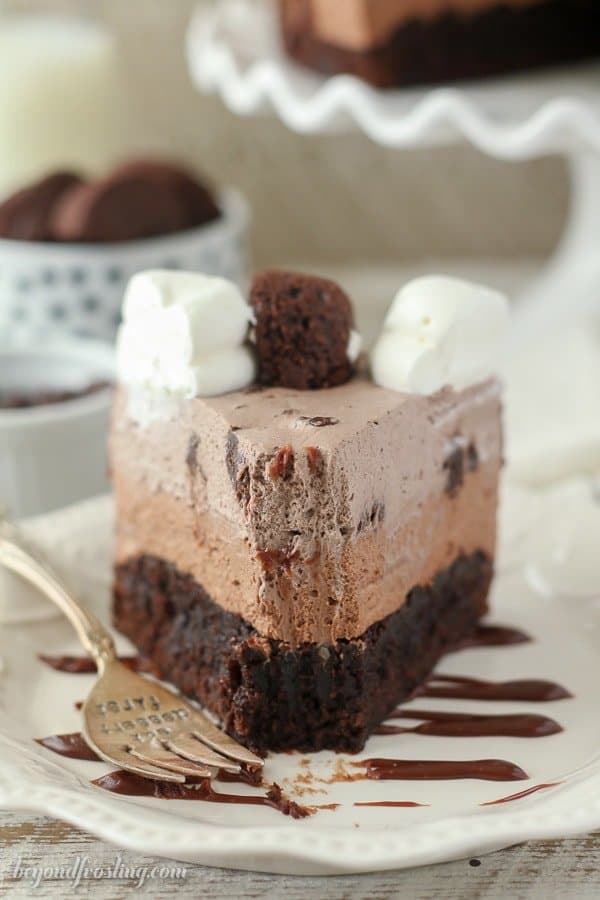 This magical dessert all happens in your trusty springform pan. You’ll bake the brownie in it, and then you’ll use it to build each layer of mousse. Then you’ll peel back those edges and see each glorious layer of chocolate waiting for you.

The one thing I can’t live without these days are my cake collars. These sheets of acetate help make those edges extra clean because they act as a barrier between the sides of the pan and the filling. A good alternative for this would be parchment paper or Saran wrap. Line the inside edges of your pan with either one of those and you’ll be off to an even better start. 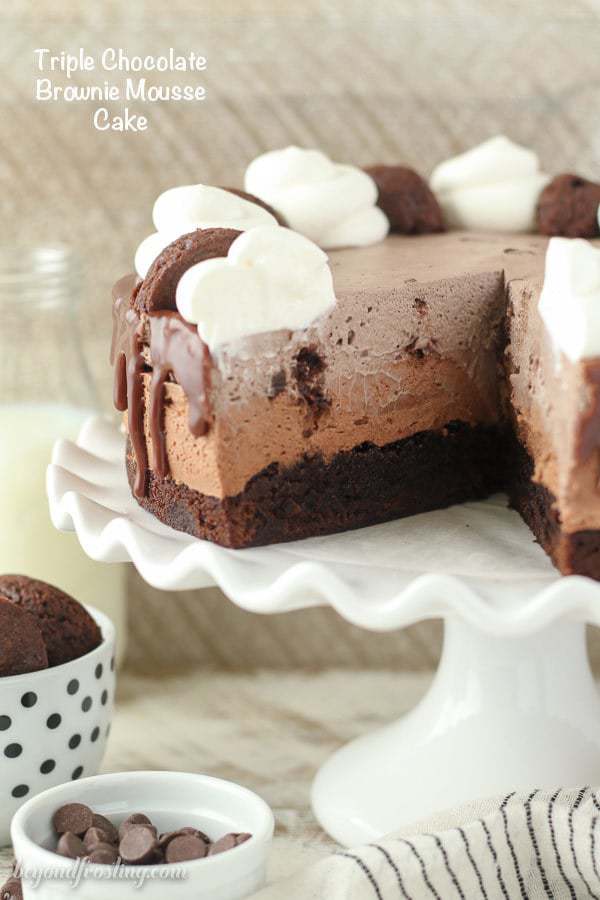 Finally, this cake is garnished with some drippy chocolate ganache, whipped cream, and more brownies. After making the layer of brownie on the bottom, I opted for a box of store brought brownies to add to the mousse and I used the leftovers for garnish. This is where your creativity comes into play. You certainly don’t have to add all these components to the top, but it sure is pretty.

I am not joking when I tell you that this thing disappeared in the blink of an eye and rightfully so!

The mouthwatering Triple Chocolate Brownie Mousse Cake is so sinful. There’s a fudgy brownie on the bottom, a layer of easy chocolate mousse and finally a layer of mouthwatering brownie batter mousse.

For the brownie layer: (from scratch options listed in notes)

For the chocolate mousse:

For the brownie batter mousse:

For the chocolate ganache (optional):

For the whipped cream topping:

For the brownie layer:

For the chocolate mousse:

For the brownie batter mousse:

For the chocolate ganache:

For the whipped cream topping: 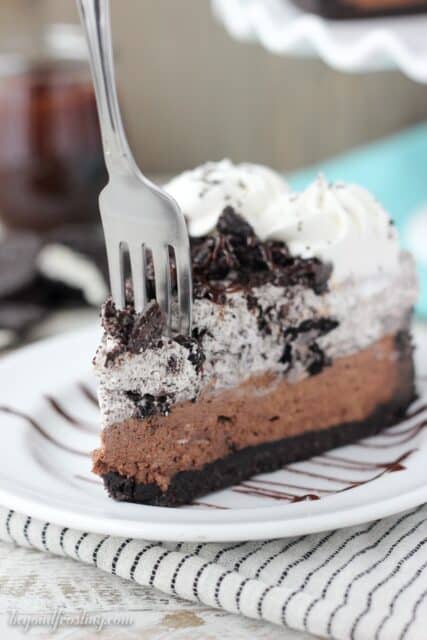 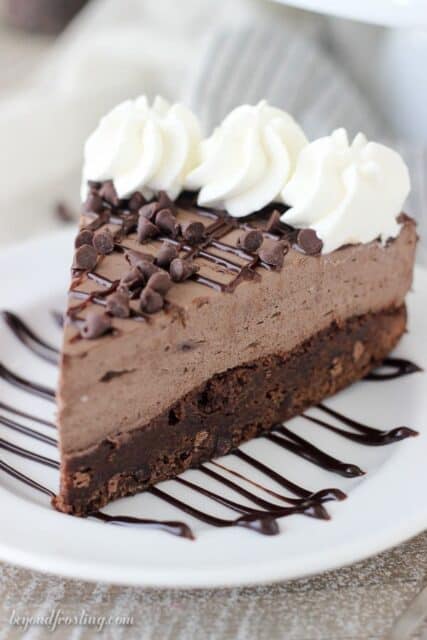 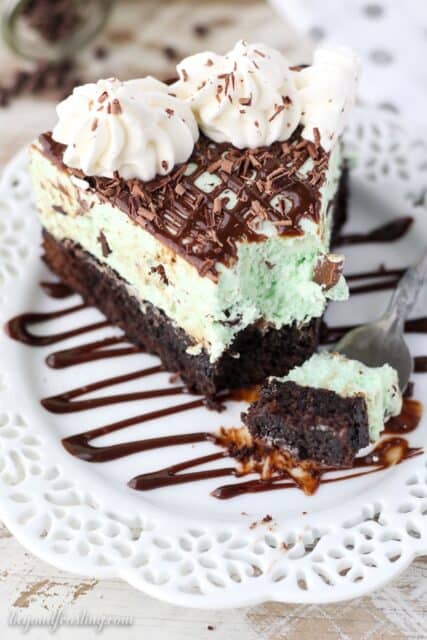 Mouthwatering recipes from my friends: