This Homemade Funfetti Poke Cake is a moist vanilla cake loaded with sprinkles. It has a vanilla pudding filling and it’s topped with a cake batter whipped cream.

What is better than sinking your teeth into a homemade cake, especially if it’s funfetti. Ever since I made my first batch of moist vanilla cake, I’ve been remaking old recipes and converting them from cake mix to homemade. I thought this homemade Funfetti Poke Cake needed a bit of a facelift.

The difference between my moist vanilla cake and this funfetti cake is that I swapped the milk for buttermilk. It is not required to use buttermilk, but I like the tangy flavor it adds to the cake. Seriously, I can’t stop after just one bite. I LOVE this cake, and the original moist vanilla cake has rave reviews. 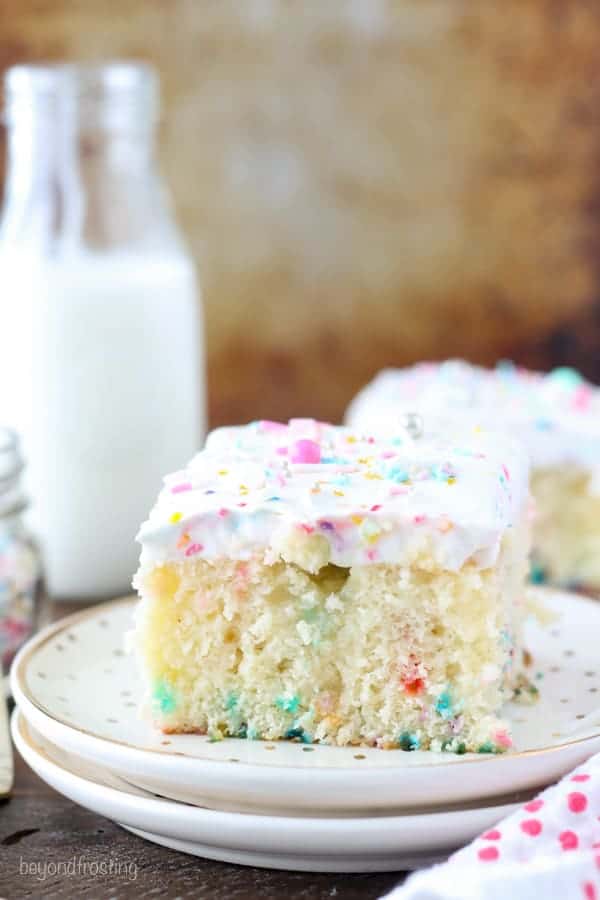 I’ve also listed the sour cream as optional. The addition of sour cream helps keep this cake super moist, even after its been refrigerated for a couple of days. However, since this cake has the pudding filling, it’s not necessarily required. The sour cream also produced a bit more of a denser cake, almost a sponge-like texture.

When I originally created this poke cake recipe, I made it with cake mix & sweetened condensed milk. However, when I revamped the recipe, I decided to use vanilla pudding instead because I just love the combination of the cold cake with pudding. 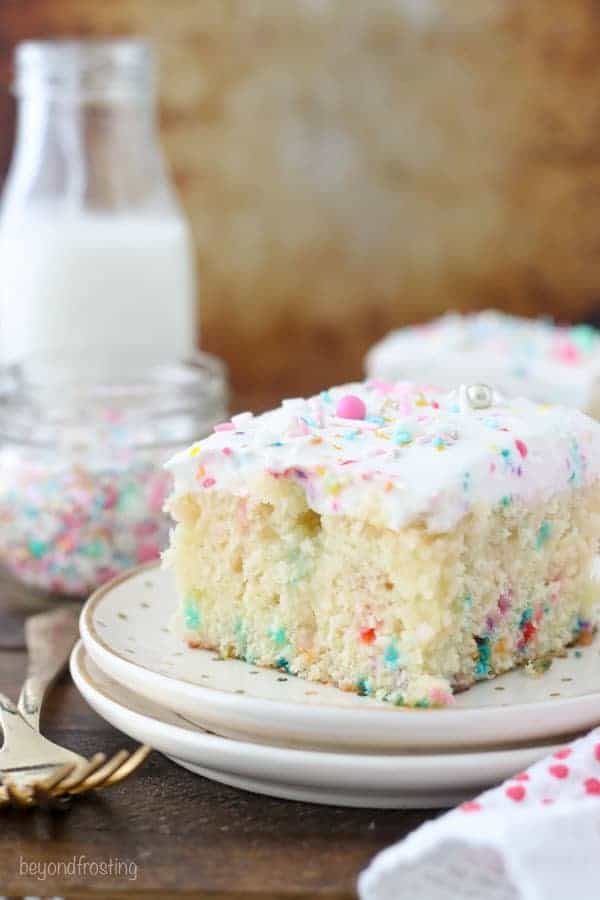 My personal favorite is the Jello Simply Good vanilla pudding because it’s made with no artificial ingredients or preservatives and it even has vanilla beans! Once I discovered this, it replaced all other vanilla pudding in my house!

The one thing I didn’t change was the cake batter whipped cream. This stuff is like gold in my house. It’s a homemade whipped cream but instead of sweetening it with powdered sugar, I use powdered vanilla cake mix. The results are like a thick mousse and truly delicious! 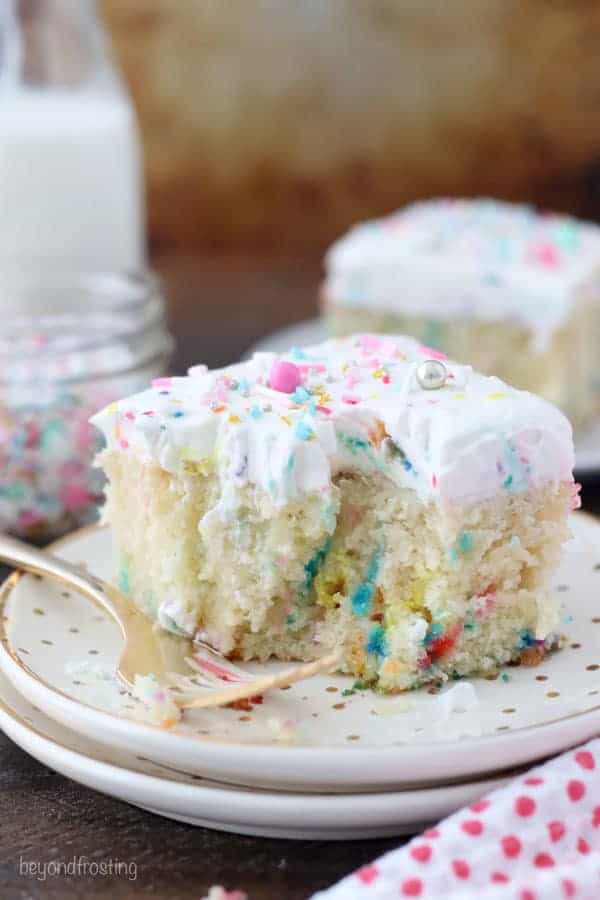 Some people have asked if it’s safe to consume raw flour. That is your decision. You can heat treat the vanilla cake mix prior to adding it to the heavy cream, but I suggest sifting it first because of its heated, the cake mix sticks together a bit.

I’ve made plenty of desserts with the cake batter whipped cream at this point and it’s it one of my favorite toppings! It’s great for cakes or cupcakes, or even as a dip!

Next time you need a dessert for a potluck or a birthday party, surprise your guests with this easy, homemade Funfetti Poke Cake! 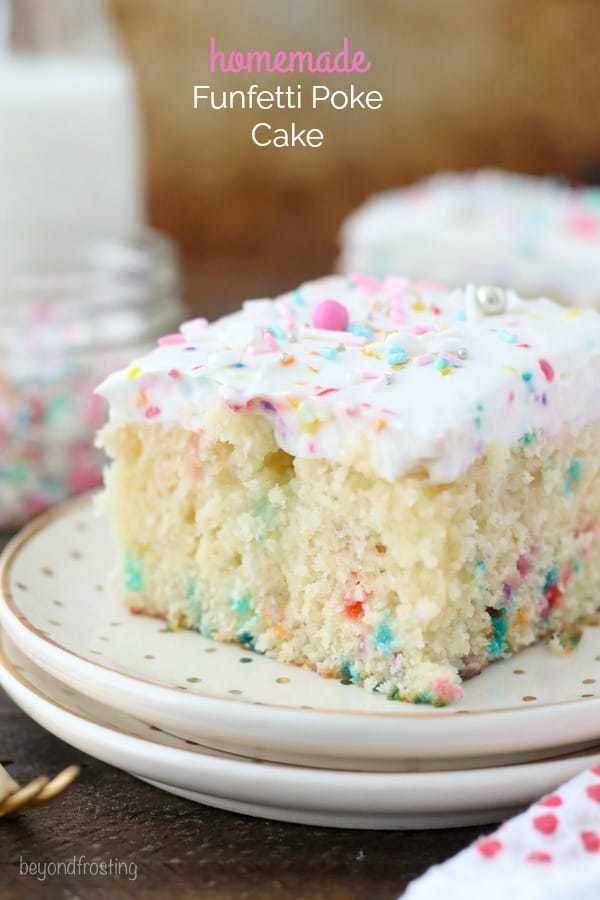 This homemade Funfetti Poke Cake is a moist vanilla cake loaded with sprinkles. It has a vanilla pudding filling and it’s topped with a cake batter whipped cream. 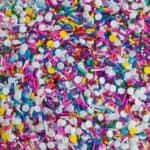 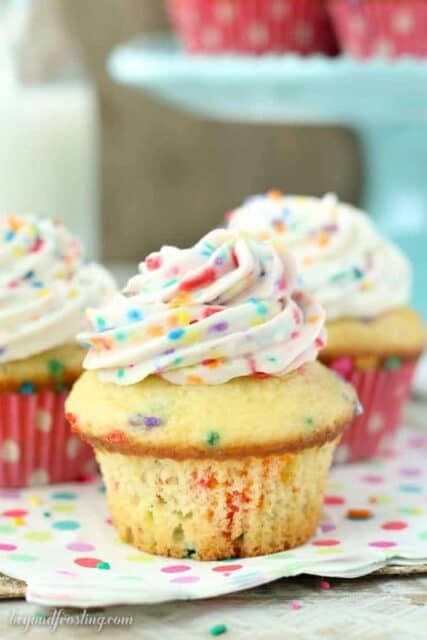