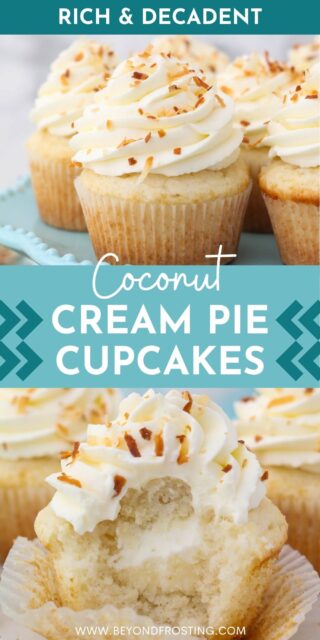 If you’re a coconut fan, then you’re going to absolutely love these Coconut Cream Pie Cupcakes! There’s a reason readers rave about these.

Now, the cupcake base for this recipe is good enough on its own, but I thought I’d take it up a notch and fill the cupcakes with the vanilla pudding filling from my coconut cream pie cookies.

Folks, I don’t think I’ve ever made a better decision in my life.

These coconut cream cupcakes are infused with coconut in every single bite. In the cupcakes, you’ll find shredded coconut, coconut milk, and coconut extract. They’re moist, light, fluffy, and topped with cream cheese whipped topping! Plus the toasted coconut on top gives a little bit of nutty flavor and texture.

What Type of Coconut Milk Should I Use?

I use Thai Kitchen canned coconut milk in this recipe and it works great! You can find it in the Asian foods section of most grocery stores. Be sure you give the coconut milk a good stir before adding it to the cupcakes. It separates as it sits in the can.

These coconut cream cupcakes are made up of three simple components: cake mix cupcakes, a simple pudding filling, and a light and fluffy whipped topping.

Why I Use Cake Mix for Cupcakes

Convenience! I love using cake mix for cupcakes because it contains flour, sugar, and a leavening agent. It’s also more reliable for first-time bakers. While completely made-from-scratch desserts are great, there’s nothing wrong with taking a shortcut now and again. Especially when it tastes this good!

Here’s Some Tips For the Best Cupcakes

Can Coconut Cupcakes Be Made Ahead of Time?

How to Properly Store Finished Cupcakes

Once you fill and frost the cupcakes, they must be stored in the refrigerator. They will last in an airtight container for up to 3 days. In order to prevent the cupcake and frosting from drying out, make sure your container is airtight.