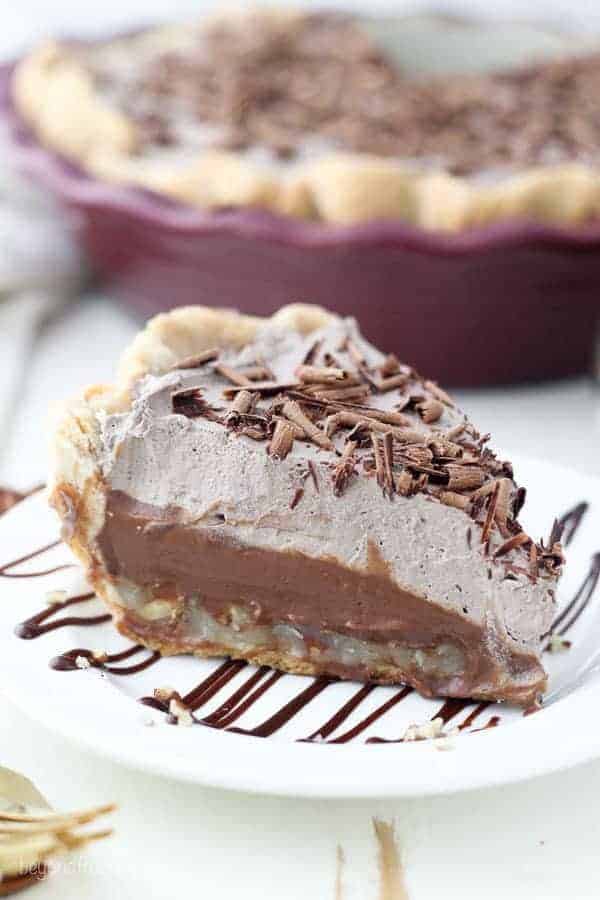 This pie you guys, can you even handle all the layers? You’ll need an extra big fork to cut through them.

This past summer I traveled to San Francisco for work and while I was there, I called up my friend Dorothy from Crazy for Crust to meet me for brunch. After we stuffed our faces (with the best biscuits ever), we decided to order not one, but two desserts.

Dorothy loves pie and they had a German Chocolate Pie on the menu, so that was an obviously choice. I am sorry to say the pie was a major letdown. It was basically a pile of whipped cream with some coconut and pecans sprinkled on top.

We both agreed we could do waaaay better. So, I set to make my own German Chocolate Pie recipe. 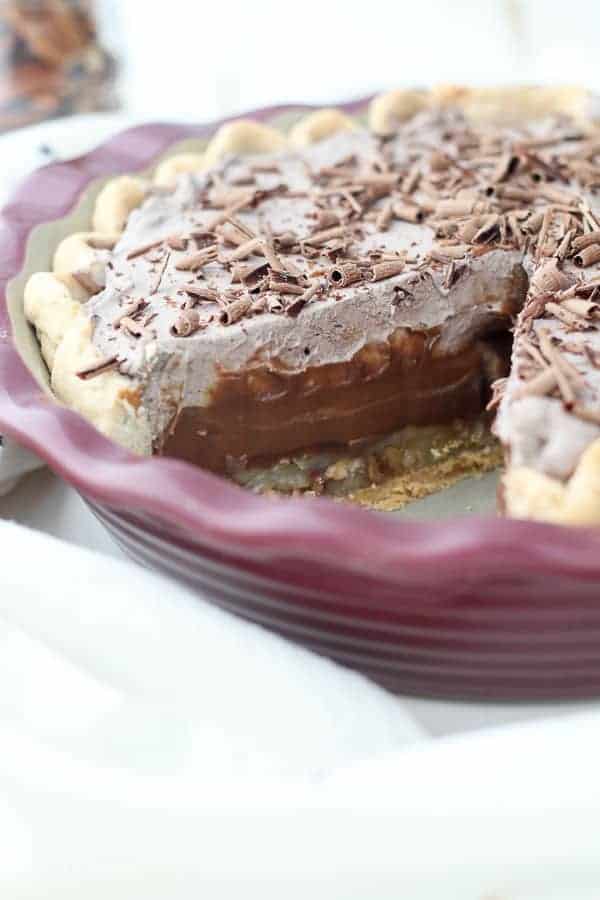 This German Chocolate Pie has a layer of gooey coconut pecan filling , a homemade German chocolate pudding and a layer of chocolate whipped cream in a flakey pie crust.

This recipe is not a quick one to make, so be sure to plan accordingly.

That bottom layer is a homemade gooey coconut pecan filling. It’s made on the stovetop with melted butter, sugar coconut, pecans and heavy cream. It’s fairly quick and easy to do. I just just eat this with a spoon. 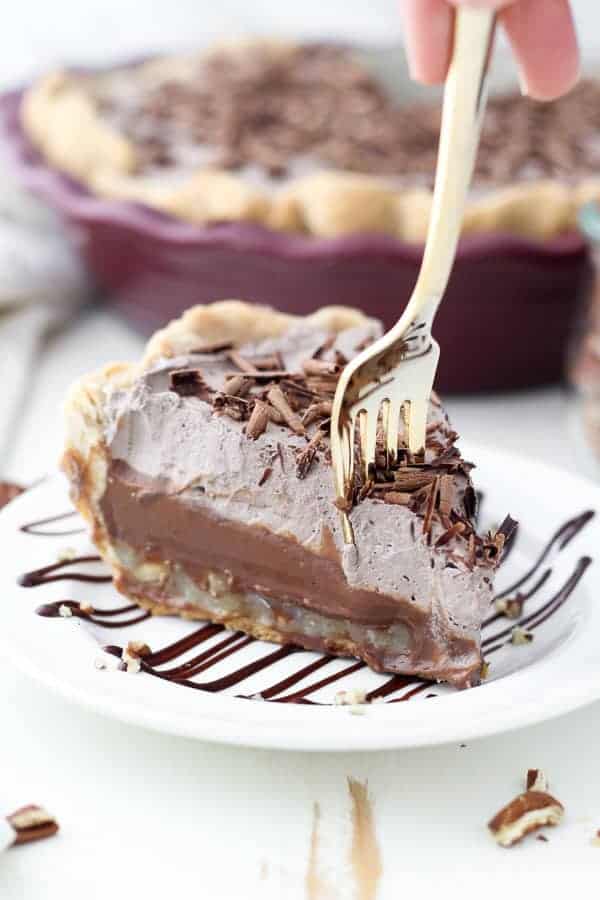 The first time I successfully made a homemade pudding, I felt like I could conquer the world. For so long, I was intimated by the process and worried about cooking the egg yolks properly, but you guys, there is nothing to be scared about. I promise, we’ll walk through it together.

Finally, I needed a topping for my German Chocolate Pie. I debated back and forth between a traditional homemade whipped cream or a chocolate whipped cream. Obviously, you can see I decided on the chocolate version. More chocolate is definitely not a bad thing here.

Tips for Preparing The pie crust

Before you can get too far with this recipe, you’ll have to blind bake a pie crust. I am not going to sugarcoat it, I am terrible when it comes to making a pie crust. They’re never pretty. 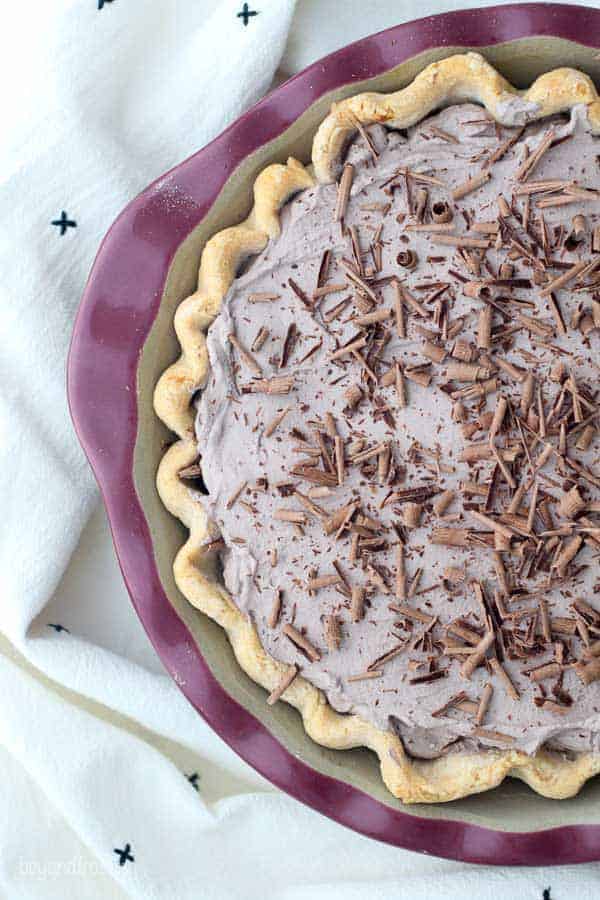 For this pie, I used a deep dish pie plate, and I used Sally’s suggestion of making dough stripes to add additional height to the edges of this pie but with my own pie crust recipe. In this post, I go into detail about the proper way to blind-bake the crust using  pie weights. If you don’t have pie weights, I suggest using dry beans.

Once its cooked and cooled you can start adding the filling. 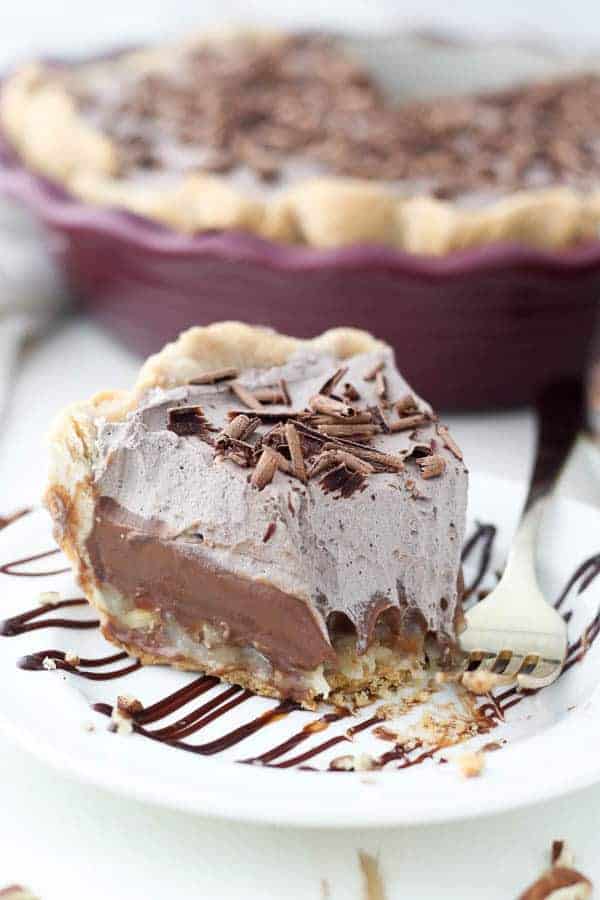 How to make the coconut pecan filling

You might recognize this coconut pecan filling because it’s the same one I used for my No-Bake German Chocolate Cheesecake and it’s super easy to do.

Just combine all of your ingredients on the stovetop and cook until the filling thickens. The liquid will bubble and after it’s been boiling for several minutes, you’ll add the coconut and pecans. 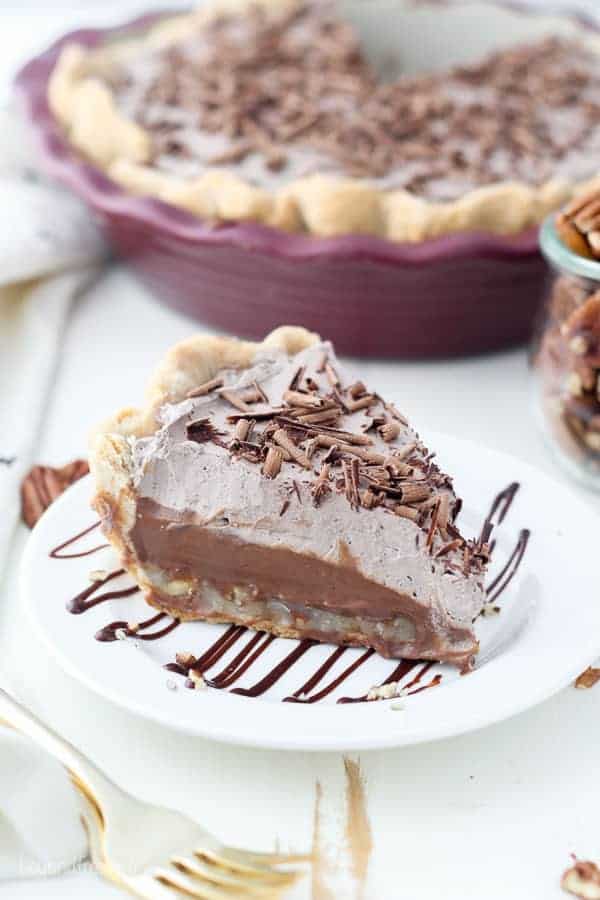 Before you start making your pudding, be sure that you have everything prepared and ready to go. Don’t plan on multi-tasking while you’re making the pudding, you need to be nearby for frequent whisking.

Start by combining the flour and sugar with your liquid ingredients and stir frequently to help dissolve the dry ingredients.

Once it’s warm, but not boiling, take about ¼ cup of the hot liquid and pour it into the egg yolks while you are whisking. You need to whisk continuously to prevent the yolks from cooking when they come in contact with the warm liquid.

Then pour that egg mixture back into your bowl. You’ll notice the pudding will start to thicken fairly quickly after you add the eggs but keep whisking just until it starts to buddle. 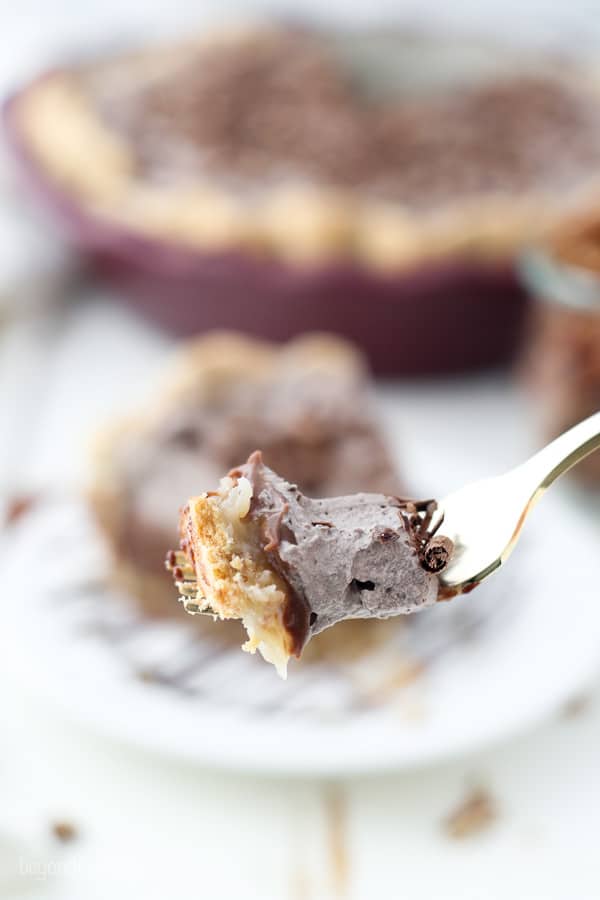 Finally, you’ll add the chopped chocolate into the pudding and whisk it until it’s completely smooth.

It’s important that you strain the pudding right away through a fine mesh sieve in order to remove any of the lumps of dry ingredients that did not incorporate. I actually do this twice, washing the sieve in between.

Then you can strain the pudding right into your pie crust. Immediately cover the crust with saran wrap and poke a few holes in the plastic with a toothpick. The saran wrap prevents a skin from forming on the top of the pudding.

Unfortunately, you’ll need to wait for that pudding to cool completely. Pop that baby in the refrigerator for a couple of hours so the pudding can set.

Finally, FINALLY we are ready to add that chocolate whipped cream topping.

I know this German Chocolate Pie is not a quick dessert to make, but at least you’ll know your that hard work pays off when you take that first bite. 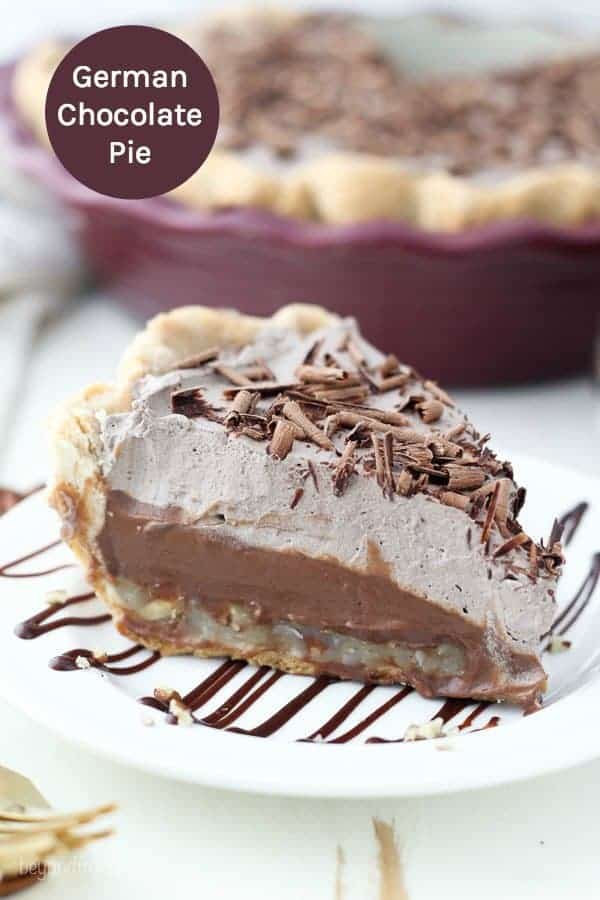 For the coconut pecan filling

For the chocolate pudding

For the whipped cream topping 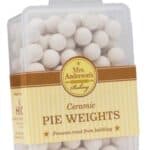 There are multiple steps to make this pie. It’s best to prepare the crust the day before filling. You can also prepare the coconut pecan filling in advance and store it in the refrigerator. Allow enough time for your pudding to set and cool before adding the whipped cream topping.

If you want to ensure the sides of the pie are nice and tall, I recommend doubling the pie crust recipe. 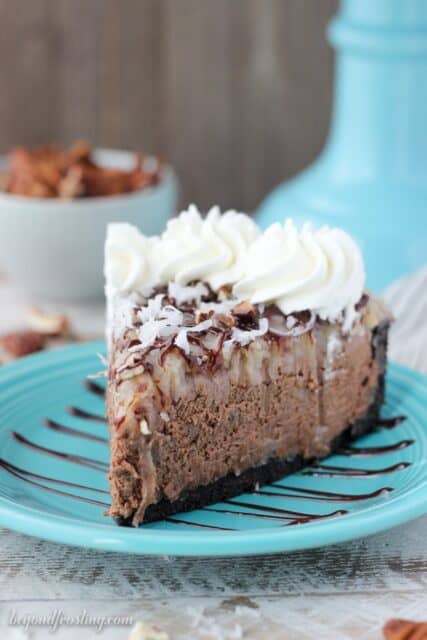 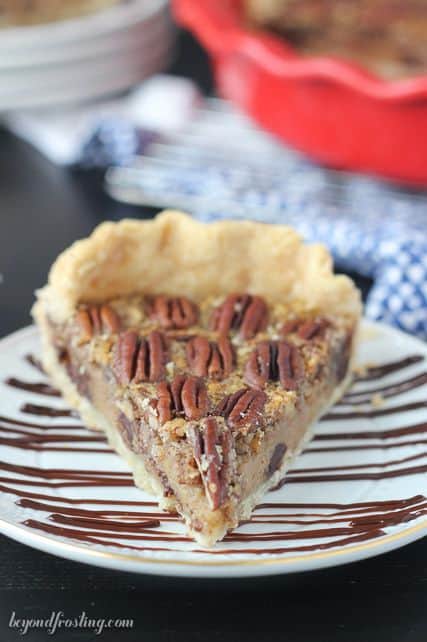