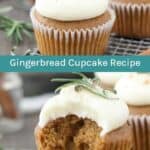 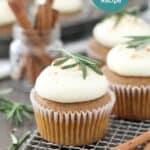 These homemade moist Gingerbread Cupcakes are flavored with ginger, all spice, cloves and a touch of nutmeg. It’s the perfect holiday treat. This Gingerbread Cupcake Recipe is topped with a cinnamon maple whipped cream cheese frosting and garnished with rosemary. 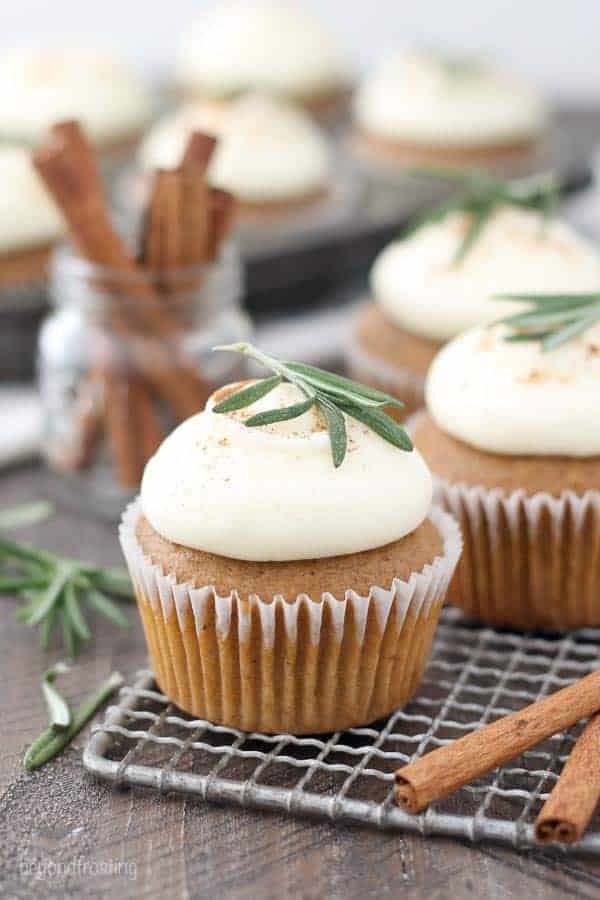 We’re getting in all those last-minute holiday-themed desserts this week! You know that some flavors like pumpkin are pretty classic and can be enjoyed for long periods of time? Gingerbread I feel like is a December only flavor. Do you agree?

I love a good slice of Gingerbread or a cupcake will always satisfy the craving.

These homemade Gingerbread Cupcakes are moist and fluffy and topped with a cinnamon maple cream cheese frosting. 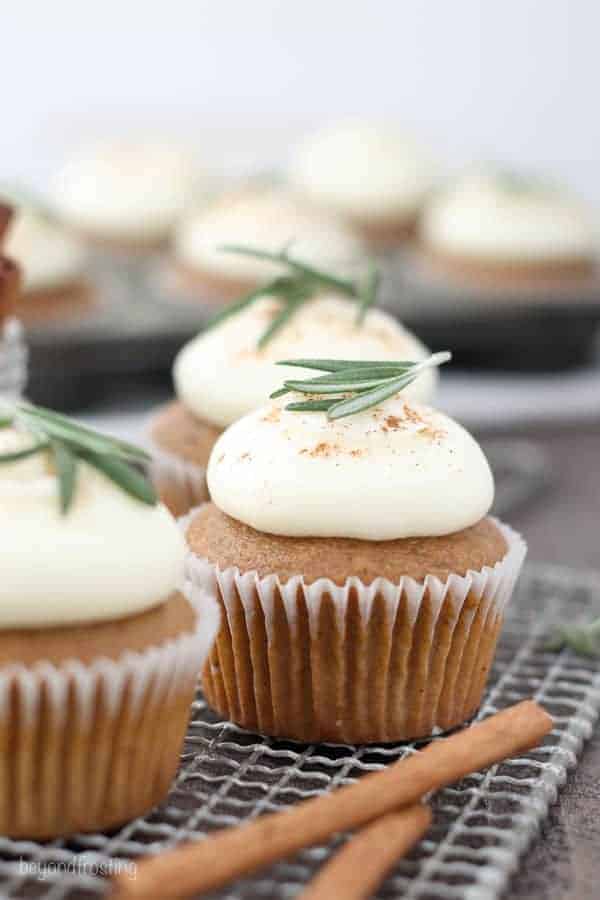 You might recognize that flavor, because I used it for my Moist Pumpkin Cupcakes, the frosting is just TOO good.

It also makes the recipe SUPER easy because you’re throwing all the ingredients together in about 10 minutes. 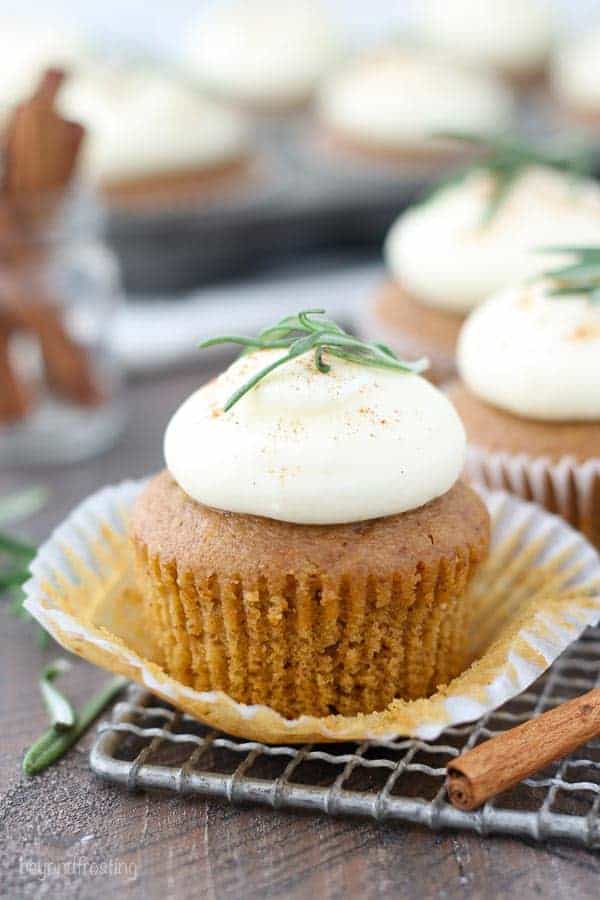 For these Gingerbread cupcakes, I used a combination of molasses and ground ginger plus some cinnamon, nutmeg and cloves. I also used both white and brown sugar to enhance the molasses flavor. You’ll find there’s plenty of spice in these cupcakes.

In order to enhance moistness of these cupcakes, this recipe contains light sour cream. If you don’t have sour cream, you can substitute nonfat Greek yogurt. Some people have used mayonnaise, but I never tried it. I do not recommend omitting it all together. 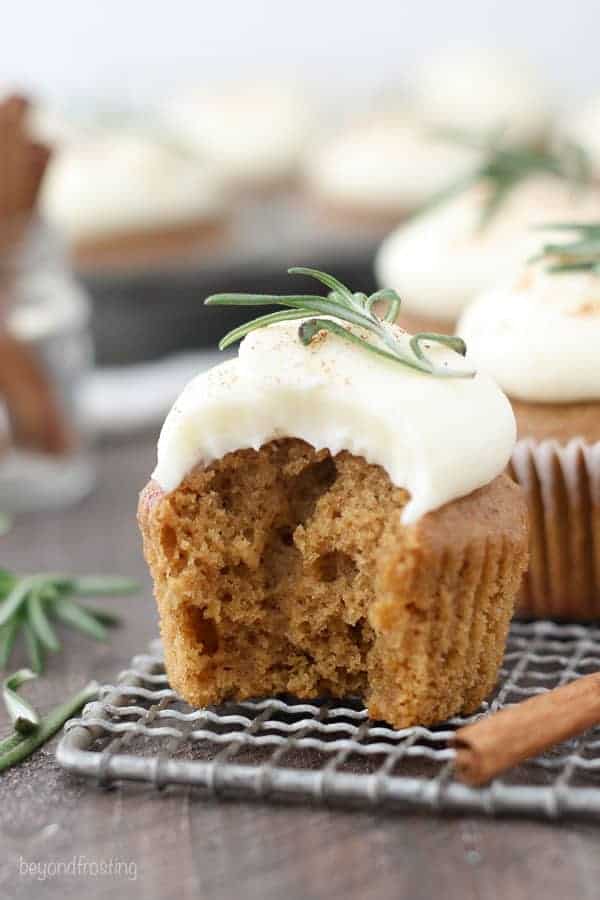 Let’s talk about the cream cheese frosting. I’m obsessed. The additions of cinnamon and maple just take it over the top.

For this recipe I start with cold butter and cold cream cheese. This helps produce a more stable cream cheese frosting for piping.

Sometimes I like to put it in the fridge for 20 minutes or so before piping to let it firm up a bit more. If you feel your frosting is too thin, definitely try this! 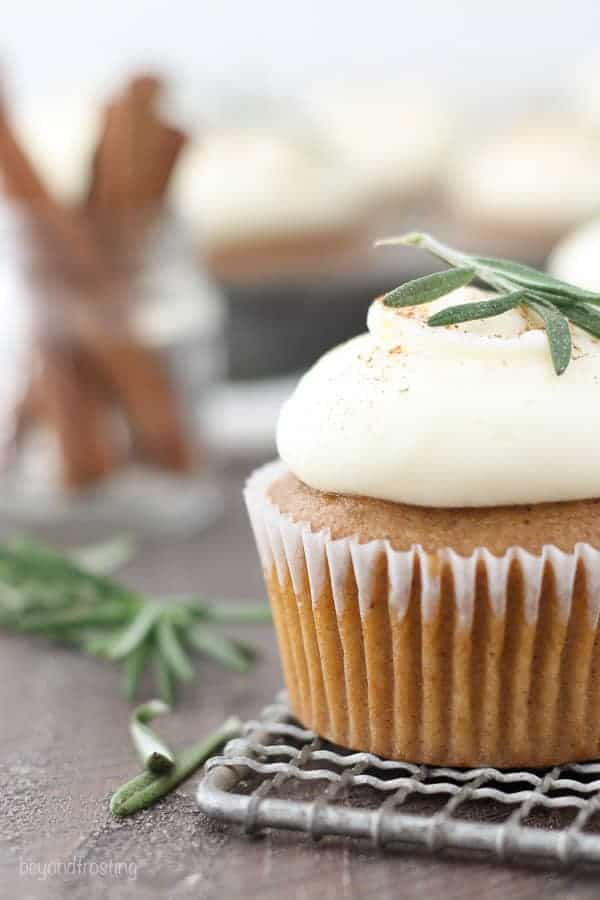 You can also prepare the frosting in advance and then pipe it the next day, which I often do. Store it in an airtight container in the refrigerator. Just take it out about an hour before you want to frost your cupcakes.

I went with a very simple piping technique for these cupcakes. If you use a large open round tip, hold it over the center of the cupcake and squeeze the piping bag and it forces the frosting out to the edges. Then I topped these with a cutting of rosemary. It’s simple and classic.

If you’re looking for a festive treat this holiday season, give these Gingerbread cupcakes a try!

These homemade moist Gingerbread Cupcakes are flavored with ginger, all spice, cloves and a touch of nutmeg. It’s the perfect holiday treat. This Gingerbread Cupcake Recipe is topped with a cinnamon maple whipped cream cheese frosting and garnished with rosemary. 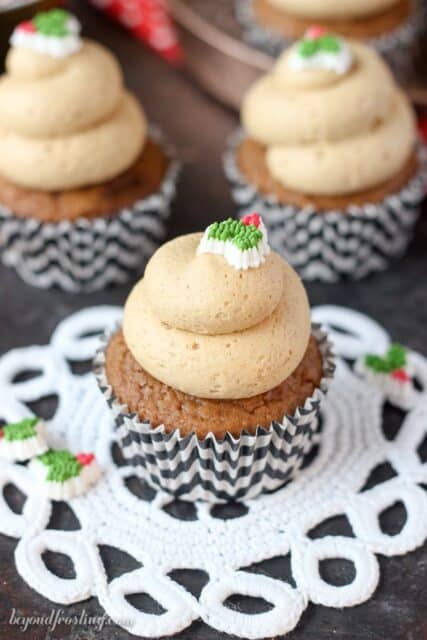 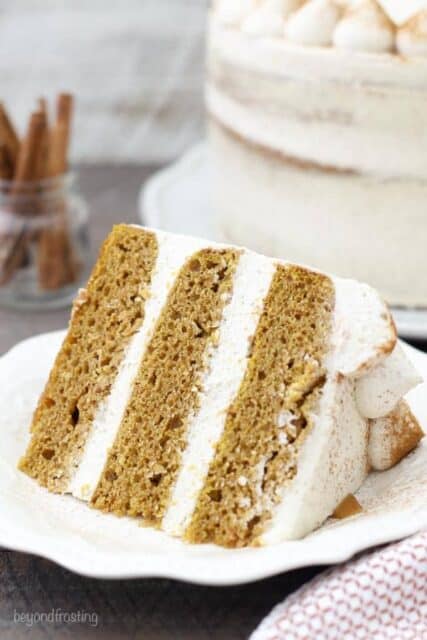 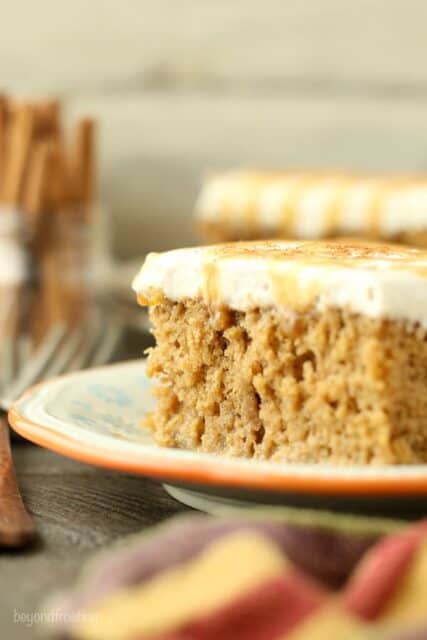