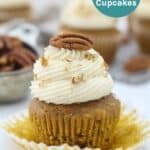 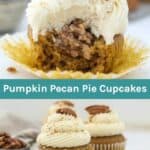 These Pumpkin Pecan Pie Cupcakes are the perfect fall treat. The moist pumpkin cupcake is filled with a bourbon pecan pie filling and topped with a buttercream frosting with hints of brown sugar, maple syrup and touch of cinnamon.

PIN THIS RECIPE FOR LATER 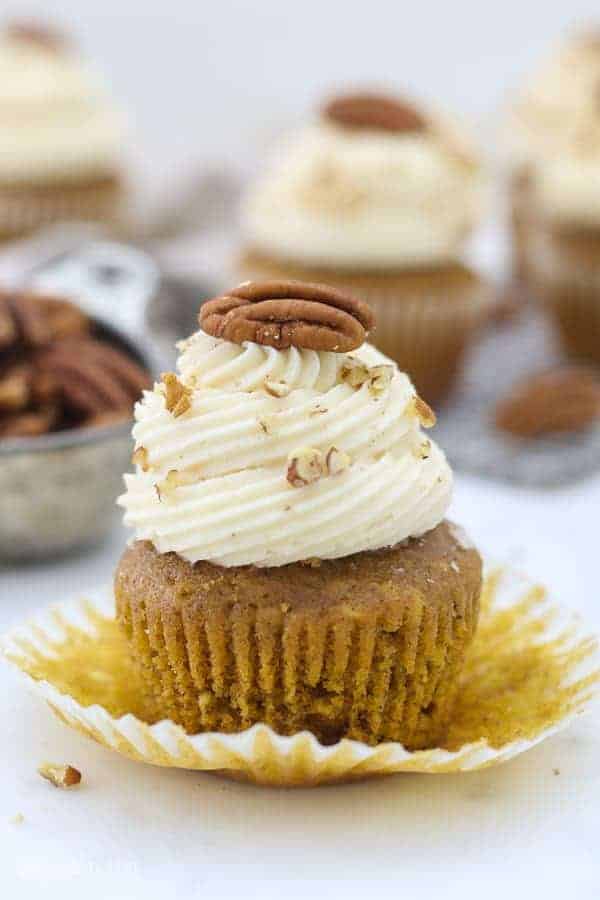 As it’s officially October, we are in my favorite month of the year! I’ve busted out my flannels and my beanies, and my boots are back in my weekly rotation. The Pacific Northwest has graced us with an early fall and we’ve already turned on the heater.

It also means there’s plenty of pumpkin cupcake and cider donuts to go around. My absolute favorite desserts this time of year.

I’ve upped the bar this year. Let me introduce you to Pumpkin Pecan Pie Cupcakes. These are my beloved moist pumpkin cupcakes filled with a bourbon pecan pie filling and topped with the most heavenly buttercream. The buttercream is flavored with brown sugar, maple syrup and a touch of cinnamon.

Bourbon, pumpkin and pecans- sounds like the perfect combination, am I right? 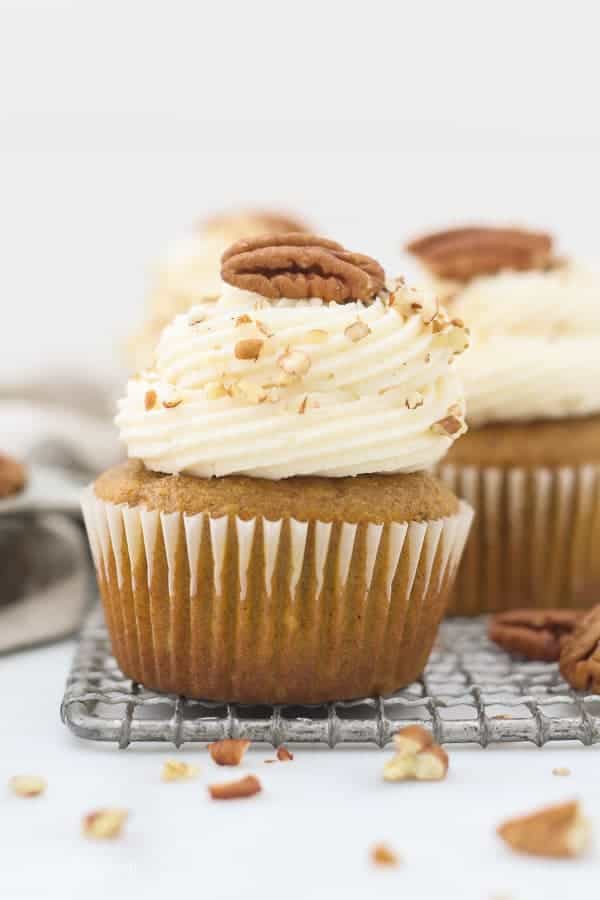 I wasn’t sure I could top my original recipe for my moist pumpkin cupcakes, but here we are folks.

The cupcake recipe is made with real pumpkin puree, brown sugar and a hint of maple syrup. It’s light and fluffy and packed with flavor. I tested several recipes before I landed on the winner, it’s my favorite seasonal cupcake to make.

I love a good pecan filling, but this time I wanted to elevate it with bourbon. Bourbon pairs so nicely with pumpkin. So, I took the recipe for my bourbon pecan pie bars and cooked it on the stovetop to turn it into a filling these cupcakes.

It’s similar to what you might imagine a coconut pecan frosting might be for a German chocolate cake. It’s prepared in a similar matter on the stovetop.

To prepare the filling, it does require you to temper the egg yolks, but it’s really easy. Just follow a few basic tips I’ve outlined below. 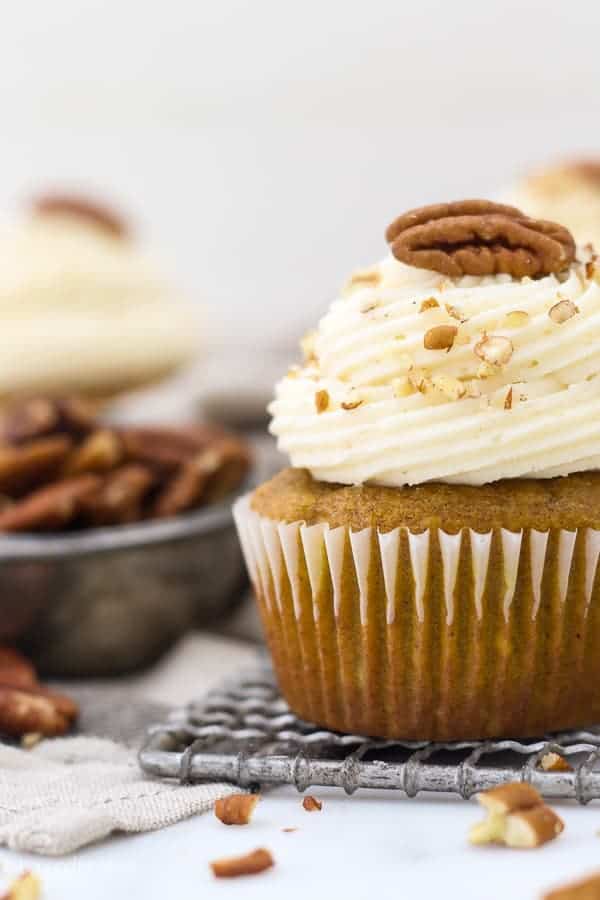 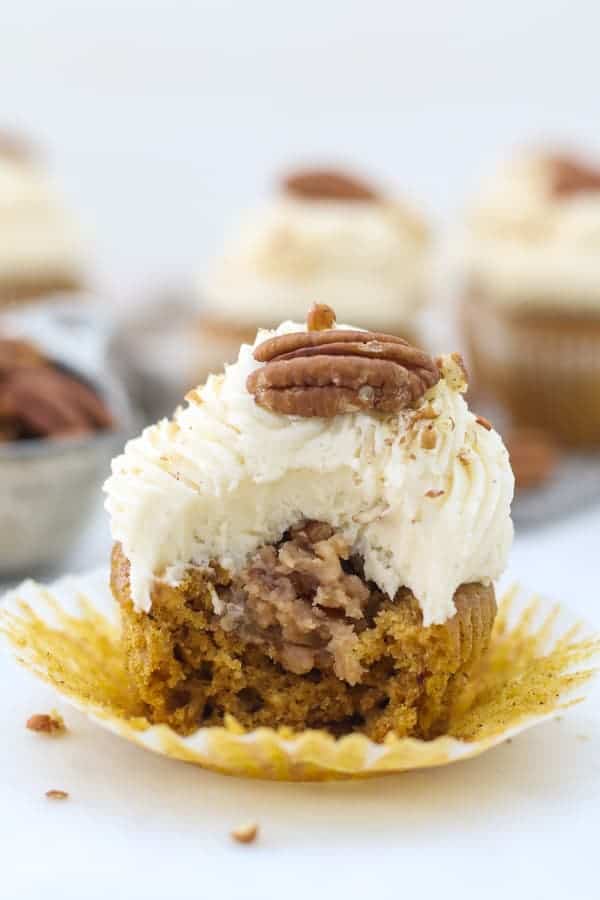 Each cupcake has about 1 tablespoons of filling. It’s easiest to use two spoons to add the filling. 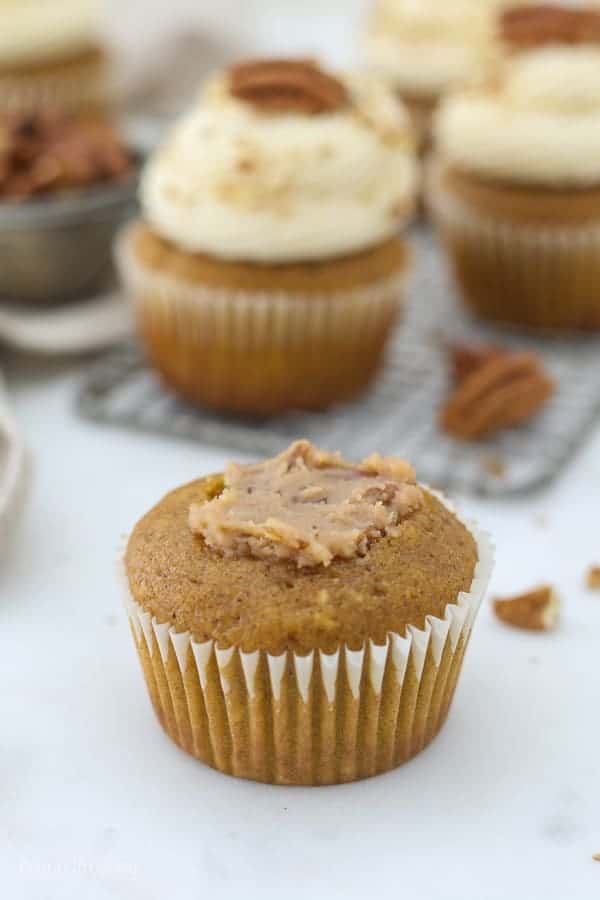 Whatever you do, be sure to grab a napkin, because after the first giant bite, you’ll surly end up with frosting on your face.

How to Make Buttercream Frosting

These Pumpkin Pecan Pie Cupcakes are the perfect fall treat. The moist pumpkin cupcake is filled with a bourbon pecan pie filling and topped with a buttercream frosting with hints of brown sugar, maple syrup and touch of cinnamon. 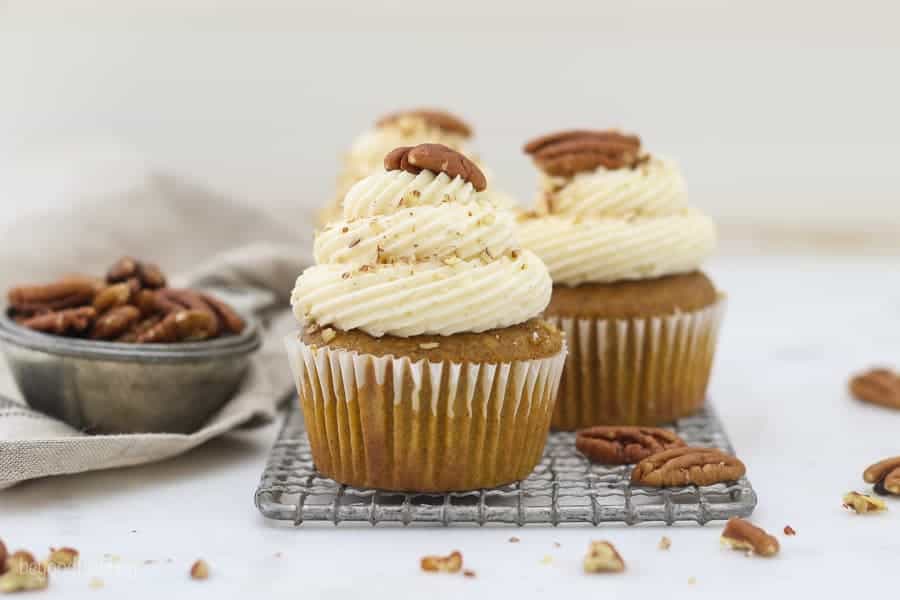